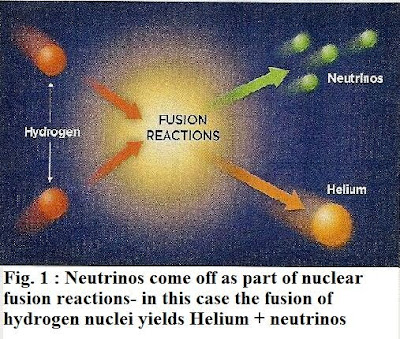 Over eight decades ago,  two astrophysicists - Hans Bethe and Carl Friedrich von Weizsäcker -   independently proposed that hydrogen fusion in the Sun might be catalyzed by carbon (C), nitrogen (N), and oxygen (O) nuclei.

Researchers now understand that this so-called CNO cycle accounts for only a small fraction of the energy produced by the Sun—roughly 1%—but it’s a dominant mechanism in more massive stars. Most of the Sun’s energy comes from a fusion process known as the p–p chain..

Both the p–p chain and the CNO cycle produce neutrinos. These electrically neutral, nearly massless particles pervade space, yet they’re maddeningly tough to pin down because they interact so weakly with matter.  This is also why previous attempts to detect these "ghostly particles" have proven so difficult.   According to  Sarbani Basu, an astrophysicist at Yale University:

"Neutrinos are very difficult to detect because they pass right through you. Hold up one hand: Tens of billions of them have passed right through  it."n

But recently, using an exquisitely sensitive detector located deep underground, solar physics researchers  (not including Basu)  have made the first direct observation of solar neutrinos. This discovery confirms a long-hypothesized mechanism for how the Sun—and other stars—fuses hydrogen into helium.

Neutrinos are a hallmark of the Sun’s nuclear reactions, and they’re a fundamental way of studying processes that occur deep within our nearest star. But it wasn’t until 2014 that researchers reported detecting neutrinos from the primary reaction of the p–p chain. Now that same research group has pinpointed neutrinos from the CNO cycle.  Why so difficult to detect?

Neutrinos have been found to occur in three "flavors"  with  different corresponding neutrino masses: m1, m2 and m3. Further, the three "flavors" are really different superpositions of the 3 basic neutrino mass states.  Moreover, we know that quantum interference between mass states means a neutrino originating in one "flavor" can transmogrify to another over its transit.
Because of the oscillations and quantum interference we need to reckon in a "misalignment" between flavor and the basic neutrino masses. This is done by reference to three independent "mixing angles": Θ 12 , Θ 23  and Θ 13. To a good approximation, oscillation in any one regime is characterized by just one Θ ij and a corresponding mass difference, defined:
D m ij2 = [m j2 - m i2]
As an example, the probability that a muon neutrino of energy E acquires a different flavor after traversing distance L is:
P = sin2 Θ 23  sin2 (l23)

Earlier reported research in Physics Today (May, p. 16, 2017) noted  an effort to track the apparent "disappearance" of electron antineutrinos from nuclear power plants proximate to the Daya Bay reactor in China.  But the measurements had shown a puzzling divergence between those applicable to models for antineutrino production in reactors.   See e.g. 
By contrast, the neutrino detection breakthrough  team (as reported in EOS: Space Science News, Vol. 101, No. 9, p. 16) used the Borexino particle detector located roughly 1,400 meters underground near Rome, Italy. (The detector’s subterranean environment shields it —but not completely—from a barrage of cosmic particles.) The heart of Borexino is a spherical tank roughly 4 meters in diameter filled with about 280 metric tons of a liquid hydrocarbon. This “scintillator” liquid emits light whenever a charged particle moves through it. If a neutrino happens to collide with an electron in the tank, the resulting burst of light is captured by photo-multiplier tubes within the detector. This design marked a literal "quantum leap" over the original gallium detectors. (Which were unable to resolve the "neutrino deficit" - i.e. difference between observed and detected fluxes).

Neutrinos from the CNO cycle can be distinguished on the basis of the "kick" they impart to electrons. As with the gallium detectors, one long-standing challenge to detecting CNO cycle neutrinos has been background contamination. For example, the radioactive decay of bismuth-210, found in the nylon lining Borexino’s innermost tank, releases charged particles that can trigger bursts of light.  This according to Gioacchino Ranucci, a physicist at the National Institute for Nuclear Physics in Milan (ibid.), and a spokesman for the Borexino Collaboration. As he put it:

“Even if it’s a small amount, it can mask the signal of the neutrinos.”

To reduce this contamination, the scientists carefully controlled Borexino’s thermal environment. They clad the detector in a thick layer of insulation and installed a heater nearby. Those combined efforts minimized convective currents within the detector’s liquid,  which is important for preventing the dispersal of bismuth-210 and its daughter products.

The research team also limited analyses to signals originating from deep within Borexino’s innermost tank, far from the detector’s nylon lining.  Last month, at the XXIX International Conference on Neutrino Physics and Astrophysics, the Borexino Collaboration reported a confident detection of CNO cycle neutrinos based on 3.5 years of data. Borexino spotted about seven of these elusive particles each day, the team estimated.

This discovery marks a major milestone in solar neutrino physics, as reported by the team of nearly one hundred in an accompanying paper.

Now for a bit of 'cold water' to dampen the enthusiasm. According to Yale’s Basu, "the error bars on the detection are still large. But they hopefully  will get smaller as more data are collected, so it’s important to keep the experiment going. Keep observing, keep observing.”

Oh, and keep checking that data too for any anomalies that may arise.