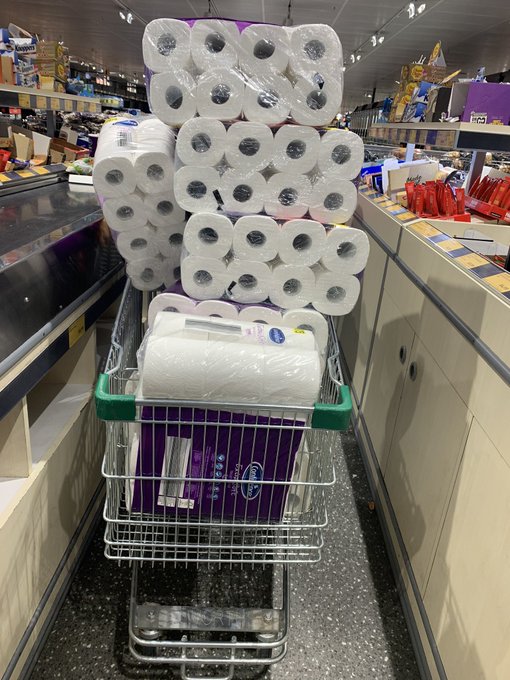 Scene in one supermarket and the panic buying person isn't even aware he stands out like a half-baked  moron.

"People should worry about the supply of ventilators, breathing masks and protective gear for health care workers, but should relax about TP."   (The Wall Street Journal today, 'The Great Toilet Paper Scare' , p. A16.

There is no doubt the frenzied stockpiling of "bathroom tissue" (aka toilet paper) has become a source of amusement for some.  Hysterical shoppers racing into stores desperate to find the 3- or 4-ply tissue so they are not reduced to using leaves- or worse alternatives for modern plumbing systems - e.g.  paper napkins or Kleenex tissues.  As  I checked out of the Safeway three days ago the cashier related how she was the receiving end of yelling and abuse from at least two unhinged female shoppers:

They shouted at the poor cashier as if she had total control of all shipping manifests from here to L.A. and back and wouldn't accept the answer that the restocking only fills one third of shelves at most and then the few items are snapped up in a minute or less when the store opens. (A slight advantage to older folks is the store opens early on two weekdays when only those over 65 are allowed, or other vulnerable, e.g. disabled, people.

What gives? Why have people gone bonkers with this toilet paper stockpiling?  Why have  (generally) sane and rational shoppers so often descended to performing cringe worthy scenes such as that shown above ?  One reason is sheer fear manifested as an "excretory and fecal phobia" as my now tenure- track psychology niece Shayle puts it.

"People in the first world see toilet paper as a proxy for civilization.  Not to have it means they descend into a proto-primitive state in which they are in closer proximity to their primary excretions. It's appalling for them to even consider other practical options - like washcloths- which do not eliminate the sight and smell so easily."

Another professor, Rohan Miller from the University of Sydney, believes it is a reflection of an urbanized society and lifestyle where modern convenience reigns supreme.  (A point with which Shayle also concurs.)  As Prof. Miller puts it:

"We're not used to shortages and scarcity, we're used to being able to pick and choose what we want, when we want. So the rush to get toilet paper is just this sheep mentality to maintain that status,"

"I think people want to make sure they have some comforts in their lives if they're going to be shacked up with their family for a long time,"

Maybe  Prof. Miller and Shayle have a point. In any event she has no issues nor have my other nieces who all use portable bidets. No need for paper at all.  As Shayle notes "The stuff is toxic to the environment."  See e,g.

Excerpt from a quote by Sue Mcmillin:

"Millions of trees in virgin forests are being logged every year and turned into pulp for toilet paper, tissues... that we use only once and  flush or throw away. Boreal forests in Canada are being destroyed for our tushes."

Meanwhile, many news columnists and online commentators are flummoxed over the need for an item which, were it to run out, does have rougher substitutes.  On the prostate cancer survivors' (Team Inspire) Group one whole thread was devoted to Pandemic-Toilet Paper?  This is a rational concern for many especially who have had any kind of radiation therapy, especially brachytherapy. (Notably the type for which "seeds" are implanted into the gland).  The usual complaint is frequent bowel movements from the radiation's effect.  Hence, if a patient who's just had brachy has to run to the toilet 10-15 times a day it can be serious. The general tenor of questions ran long the lines of: "What can we do instead if there is NO toilet paper?"

The most immediate responses to come back were "You can always use a washcloth (or washcloths) then soak them in a bleach solution."

But then again, there may be no chlorine bleach to be had. In The Denver Post Saturday, under one particular piece ('Toilet Paper Shortage: Plumbing Pros Warn Against Clogging Pipes', p. 7A), one of Denver's Roto Rooter experts (Kyle Ray)  offered this advice (clipped from article and scanned):

Mr. Ray before delivering this stellar and common sense advice, also imparted the No-No's that those caught without T.P. should never ever do. These include:

- Use of paper towels, napkins and other "atypical wiping material"

- Facial tissue "is another bad idea can be used in place of toilet paper in small amounts, if flushed frequently"  How much? No more than 1-2 sheets, preferably 1 per flus.

- Flushable wipes - even if they say "flushable" - "Are just too thick and don't break down".  So if you use them you risk a toilet backing up.

Consumer psychology experts - in a "duh!' demonstration - mostly agree the behavior is "obviously irrational".  It's also a clear example of herd mentality whipped up by  news coverage of empty shelves, and social media  hysteria (Some of it fueled by wacko conspiracy ideations.)  Part of it is also driven by the ubiquitous FOMO syndrome - or Fear Of Missing Out.  The pictures of bare aisles haven't helped.  This entices other (once sane) shoppers to then go nuts and also grab multiple huge packs if they are available.  All of which makes life hard for those who may really need the stuff, say like prostate cancer radiation therapy patients.

Of course, supermarkets and box warehouse stores (like Costco, Big Lots etc.) could easily put the kibosh on this nonsense by simply limiting each customer to one purchase of a large multi-pack at one time. This is already being done in Barbados, as well as a supermarket chain in Dallas (according to The Dallas Morning News).  Also, this a.m. at our Safeway, toilet paper was in stock (Viva, Aisle 4) and the cashier told me the store had a one 8-pack limit per customer.  About time!

One thing we know, according to multiple pieces in the WSJ, is the warehouses of the manufacturers are laden with product. The only problem, if there is one, is getting the supply chains to run more expeditiously - and again, this could be helped if people were more rational in their purchases - and weren't seized by the stockpile syndrome, almost always driven by fear.  Look, in a worst case scenario - presented in this report, released last Monday by an epidemic modeling group at Imperial College London -  we could be in lockdown mode for 18 months or until a vaccine is widely available.  That doesn't mean we run out of T..P. only that people purchase it and other items (e.g. hand sanitizer) in a judicious and rational manner.  It means a sense of self-rationing of supplies, even if the state or federal gov't won't or stores are too timid. It means, in essence, the cooperative attitude of Americans during World War II.

Prof. Miller's final  point is one well worth considering:

"Toilet paper doesn't really matter - it's just so far down the survival list compared to other things like food or water - but it's just something many people in the developed world need to preserve at least the veneer of civilization....and creature comforts!"

How to Wage War, FDR-Style, on Our Pandemic


The Price Gouging of Crystal Balls and Tin Foil Hats
Posted by Copernicus at 6:43 AM