The Public's "Exhaustion" Is Irrelevant: House Dems Must Proceed With Hearings And Impeach Barr 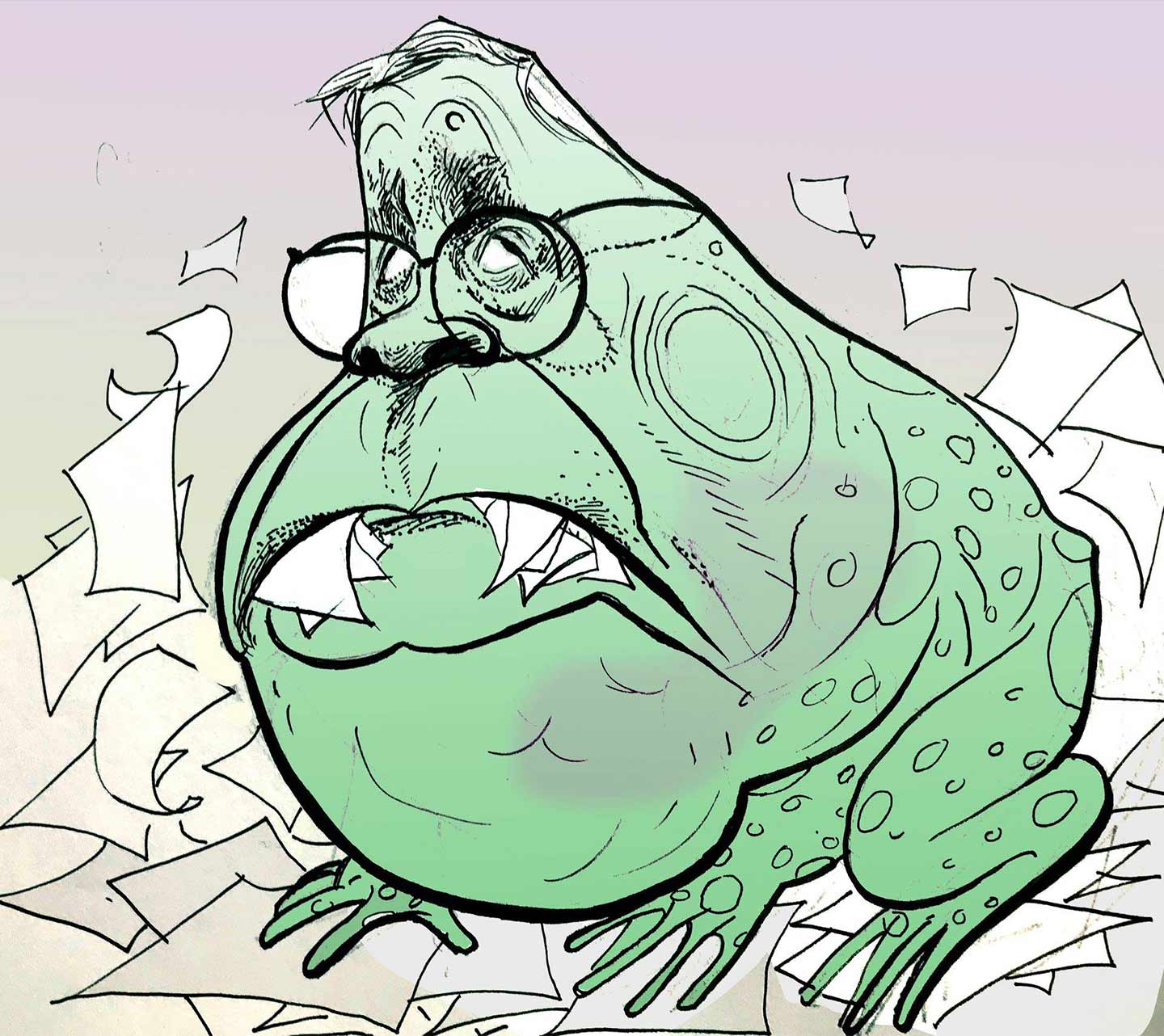 "Gee, I'm just doin' my job sittin' on the real Mueller report for the Donald!"

"You had Harvard and Yale educated Republican lawyers on the U,S, Senate Judiciary committee. And they sat there and listened to the attorney general of the United States say that any president, if he feels an investigation is unfair, can shut it down.  That is banana republic stuff! That is North Korea. That is Russia! That is China!  What separates us from those countries - and those guys know it - is respect for the rule of law."  - Claire McKaskill, on 'Morning Joe' today.

"Yours is a Republic, if you can keep it!"  - Benjamin Franklin

"The price of liberty is eternal vigilance." - Patrick Henry

" The attorney general is corrupt. The congress is dysfunctional.  What good is leaving a road map for impeachment if you know a tribal, party-before-country Republican Senate will never remove the president?  Bob, your trail of bread crumbs just isn't good enough. We're just not that smart anymore! America is now an aging shortstop.  You have to hit it right at us."  Bill Maher on Real Time Friday, April 26,telling Mueller his report revelations and conclusions were too indirect.too

It is inconceivable that while we are currently in one of the most critical pivot points in American history, a seeming majority of the American public is screaming 'Enough of Mueller already!"  This according to a recently released NBC-WSJ poll that showed 56 percent are "exhausted" and want no more to do with Mueller, his report or the Democrats' efforts to hold hearings,  or subpoena Trump tax files and other documents.  This sorry state - if true - elicits the question: Are Americans still prepared to exercise eternal vigilance to preserve their liberty, constitution and Republic, or are they too lazy and distracted? So much so they just want to punt it away?

The attitude now, in the wake of unprecedented contempt of congress and Trump stonewalling, appears to be "It's just Trump, that's how he is. Enough already!"  Not that his actions, orders and toadies - like Barr - are setting a slew of dangerous templates that don't bode well for the future of this country or the existence of democratic principles - far less respect for the constitution. (Which, btw, both Barr and Trump swore to uphold.)

Take the case of the office of attorney general now defiled almost beyond recognition thanks to Barr's lies, cover-ups and other mischief. Let's understand here this office is a unique one in American government. To briefly review: The Department of Justice (DOJ) though it is part of the executive branch is supposed to be wholly independent of the president and hence the arbiter of fairness.

By contrast, the Toad Barr has worked feverishly as an apologist for Trump, starting with a 19 page memo he released, had published some months ago. In that screed, this toad averred a president cannot be held guilty of obstruction of justice, especially if he was "falsely accused" and it "negatively affects his ability to govern" .  Worse, as legal specialist and attorney Rikki Klieman pointed out on CBS this morning, Barr under separate testimony has insisted if any president believes he is being falsely accused he "has the right to get rid of that accuser."  In Klieman's take: "That is a very dangerous precedent indeed."

In fact, it turns on its head the whole constitutional notion of checks and balances and the legislative branch having oversight over an executive. Or as former Watergate reporter Bob Woodward so aptly put it this a.m. ('Morning Joe'):  "I feel innocent, so the investigation has to go away."

Thus, if the executive doesn't cotton to the "accusations" of the legislators he has the "right" to ditch them, or in Trump's case negate their powers by refusing to allow aides to testify or documents to be released. Even to the point of ignoring subpoenas!  This is serious shit, folks, not some parlor game. Our nation's integrity and future as a constitutional Republic is at stake - and yet 56 % in a poll want us all to just "move on"  like brain dead zombies or imbeciles.

Back to Barr:  As the second most corrupt attorney general in American history (after John Mitchell) continues his display of contempt and obstruction of justice - by refusing to appear today before the House Judiciary Committee- it is time to bring the hammer down. That means not only citing this execrable toad for contempt of congress but moving to impeach him as well.   This is especially now in the wake of Bob Mueller's letter after William Barr released his brief summary or as he likes to call it "conclusions in a nutshell."  Mueller, not too happy about Barr's degenerate presentation, wrote in the wake of its release: "There is now public confusion about critical aspects of the results of our investigation. This threatens to undermine a central purpose for which the Department appointed the Special Counsel to assure public confidence in the outcome of the investigations."

The letter in its totality was described as laying out Mueller's concerns "in stark terms that shocked Justice Department officials".

Worse, in the wake of letter's release the Toad Barr lied shamelessly, insisting that when he pressed Mueller on whether the memo to congress was inaccurate, Mueller replied "he did not".  Instead "he felt that the media coverage of it was misinterpreting the investigation."

Which was total "bull pockey" in the parlance of Rachel Maddow last night, and more colorful choice of terms for Janice and myself. But this is now why the House Democrats need to have Mueller appear and testify in open hearings, in public.  As Ms. Klieman said:

"There is no doubt that if we didn't think we needed to hear from Robert Mueller before yesterday's testimony, by the end of yesterday we certainly know we do.

So who has the primary evidence? Well Robert Mueller!"

When CBS co -anchor John Dickerson tried to play Devil's advocate and defend Barr ('Well Mueller left it in Barr's lap, so Barr made the call') Klieman shot back:  "But it certainly could be said Robert Mueller intended to leave it in congress' hands. Don't you think that congress has the right to ask that question? "  Dickerson then asked:  "Well the special counsel's handed it all off, why does he have to do any more?"  To which Klieman replied:

"Because we don't know and congress doesn't know.  When he looked at approximately ten episodes with sub episodes beneath them, Don McGahn - legal counsel for the president - gave the most egregious example we can lay our hands on."

So there's no issue that Mueller has to appear, speak for himself  with no more filters- to congress and the American people -  to better educate them on the facts as opposed to Barr's omissions woven into a false narrative.

As a pundit also observed on 'Morning Joe', "this has now fired up again the Russia investigation, and Bob Mueller will be in the chair for hearings, so this will go on and on and on."

And so let it be. And any people without the minds or degree of attention to learn more and demand justice can go off and play Kandy Crush, Fortnite or whatever other mindrot now passes for entertainment.   We don't need unthinking parasites or pseudo- citizens, who likely won't have the interest (self or national) to vote anyway,

As for the Democrats, more aggressive options to deal with the Trump admin's refusal to cooperate are now being sought.  These include the impeachment of Barr, as well as fines imposed on all aides who don't acknowledge or adhere to subpoenas - and even jail time for assorted scofflaws - high and low.  The rule of law must be adhered to and not based on whim, preference or fancy.   Oh, and it has to start at the top.

Time to bring the hammer! And start with the Toad called Barr!  As for the wimps who claim to have had their fill and "can't take any more", they deserve neither liberty, security or to live in a democracy. Let them take their sorry ass hides to a real autocracy - say like Russia or Turkey. I'm sure they'd be a lot happier just living under a strong man like Putin or Erdogan, and not having to lift a finger or work their brains toward exercising any vigilance.


What could the Committee do? Hold Barr in contempt of Congress—under Congress’s inherent power to get the information it needs to carry out its constitutional duties. Congress cannot function without this power.

Under this inherent power, the House can order its own sergeant-at-arms to arrest the offender, subject him to a trial before the full House, and, if judged to be in contempt, jail that person until he appears before the House and brings whatever documentation the House has subpoenaed.

When President Richard Nixon tried to stop key aides from testifying in the Senate Watergate hearings, in 1973, Senator Sam Ervin, chairman of the Watergate select committee, threatened to jail anyone who refused to appear.

Congress hasn’t actually carried through on the threat since 1935—but it could.


Would America really be subject to the wild spectacle of the sergeant-at-arms of the House arresting an Attorney General and possibly placing him in jail?


Probably not. Before that ever occurred, the Trump administration would take the matter to the Supreme Court on an expedited basis.

Sadly, there seems no other way to get Trump to move.