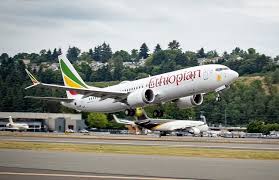 Ethiopian Air MAX 8 jet of the type that crashed with 157 on board.

"Boeing has imported the defense contractor ethic to commercial aviation. Cutting corners is a way of life. Engineering decisions are made for bureaucratic, not safety reasons. It's all good if you spread your manufacturing and political contributions around to enough congressional districts."  - Comment on story in NY Times  ('New Evidence In  Ethiopian 737 Crash Points To Connection To Earlier Disaster')

We now are aware how spot on the above comment on Boeing's process was in terms of learning that these corporate renegades made two added safety features "optional".   This as the company is being subpoenaed by the DOJ's fraud unit, including to maintain all emails, data, records, and ancillary documents to do with the approval process for the MAX 8 jet.  We now know this was via "self-certification", i.e. the 'fox guarding the henhouse model', e.g.

How the FAA allows jetmakers to ‘self certify’ that planes meet U.S. safety requirements

This was in the wake of also having learned over a week ago that the Indonesian (Lion Air)  pilots lost their battle with the M.C.A.S.  (Maneuvering Characteristics Augmentation System)   because of the MAX's  faulty sensor readings.  (WSJ, March 13, p. A13).

A preliminary report on the Oct. 29 Lion Air Flight 610  crash found that a device known as an “angle of attack” sensor had mistakenly indicated the plane’s nose was too high, prompting the plane’s automation software  (denoted  MCAS)  to push the plane downward.

Boeing’s MCAS and software "fix" in conjunction with the potential for faulty sensor readings showed that the plane maker  recklessly shipped the 737 Max with a single point of failure, a potentially dangerous anomaly in aviation.   What that means is a single error or oversight - or failure to quickly respond -  could bring catastrophe if the anti-stall system kicked in and pointed the plane's nose down.

But instead of making two safety features ("disagree" sensor  and extra angle of attack sensor) available as standard parts of the plane, Boeing only provided them if purchased as "optional upgrades". The first one would warn pilots if the anti-stall (MCAS) system could activate unnecessarily, the other provided a separate reading for the angle of attack - i.e. to confirm the first.  Either or both of these present in the Lion Air 610 or Ethiopian Air  302 flights could have averted the respective catastrophes.  This now that aviation specialists believe the anti-stall systems kicked in repeatedly triggering nose dives in each plane.

Despite that, one nincompoop former FAA Director of Accident Investigations (Jeff Gazetti),  quoted this a.m. (CBS This Morning),   asserted that whether or not the Lion Air pilots had access to the safety features  they should have been trained to handle the issue. As the ignorant twerp spouted:

"It's the culture of this airline, it seems, in not aggressively handling the maintenance issues  as well as in flight non -normal situations."

Right! Blame it on the culture of the victims or failure to act instantly in an emergency, you lackey!  But as one pilot quoted on an NBC News segment last week put it, "I don't know that I'd remember to hit those TRIM switches (together - there are 2 side by side) in an emergency" and one former Southwest pilot made it even more plain before this former FAA accident investigation director's broadcast  codswallop:

"The fact that this airplane requires such jury rigging to fly is a red flag."

Besides, dozens of U.S.  Pilots complained of inadequate training on the MCAS planes, unfamiliarity with the controls,  and anxiety that prompted them to engage the auto­pilot earlier than normal. (Because the system was supposed to work in the background, Boeing believed it didn’t need to brief pilots on it, and regulators agreed. Pilots also weren’t required to train in simulators.)

In at last two instances the plane pitched downward or maneuvered against pilots’ inputs.  Much of this was elaborated on MSNBC over a week ago, e.g.

The knock on the Lion Air crew that they ought to have disengaged the MCAS is also irrelevant, given Boeing already admitted its flight manual was incomplete- as well as training (two 35 minute Ipad sessions).  It also didn't provide all the information needed to control the jet in event of a dive, or even alert pilots to where the disconnect (TRIM) switches were located. As one furious pilot put it: "That part of the plane’s flight system is not described in our Flight Manual"   adding,  "It's inadequate and almost criminally insufficient.

In other words, the single point of failure design of the 737 MAX 8 (without supplemental check sensors)  amounted to a calculated gamble with passengers' lives.  A gamble that - very seldom if ever- would this single failure point actually materialize.  Two major crashes with the same aircraft in 5 months shows how wrong Boeing was- and how its "cost -benefit" analyses were off the mark.

We also now know the disagree sensor with its blinking red light has been an available (optional) feature on Boeing planes since the 1990s. But there was little need for it before the advent of the redesign of the Boeing 737.  To remind readers,  in a rush to beat its Airbus competitor Boeing chose to retain an older airframe and 'marry' it to a newer, marginally more fuel efficient engine.  That ploy - uniting old plus new-  saved Boeing  4 years of development time, i.e. if they'd instead designed a totally new aircraft. The continuity with the older 737 was also part of Boeing’s pitch to the F.A.A. and airlines: Because the plane's basic design was retained it could be handled like previous 737s. Hence,  pilots would not need to be retrained to fly it.

According to Rick Ludtke, an engineer of 19 years at Boeing: "The company was trying to avoid costs and trying to contain the level of change. They wanted the minimum change to simplify the training differences, minimum change to reduce costs, and to get it done quickly.”

The  Boeing engineers then had to figure out a way to make the odd match work.  The pace of the effort on the 737 Max was frenetic and engineers were pushed to submit technical drawings and designs at roughly double the normal pace.  With such a helter-skelter tempo corners were bound to be cut, and they were.  Especially after it was realized that to make this abnormal mating work the engines needed to be placed more forward on the wing.

But this  altered  the aircraft's lift characteristics, and placed more stress (at takeoff) on the horizontal stabilizers - oh and the jackscrews to control them.   This in turn led to the need for the introduction of the software and sensors tied to the Maneuvering Characteristics Augmentation System and its anti-stall triggering.

Boeing, to make it short, created a problem via pure commercial expediency,  and to preserve its market share. It then added a 2nd problem (the MCAS) to correct the first.  Thus, Boeing kept the old airframe but included bigger MAX engines and mounted them farther forward on the aircraft's wings.  Tests then showed a configuration that could push the nose upward toward a stall in certain circumstances. To compensate for that, Boeing installed the MCAS to automatically push the nose down to counteract those forces.   Trouble is,  you've now engendered two unnecessary complexities to an otherwise perfectly working (but less fuel efficient)  aircraft not there before, and made it potentially unstable.

Bottom line, had the plane not been aerodynamically altered in a reckless rush to beat Airbus, the MCAS  wouldn't have been needed. As aviation journalist Chris Van Kleef explained on a CBS segment this morning:

"What changed was the importance of these sensors and their link to this anti-stall system which is brand new to the MAX.  In hindsight, Boeing failed to appreciate the importance of those angle of attack sensors, and that both be linked to the anti-stall system, and that the pilots have a clear understanding of what's going on with those two sensors.  Those features went from optional to really important."

Bingo!  But now, in retrospect, we see that 346 had to pay with their lives before Boeing grasped its crass profit over people,  optional safety features  model was to blame.  As CBS's Bianna Golodryga so aptly put it :  "It's not as if we're asking for extra plump seat cushions!"

Let us hope before this is all over, Boeing's corporate geniuses also grasp it's not a great idea to charge more for planes to have a backup fire extinguisher for the cargo hold! In fact, let's hope this abnormal, unstable machine never takes to the skies again! Especially as we've since learned (from former workers)  that the internal assembly designs for the Max still include omissions today. For example, not specifying which tools to use to install a certain wire, a situation that could lead to a faulty connection. Think of short circuits,  electrical fires.

Airbus, time to take control over your compromised  U.S. competition.

"One expert explained that the optional features are “critical, and cost almost nothing for the airlines to install,” and that “Boeing charges for them because it can. But they’re vital for safety.”

Perhaps the airlines purchasing the Max 8 aircraft from Boeing didn’t realize the safety features would make the difference between life and mass death. Perhaps, like Boeing, they were trying to cut costs and maximize profits—no matter the consequences."