Yes, Trump Is A Felon, Who'll Be Locked Up As Soon As His One Off Term Is Done 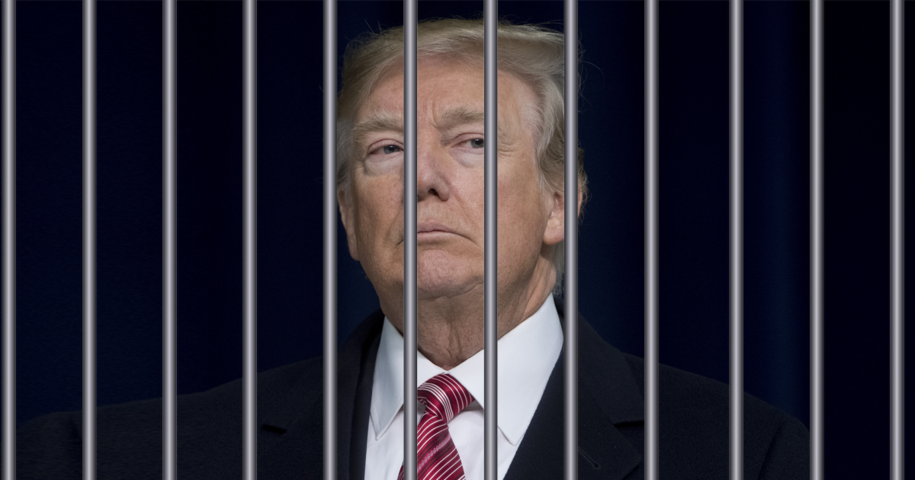 With last week's  two court filings made by federal prosecutors  out of the Southern District of New York(SDNY).  it's now clear the current resident in the White House is a felon.   Reading the applicable documents (in the link above) one readily sees that Trump  (denoted "individual 1")  directed his then adviser-lawyer, Michael Cohen, to make illegal payoffs to two women who claimed to have had sexual relationships with Trump, implicating the Dotard in the violation of campaign finance laws. They recommended that Cohen receive a prison sentence of about four years.  In the filing, it is also clear that in the process of spelling this out Trump is a so far unindicted co-conspirator.

Let's now get this in perspective: The Dotard's own Justice Department is claiming that he has committed campaign finance violations, paying hush money to two mistresses: Stormy Daniels and Karen McDougal. By virtue of this hush money ploy it thereby followed he was trying to manipulate the 2016 election result by buying the women's silence. (Given that had the story materialized charges would have been filed at the time and Trump's odious campaign would have crashed and burned.)

Note that this is all a separate creature from the Russian conspiracy  (not 'collusion' since there is no federal statute for that) that Robert Mueller is pursuing.  While it is true Mueller said in his own court filing that Cohen had provided him “useful information” on matters at the core of the Trump-Russia investigation,   it is also clear from the separate SDNY filing that Cohen was not as forthcoming with the facts of how and  why Trump had him pay off two mistresses in order to keep his campaign violations secret- and thereby sneak into the White House as a felon.

In their  separate filing, federal prosecutors in New York said Cohen “acted in coordination and at the direction of” Trump when setting up payments to buy the silence of Karen McDougal, a former Playboy model, and Stormy Daniels, a pornographic actress, who were considering making public their allegations of affairs with Trump.  Cohen and Trump paid the women to suppress their damaging stories and “to influence the 2016 presidential election”, according to the filing .  As I noted in a previous post this is a major no-no and indeed, a felony.  A candidate simply cannot hide his campaign finances or redirect them to outside ends to secure his nomination, or election. It's that simple.

Of course, the inbred hillbilly and Trump toady Sarah Sanders, told reporters the filings contained “nothing of value that wasn’t already known”, saying Cohen had “repeatedly lied” and was “no hero”.  But she misses the point as anyone with even non-Mensan IQ can see. That is, that Trump is clearly named as the primary Cohen instigator (and hence felon), directing his thug to buy off the women. A 2-bit Queens thug, grifter and conman hiring another guy of similar pedigree to do his dirty work for him. Who'da thought?

The SDNY prosecutors added that Cohen was motivated by greed and “repeatedly used his power and influence for deceptive ends", noting:

“After cheating the [Internal Revenue Service] for years, lying to banks and to Congress, and seeking to criminally influence the presidential election, Cohen’s decision to plead guilty – rather than seek a pardon for his manifold crimes – does not make him a hero.”

Furthermore, Cohen's perjury didn't end with his lies and omissions to the SDNY   Cohen previously pleaded guilty to lying to Congress about Trump’s plans to develop a building in Russia. He admitted the project continued well into Trump’s campaign for the presidency – contradicting Trump’s account – and that Cohen spoke with a Kremlin official about securing Russian government support.

In other words, we have direct evidence of a devious and nefarious synergy between Trump and the Russkies,  that permeated the Trump campaign.  Let's clear the air here and state emphatically that Trump is guilty of at least two felonies and hence two impeachable offenses.  Sadly, the putative future Dem Chairman of the House Judiciary Committee (Jerry Nadler) seems not to grasp that impeaching Trump is not just a matter of political calculation but of holding him accountable.  As MSNBC's  Lawrence O'Donnell' made clear to Nadler last week any failure to impeach Trump now - even if it doesn't lead to indictment (by the Senate) -means that Trump and any followers will believe he's above the law. (Jerry kept telling Lawrence the Dems "need at least twenty Republicans" - but that is only for indictment in the Senate, not impeachment.)

This cannot be allowed, and that also means skewering the rabid distortions and diversion efforts apparent in the WSJ's editorial today ('Wrap It Up, Mr. Mueller'. p.  A16) in which these lackeys for Rupert Murdoch actually compared Trump's violations to those of John Edwards in 2012 ("for payments made by campaign donors to his mistress.").  But that's comparing rotten apples to fresh oranges.  As Kelly Ann Conway's better half (George) put it, directed at Dotard's tweet that he did nothing and nothing was found:

"Except for that little part where the US Attorney’s Office says that you directed and coordinated with Cohen to commit two felonies."

In Edwards' case there was no conspiratorial direction to intentionally commit felonies. Mucho difference, my friends!  And further,  it isn't a simply reductive case of "lying about sex" as the WSJ's nabobs try to portray it. It is paying hush money to hide the felonies to secure a nomination via fraud, and also an election!   The WSJ editors whining about the length of Mueller's probe is also choice, i.e.  "Mr.  Mueller has been investigating for 19 months....the country deserves an account of what Mueller knows not more dribs and drabs in sentencing memos."  Aw, boo hoo and hoo, cry me a river.  For reference, Mueller is a professional and is aggregating millions of times more real data - including financial -  than Ken Starr used to go after Bill Clinton, for a blow job  And that farce took years, way more than 19 months

Hence, whether an impeachment brings more polarization or division  as Nadler fears (and the WSJ's op-ed trolls anticipate), is irrelevant to the need to impeach the vile maggot in the White House.  What we don't need is more bullshit and disinformation from the likes of the WSJ to try to run interference for the Repukes and obscure the issue for too many 'Muricans.

Still on Sunday's CNN interview  - almost as if precognitively channeling the WSJ codswallop published today  - Jerry Nadler continued his verbal parsing by stating, in regard to the SDNY prosecutors' charges:

"They would be impeachable offenses. Whether they are important enough to justify impeachment is a different question."

Actually,  Jerry is overthinking the issue. IF they are indeed impeachable offenses, then it is manifestly clear that they warrant impeachment, no 'ifs, ands or buts.  What Nadler is really worried about is enraging the Trumpie base, when he spoke on Lawrence O'Donnell's 'Last Word' last week.  But enraging the Trumpie base is what I would call acceptable collateral "damage" if it means refusing to allow the slime ball cretin in the White House to get away with his crimes. And that was also Lawrence O'Donnell's point in his retort to Jerry.

Jerry needs to grow a pair, and grasp that if this foul fungal biped attempted to manipulate the 2016 election result by coercing his mistresses into secrecy then he is guilty.  As a great statesman once put it: "Let justice be done or the heavens fall!"

And hey, at least it's not as violent (or permanent)  as hanging him!

On another sorry note, it appears a Reeptard Senator named Mike Lee is threatening "civil war" if Dems don't toe the line and limit the federal gov't instead of expanding it.   See e.g.

Evidently these Reepo imps like Lee aren't satisfied with repealing the voters' will in WI, NC and MI, they now want a war too. Well, bring it on, Mikey!

https://brane-space.blogspot.com/2018/08/why-didnt-manafort-jury-find-him-guilty.html
Posted by Copernicus at 7:23 AM