The WSJ op-ed ('Doomsday Climate Scenarios Are A Joke', p. A17) makes the usual blunders in assessing the anthropogenic aspects of greenhouse warming on our already over-stressed planet. To remind readers, the temperature of the planet is currently out of balance by 0.6W/ m2  and this is almost entirely due to the annual rate of CO2 concentrations increasing. Every increase in CO2 concentration by 2 ppm increases the radiative heating effect by 2 W/ m2.

Go to climate research centers such as at the Geophysical Institute of the University of Alaska- Fairbanks and you will find atmospheric science researchers examining ice core samples dating from nearly 600,000 yrs. ago showing rising CO2 concentrations coinciding with much warmer periods.
In addition, one has permafrost - bearing methane, as in interior Alaska. When the permafrost melts, the methane can be released. For example, the submerged East Siberian Arctic Shelf contains much of the same stored carbon as the dry tundra to the south but also at least 17 teragrams of methane. (One teragram is equal to one million tons). See e.g.
http://brane-space.blogspot.com/2015/05/methane-release-increases-because-of.html
Into this critical situation (right wing)  Manhattan Institute (and ALEC)  member Oren Cass interjects himself as ostensibly offering a sane and rational viewpoint. In fact, in light of the most recent research on  terrestrial climate thresholds, specifically the existence of a "weathering thermostat" Cass' objections can't be taken seriously - well, except for one, which I will get to.  In terms of the aforementioned thermostat,  “There must be some mechanism that prevents the climate from going completely crazy,” according to Philip Pogge von Strandmann, a geochemist at University College London and lead author of the study.

Indeed, the referenced paper shows for the first time there exists actual empirical support  for a "natural thermostat" that keeps the Earth habitable. The problem is the discovery of said thermostat offers no hope for an escape from humanity's current climate predicament.  While the geological weathering thermostat - affecting rocks like granite - warms and cools the planet on a scale of hundreds of thousands of years, this is far too slow to help moderate the meteoric rise in atmospheric CO2 generated by human activity. The latter, again, is responsible for the mean global temperature being out of balance  by   0.6 W/ m2.    or   a radiative heating effect equivalent to     2.5 x 10 7  TJ injected each year into the atmosphere,  roughly 400,000 Hiroshima size A-bombs.

This must be borne in mind when considering Oren Cass' claim, which amounts to yet more cherry-picking to attempt tp paint climate models as unstable, untrustworthy  or outright irrational. But what can one expect from a tool whose' aim is to prop up the likes of global warming arsonist Scott Pruitt at the EPA?  Having said that, Cass is correct regarding his initial point (ibid.)   This is where he cites a 2015 Nature paper, e.g.

The findings indicate climate change will widen global inequality, perhaps dramatically, because warming is good for cold countries, which tend to be richer, and more harmful for hot countries, which tend to be poorer. In the researchers’ benchmark estimate, climate change will reduce average income in the poorest 40 percent of countries by 75 percent in 2100, while the richest 20 percent may experience slight gains.

Cass ridicules this analysis as "silly",  which is correct. Not all climate change papers, especially when they veer into economic projections, are sound. By 2100 with our  planet approaching a mean global temperature increase of 4- 6 C,  we will be on the cusp of the runaway greenhouse effect and there will be no "special islands"  of economic growth.  The projected map is shown below: 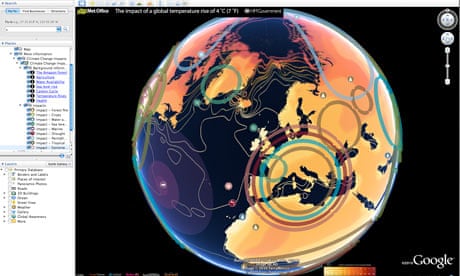 The analysis - such as it is - takes no account of Rayleigh scattering in concert with standard gray atmosphere radiative transport models, e.g.  applicable to the terrestrial atmosphere. The equation of transfer that applies is:

Where k is a mass scattering coefficient, r  is the molecular density (e.g. in cloud cover) and J is the vector source function for a specific intensity I. If the correct Stokes parameters (I, Q, U, V) which describe degree of polarization are included, and the appropriate incidence angle of radiation, we can expect the propagation of radiant energy from the S. hemisphere to the north very effectively.  The planet will hence come to a uniform warming that impacts all economies as well as economies of scale.   My point is that Cass' citing of this loopy paper doesn't prove doomsday scenarios of warming are daft or not applicable.

His next gambit is to cite an EPA study that "assumes that a day counting as unusually hot for some city in 2000 will cause a similar mortality increase in that city in 2100 even if climate change makes it no longer unusual."  Adding:

"The result is a projection that a hot day will kill massive numbers in Northern cities by 2100 - though such temperatures are already routine at lower latitudes with no such ill effects."

Huh? Is he living on the same planet?  Is he forgetting the deadly Indian heat wave that killed hundreds in 2002? See e.g.

"India baked today in a heat wave so intense that mud huts became as hot as ovens and birds in trees dropped dead, villagers said. Temperatures 7 percent above the already hot normal have killed more than 600 people nationwide this month."

By 2100, given a 4-6 C increase in mean global temperatures an Indian heat wave will likely see daily 135- 150 F temperatures and especially failing to cool below 110-120 F at night, which will lead to the most deaths, as is par for nearly all such events. It is not inconceivable a death toll in the same region could tally over 10,000 - possibly as high as 20,000.

Cass next looks at a "second study" from the American Climate Prospectus, contradicting a "first study"  (covering 1968-2002) during which hot days, e.g. over 90F caused higher mortality. This second study "found mortality rates on hot days declined precipitously" and because of the adoption of air conditioning,  "The United Sates is well adapted to the high temperature-related mortality impacts of climate change".

Two critical aspects overlooked by this happy babble are:

-  Collapse of power grids and energy infrastructure, i.e. from being unable to meet demand in a climate where 130- 140 F is hit in most cities around the world daily. - Associated collapse of utility electrical pumping stations, i.e. to provide enough water for a much larger population. (because electric power is needed to pump water for use)

In combination, these factors will engender massive deaths from disease, especially if potable water isn't available.  Absence of safe water sources, especially, dramatically enhances the chance of getting water-borne diseases including (in the runaway greenhouse cusp world) amoebic dysentery and cholera.  Absence of electrical power further increases risk of diseases spreading especially given lack of refrigeration  in heat wave conditions (see also the link at the end of this post).

This leads to Cass' next error which is to hype the human ability for adaptation "which is not an esoteric detail for science and economics".   He argues that "if you imagine that society is static and incapable of innovation then prospect of climate change must be terrifying."

Well true, but that doesn't mean useful  innovation and adaptation are inevitable. For example, I already dealt with a number of impractical "innovations" i.e. from the authors of 'Super Freakonomics', here:

Less commonly addressed in the media is the inevitable spread of tropical diseases including cholera, dengue fever and worm parasite infestations, e.g.

Thus, millions more tapeworm cyst infections of human brains in affected areas  can be expected- perhaps four fifths of the population of Earth by 2100. Yes, adaptation is possible but requires enormous supplies of anti-worm serums, meds such as Ketrax. I recall here my own worm infestation while in Peace Corps - noticed only after being awakened one night by intense itching and a twitching sensation on the inner thighs. I switched the night light on and spotted wriggling movements in discrete locations on the skin, I realized the worms would spread if I didn't act. The cure? Ketrax, prescribed by the spoonful (by a dermatologist) three times a day. After a few bouts of vomiting out the vermin  (visible wriggling in the vomit), all had been eliminated. I don't know that people will even be properly diagnosed as multiple worm infestations spread on approaching the cusp of the runaway greenhouse.

Finally, Oren delivers a lot of happy talk at the end, writing:

"The 1970s fear of impending limits to growth made sense, assuming that society could not expand a finite supply of resources."

But see, that's precisely it. Earth does have a finite supply of resources which by definition means that can't be "expanded", i.e. beyond that finite allotment.  To fix ideas,  we're rapidly approaching the threshold at which there will simply be too many people to feed given existing resources- water, arable soil, fertilizers etc.. The projections now are for at least 10 billion people by 2050, and an 80 percent probability of 12.3 billion on Earth by 2100. Simply put, there simply aren't the resources to support even the lower addition. At root, the issue is sustainability - especially for water which is needed for crops. NO water, no crops to feed a growing population. The graphic below puts this into perspective;

The interpretation of the graph (upward) is simple. By June, 2030 TWO full Earths - that is the resources therein - will be needed to support the then population. Already we are at 1.5 Earths. Every year Global Footprint Network raises awareness about global ecological overshoot with its Earth Overshoot Day campaign. Earth Overshoot Day is the day on the calendar when humanity has used up the resources that it takes the planet the full year to regenerate. Just like the hands of the  'doomsday clock'  approaching 'midnight' for nuclear cataclysm

The continually increasing population is also exacerbating the problem of finding and implementing adequate (aggressive consumption) fuel -energy sources . Global energy consumption rose from barely 21 EJ in 1900, to 318 EJ in 1988, to close to 400 EJ today. Solar, geothermal + wind by the end of this year, will therefore have contributed only:

But this is exactly the rate of increase in global population per year! In other words, the added total alternative energy benefit is exactly lost because we added an extra percentage of humans to consume the benefit!  This is why the economists proposing increased global population to enhance GDP are shooting themselves in the foot.

The stage is set to add 50% MORE humans by 2050, topping off at 10 billion, which will necessitate - if we still plan to retain solar in the mix - converting an area the size of Europe to solar panel arrays. In addition, to feed all those hungry mouths, we will need to add an agricultural area the size of the whole continent of South America - especially given how the eating habits of Chinese and Indians have now altered to become more "American" .


Whether Oren Cass wants to admit it or not, we are constrained by limits to growth - perhaps not as much now at 7.5 billion humans, but definitely by the time we add another 2.5 b and need an additional Earth to support them.

See also this  article on why heat waves are so deadly:

Posted by Copernicus at 8:05 AM