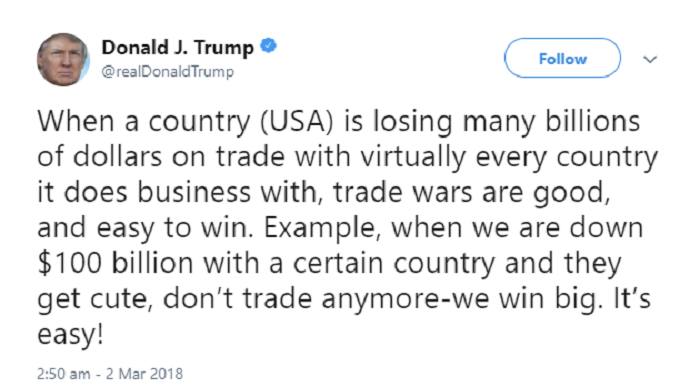 Recall that during Trump's bombastic  and tempestuous 2016 campaign he frequently singled out China for attack, saying the trade relationship was “the greatest theft in the history of the world” and comparing it to “rape”. He also pledged to protect the U.S. steel industry and his action yesterday was the first major step in fulfilling those promises. Let us again agree this man is a benighted halfwit and loon who doesn't know what he is doing from day to day and has no mind - or brain  of  his own. (Look at his latest 180 with the gun control issue.)

In his reckless tweet earlier this morning, the traitor - who had not one word to say about Putin's new claims of a long range "Mach 10" nuclear rocket - chirped that a trade war is "good". See his tweet at the top. This is the mentally deranged nitwit and traitor puppet we have sitting in the seat of power. And it's easy for him to say that with his typical bravado when he has the money to cover the stock market losses that will possibly take place again today.

Yes, you read that correctly! According to The Financial Times, the U.S. Equity Futures point to further losses today.  Perhaps in the 400 plus point drop  realm we saw in the DOW yesterday. Incredibly Donnie Dotard  doesn't even know that China is not the biggest steel supplier to the U.S. That honor goes to our neighbor, Canada.  Canada has the largest share of steel imports to the U.S. at 16%, according to data from the Department of Commerce. That is followed by Brazil and South Korea, with steel imports from China down 5% in the most recent period.

More disturbing, according to the FT, the EU will now consider imposing its own "safeguard" tariffs. on imports of steel and aluminum "in response to the U.S. to level national  security  tariffs on imports  on the metals from around the world."  This warning came from the EU's top trade official, Cecilia Malmstrom.  She also warned of a "serious domino effect"  from this.  Not an exaggeration because it affects every nation that needs steel, or uses it (and aluminum) in manufacture.

Let's backtrack now and consider what is meant by a "national security tariff on imports."   This arises because the only way a president can raise tariffs by way of executive order is by citing a national security need to do so. This has been in the wake of the past thirty years' impetus toward globalization and numerous rulings by the World Trade Organization (WTO).  Otherwise, congress has complete jurisdiction over tariffs. Indeed, congress could still pass legislation that blocks Dotard's reckless action, if he actually does formalize his yap using an E.O.

Why did the DOW drop 420 points yesterday? What does this have to do with Trump's flapping gums announcing off the cuff a 25 percent tariff on steel and 10 percent on aluminum ?  Well, because Wall Street knows that tariffs are actually taxes and the Street has an aversion to these in whatever guise. These taxes are not actually paid by the foreign nations to which the tariffs are directed, but by American consumers - e.g. by increasing the cost of imported goods.  Because other nations will respond with their own tariffs, like the EU, it means the cost of American goods will also be increased. If then American goods see a drop in purchase overseas, there is the risk of American job losses.

What about Trump's actual target,  China? According to   Li Xinchuang -   vice secretary-general of the China Iron and Steel Association:

“The impact on China is not big.  Nothing can be done about Trump. We are already numb to him.."

According to Louis Kuijs, head of Asia economics at the Oxford Economics consultancy in Hong Kong,:

"If you really want to hurt China’s exports to the US you need to look at electronics and telecommunications items. It’s much harder to find agreement on that because many US companies would face collateral damage and it would raise prices for US consumers.”

Kuijs said the steel and aluminum tariffs were designed to score political points, and many of Trump’s advisers were veterans of heavy industry.  He added:


“U.S. officials are looking at issues surrounding intellectual property and forced transfers [in China], but they haven’t figured out a way to weaponize it and inflict pain on China without hurting US companies,”


In the meantime, look for the most incompetent administration in U.S. history to continue stumbling on numerous policy fronts, from immigration, to trade and revising gun laws. This is what you get when you have a deranged traitor in power who doesn't know his ass from a hole in the ground - but does have a huge boner for Putin and Russia.

Posted by Copernicus at 9:04 AM