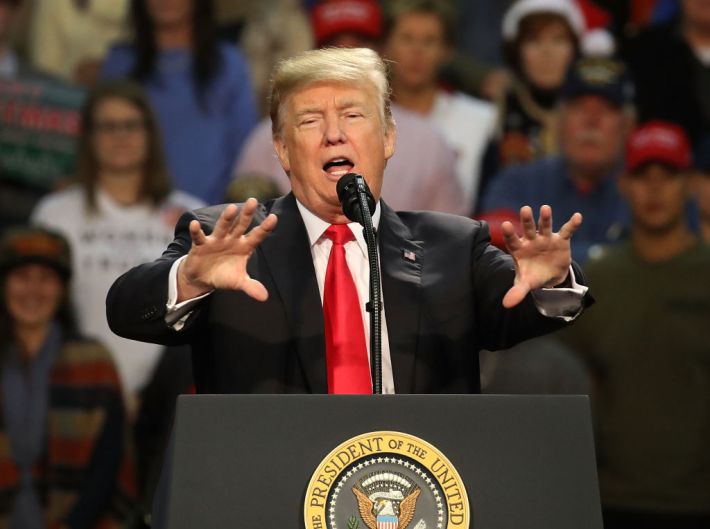 Trump at a recent rally in Pensacola bloviating about 401ks. Most of his base don't have one..

A question that comes to mind after a recent Dotard spiel about 401(k)s is whether he really knows his base, his indefatigable deplorables who appear prepared to suffer any insult on behalf of their little dolt messiah. For reference, a recent New Republic article ('It's the Culture, Stupid!', November, p. 14) provided this insight on his prime supporter:

"In last year's election, according to an analysis by political scientist Tim Wood, 61 percent of the poorest whites - those in the bottom third of income distribution - voted for Trump."

Sixty one percent of the poorest whites. That is, a demographic that likely would no more have a 401 (k) than they'd be able to afford an immediate annuity.  But it seems Trump,  aka Donnie Dotard, has no clue about their financial capacities, or he doesn't care. (After all, he did offer the disclaimer remark after being elected "You all knew I was a snake and you still put me in office!"   Well, not everyone, asshole .)

As observed in a recent  Bloomberg report:  Trump has been trying out a new "campaign" slogan: “How’s your 401(k) doing?” The answer for more than half of Americans is that they don’t have one.  Having one means you are earning enough in a salary to salt money away in such a plan, i.e. you have disposable income. The problem is that most people in the bottom third of income don't have such disposable income. These are exactly the poor white Trumpies.

Alicia Munnell, director of the Center for Retirement Research at Boston College, commented in response:

"I’m not sure he understands that only a fraction of the population has 401(k)s, or he just may not realize that he’s speaking to the privileged few.”

Personally, I suspect he knows he's speaking to the privileged few and his supporters are either too dumb or brainwashed to give a shit.

The fact is only a third of workers contribute anything to their retirement accounts, according to a Census study released this year. Among workers in the bottom half of the income scale, less than 25 percent participate in a retirement program, according to the GAO.. With wages largely stagnant for most Americans in recent years, saving for retirement has been crowded out by other expenses. Student debt and auto loans are at record levels, according to Federal Reserve data released in February, and overall consumer debt is rising at the fastest pace in three years.

According to Douglas Holtz-Eakin, president of the American Action Forum, and former chief economist to the Council of Economic Advisers under George W. Bush:

“You can give people all the tax-deferred accounts you want, but if they don’t have enough money it’s not going to work,”

Despite that, Dotard has repeatedly tested out the line at a fundraiser, a campaign rally and in a White House meeting, predicting that the rising U.S. stock market will help him win re-election. But for his supporters to make that same error again, and I do believe when their healthcare is pared back from his tax cuts they will see it's an error, they'd need to have 401(k)s and be getting benefits from them. They don't and aren't.

The truth? Only about 45 percent of private-sector workers participate in any employer-sponsored retirement plan, and the lower-income workers in Trump’s political base are the least likely to hold money in such an account, according to the Government Accountability Office. Again, this isn't startling given their wages - assuming they have any - are likely so low they can barely afford their rents and utilities, far less groceries. So there's nothing left at the end of any given week to put into a retirement fund.

Donnie Dotard - in another disconnect  - also  mentions the stock market almost daily in tweets or public remarks. He intends to take direct credit for record highs by the Dow Jones Industrial Average and other indexes. He seems not to appreciate that had Obama not pushed for a $797 b stimulus package back in 2009 - passed by Dems - we'd likely still be in a great Depression.  All the financial indices and data that followed the great market meltdown in 2008 showed that without a stimulus - after the credit freeze - the recession would have morphed into depression. By now we'd likely still be in it, with 30 million or more unemployed.

Trump in his elitist, privileged mind, seems not to grasp that only about 14 percent of U.S. families directly own stocks, an asset class dominated by the country’s top earners, according to the Federal Reserve.  (This direct ownership definition directly contradicts Jill Schlesinger's claim on CBS nine days ago that 45 percent directly own stocks. But she was including those who have mutual funds in their 401ks, which is not direct ownership.)

Meanwhile, as Bloomberg reports, Dotard has  rolled back efforts to expand retirement savings options to more middle-class and low-income workers. This involves neutering the fiduciary rule.

For a dolt propelled into office by a sense of grievance - from poor whites who feel left behind economically - Dotard's continual references to the stock market and 401(k)s risk alienation.  This according to Austan Goolsbee, a former chairman of the White House Council of Economic Advisers under President Barack Obama.  Goolsbee,  in the aforementioned Bloomberg piece,  puts it thus:

“As a political slogan, ‘how is your 401(k) doing?’ suggests he’s most interested in the one-third of people who have a 401(k). The more you highlight how great that group of financial winners is doing, you at least run the risk of angering and irritating the very people who revolted against what they perceived as the financial and political elites in the first place.”


White House spokeswoman Lindsay Walters said Trump’s statements reflect “a strong economy” that is “good news for everyone.”  She added to this initial BS by claiming- in an email statement:

“For the Americans that don’t have the opportunity to invest in a 401(k) plan or who choose not to, the Trump agenda of lower taxes, higher wages, and better jobs allows them to save more on their own, and potentially have a better chance of finding a job in the future that provides those benefits,”


Of course this is codswallop that only the most gullible, uncritical thinker would swallow. No set of financial data supports it, period. The agenda of trickle down via lower taxes on the richest, indeed, has always been shown to curtail economic growth and jobs as well. A Financial Times analysis of the Bush tax cuts appearing in the FT issue of 9/15/10 showed precisely this.  Other analyses from the Reagan tax cuts in the 80s showed similar slow growth, coupled with exploding deficits. ( Deficits, by the way, which were later invoked to cut social services and even Social Security (by raising the retirement age.)

It also appears that at least some of Dotard's supporters may be wise to his con. An October Politico/Morning Consult poll found that only a third of voters think Trump “cares about people like me.” Trump’s tax overhaul is opposed by a two-to-one margin because independent analyses have found it largely benefits the wealthy, according to a Quinnipiac University poll released Dec. 13.

Trump also appears not to be aware that the 401(k) was never intended as an investment vehicle but rather as a saving vehicle. This was pointed out by William Wolman and Anne Colamosca, the authors of The Great 401k Hoax.   This saving dynamic was further reinforced and assisted by companies matching the savings of employees.   It was only after this matching diminished that risky investment strategies were emphasized for the 401(k).  But these stock-mutual fund investments were never originally envisaged for ordinary small fry investors with  little disposable income they could afford to lose. (As the stock crash showed in 2008).

Another huge theme of the authors is that labor is devalued precisely because we live in a "Judas Economy" where capital is revered over it.  Look at the abnormal degree to which companies opt for stock buybacks to inflate their stock P/E ratios rather than create enough new jobs.

One of the most disgusting indices as the authors note, is that productivity in relation to GDP has increased more than 40% in the interval since 1973 even as wages-salaries have remained almost stagnant. Of course, one major reason is how "greater productivity" is attained. Often by firing a number of workers and ditching their benefits, and making the remaining force do their work plus that of the downsized one.

The authors' primary advice for little guy would-be investors is to steer clear of the markets until and unless the balance between Maul Street and Main Street is restored. Mainly, that much higher wages emerge which specifically allow more disposable income  to invest so one can afford a measure of loss if such occurs. Otherwise, steer clear and go conservative - saving with a view to ultimately getting an immediate annuity to provide supplemental income as one ages.  A stock crash, meanwhile -  namely in the current bubble - will set millions of 401(k) ordinary investors back years, maybe decades. Hell, they may never get to retire.

Something someone ought to make clear to Trump's followers who praised his stock market and 401(k) speeches for making them believe one day they can strike it rich too. Yep, and pigs fly and I have a beach front acre on Barbados east coast to sell for a Bajan buck. (That's U.S. 50 cents).

Posted by Copernicus at 9:47 AM