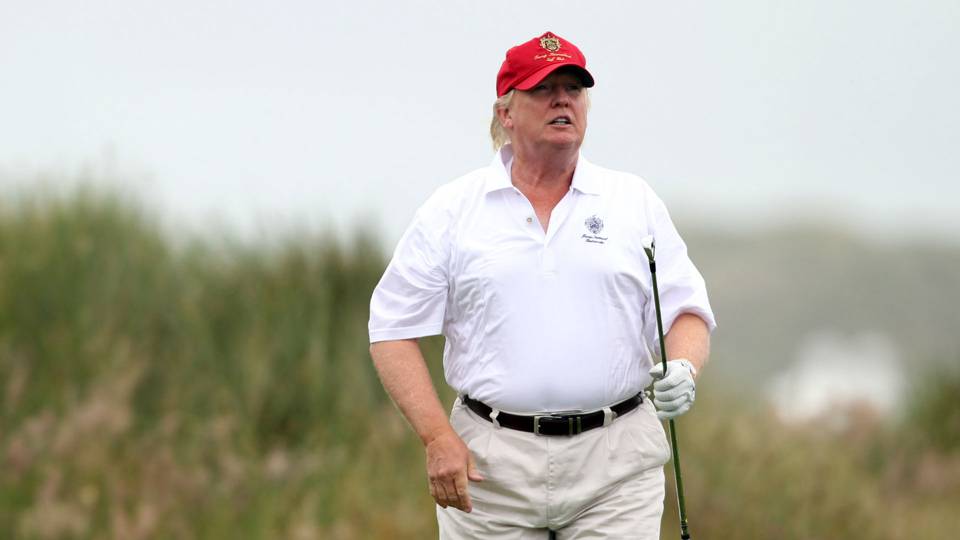 "Hey, I'd rather loaf in Florida than stay in the White House and work! Whaddya think I am, a real President?"

The verdict is pretty well in after Donnie Dotard's first 11 months in office, and the general consensus is that we have a no good bum, twitter troll and poseur on our hands - occupying the oval office. As noted on NBC  News 2 nights ago, this lazy maggot has been goofing off on his various properties (Mar-A-Lago, Bedminster,  etc.) for 109 days or nearly a third of the time he's been in office This is the same obnoxious turkey who promised during his campaign he'd "never take a day off," bragging, unlike his predecessor, that he "loves to work".

I don't think so. Unlike Obama, who took fewer than one fifth the days off that Trump has up to now,  the unadulterated fact is that Donald Dotard hates to work. He watches cable TV for up to 8 hours a day, and when he isn't tweeting bunkum he's on the crapper reading comics (and The National Enquirer) -out of sight. When he's not doing any of those things he's bumming at his various properties, especially Mar-A-Lago, but always claiming he's on a "working vacation".

Working vacation my ass. He no more knows what that means than he knows the role of differential calculus in computing planetary orbital elements. The New York Times reports that by his fourth month in office, Trump had already spent more time on the links than his three predecessors combined.

"In 2016, Americans who work full time accrued an average of 22.6 paid vacation days, though only used 16.8, according to the Bureau of Labor Statistics. The second figure represents a half-day increase over 2015. During Trump's 11-plus months in office, he has already spent over 100 days on golf resorts, including more than one month each at his properties in New Jersey and Florida, per the Wall Street Journal."

As I noted, it's already 109 days  bumming on the job and counting.  That is how lazy this ambulatory turd is, and it boggles the mind his delusional followers haven't wised up yet on how he's also screwing them. (The tax money Trump has spent on golf carts alone could have bought 54,095 school lunches.)

Lest we forget, five days into his presidency he  even bawled that the job had  turned out to be too much for him to deal with. Too many details, too much stuff to master for an extensive government bureaucracy.  Hence, his penchant for becoming a cable TV addict and twitter troll. See e.g.

But hey, if the job is too much maybe he ought to resign. It beats wasting time tweeting and watching TV for a combined nine hours a day - when he isn't in Palm Beach hosting his rich country club boys with lavish dinners or playing golf with them. On the taxpayer's dime.

This bum and his parasite family are also running up security costs, helping to bleed out taxpayers. As of March 18, The Denver Post (page 9A) reported

The U.S. Secret Service requested $60 million in additional funding for the next year, offering the most precise estimate yet for the escalating costs for travel and protection resulting from the unusually complicated lifestyle of the Trump family.  Nearly half of the additional money ($26.8m) would be used to protect Trump's family in Trump Tower, while $33 million would be used for Trump's regular travel costs, especially to Mar-a-Lago.

Current (most recent) estimates are that these figures will be exceeded five fold.  By all that's just and fair, this con man bum and his family ought to be paying for their own security instead of bleeding taxpayers dry.

In addition, each time this bum goes to his Palm Beach hacienda he disrupts the lives and businesses of everyone there. The local costs that add up include: for local police deputies guarding the estate, the U.S. Coast Guard having to be deployed in surrounding waters and Air Force One - costing $180,000 per hour to operate. Oh, and extra cops on duty in case of any demonstrations.

That's not all, not by a long shot. Back in March, The Palm Beach Post reported Trump's golfing excursions were threatening to put the Lantana Airport in Palm Beach County out of business because it has to close every weekend the lazy bum.....errrr "president",  is in town.  At least one business owner estimated the  Airport was losing over $35,000 each weekend the  loafer-in-chief and his entourage came in, as opposed to staying at the White House.

"Common Dreams notes that not only do the president's excursions raise questions about his level of interest in governing, they also likely constitute an ethics violation, as each trip benefits his properties financially. Prior to assuming office, the president handed control of the Trump Foundation to his sons, Eric and Donald Jr., but refused to divest from his business interests, which include the Trump National Golf Club in Bedminster and Mar-a-Lago; the president calls the latter his "winter White House."

Let's also acknowledge the guy is a pathological liar and swindler.  Naomi Klein in her book, No Is Not Enough, reports (p. 140) how Dotard related to his Fox n' Friends sycophants how he swindled a land renter some years ago.  In his own words:

"I rented him a piece of land. He paid more for one night than the land was worth for a whole year. And then I didn't let him use the land. I don't want to use the word screwed, but I screwed him. That's what we should be doing."

Bingo!  And this swindler has also screwed his own delirious, gullible groupies, feeding them the malarkey they will get some good money in his just passed tax cuts, so much that  he will suffer like the other rich assholes. Then turning around and bragging to his rich parasite pals how THEY will be the ones to reap the rewards and get richer! See e.g.

President Trump was in a celebratory mood on Friday night and told a group of his wealthy friends, “You all just got a lot richer” after he signed the tax cuts into law. Trump reportedly uttered the words to a group of friends who were having dinner nearby at Mar-a-Lago, including two friends who spoke to CBS News


In other words, a goddamned liar. But what's new? He's been lying his ass off all year, from accusing Obama of wiretapping to lying about his inauguration crowd, and about James Comey.  Even recently lying that he's "signed more bills into law than any modern president since Harry Truman". Hell, his daft groupies even lie for him having the gall to compare him to JFK. For those who might somehow think he signed as many bills this past year as JFK here's a reality check: Up to now Dotard has signed 92 bills but that is still HUNDREDS fewer than JFK signed (700) up to the same point in his presidency.

Even Bill Clinton signed 209 bills in the same amount of time, and Gee Dumbya Bush signed 242, according to a bill tracking website.  In other words this lazy putz really does spend more time lollygagging on his twitter feed or watching TV than anyone else in modern history, As I said, he's a lazy bum and liar.

Perhaps if Donnie Dotard feels he no longer belongs in "the People's House" and the job is too much for his senile brain, he ought to resign. Leave it.  Again, let's remind ourselves this is the same turd who claimed Obama was "wasting tax  money"  and "taking more time off than any other human" barely three years ago.

Before leaving let's also recognize that even beyond Dotard's laziness, lies and swindles is the danger he poses to this Republic. He is, as the contributors to the recent book 'The Dangerous Case of Donald Trump' note, a disruptive personality and a peril to our collective security each day he remains in office.  Few of Trump's followers may believe the psychologists and therps who contributed to Bandy X. Lee's  above cited book, but maybe they will believe Tony Schwarz,  the ghost writer who helped him do 'The Art of the Deal'.   In his words (p. 73, ibid.):

"His amygdala is repeatedly triggered...and his prefrontal cortex - the part of the brain that makes us capable of rationality and reflection - shuts down. He reacts rather than reflects - and damn the consequences.  This is what makes his access to the nuclear codes so dangerous and frightening."

And why we in the sane segment of the populace need to keep an even sharper eye on this degenerate, in the coming year. He's a true cancer on the office of the presidency - until he can be extracted, removed.

For his lies alone, breaking even the record of Richard Milhous Nixon, Donnie Dotard merits an F minus as a grade for 2017.  And that's being generous!

"Trump launched his real estate career by extracting exorbitant sums of money from the state; the New York Times estimates that his deal for the Hyatt Regency alone has cost New York City as much as $350 million since the mid-'70s. Only the scale of his con has changed over the ensuing decades."
Posted by Copernicus at 8:45 AM