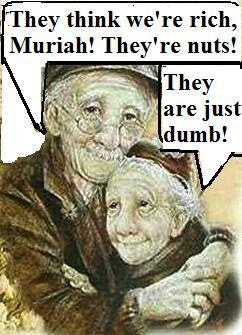 We've already beheld how the Repukes have lied through their teeth to try and get a shell of a health care bill passed (Graham-Cassidy) that actually would strip benefits down to the bare bones - even for those lucky enough to have anything. Now, the Goops are trying to peddle the nonsense that everything is just fine and dandy on the income scene - especially for retirement incomes.

First, let's deal with the retirement income scene which Andrew G. Biggs ('Memo To Trump: There Is No Looming Retirement Crisis', WSJ, Aug. 15) claims has now soared. He writes:

"The data show that in 2008 retiring households typically had incomes equal to 95 percent of their incomes just prior to retirement. The figures didn't differ significantly when households were broken down by education level or marital status. This helps explain why three quarters of retirees surveyed by Gallup last year said they had enough money to live comfortably."

Well, maybe because there IS one. In this regard one wonders what planet Biggs is living on. It appears not to be planet Earth. Maybe it's part of a parallel universe where financial fantasies hold. Accoding to The Hill in a special report:

Of those with savings, only 47 percent of Boomers and 27 percent of Gen X-ers have saved $150,000 or more. With only 25 percent expecting income from an employer-provided pension in addition to Social Security, these are very low levels of savings."

Personal finance specialist Jill Schlesinger supports the preceding take in her May 15, 'MoneyWatch' segment as part of CBS News:

Older employees are better off, but not by much. Workers over age 55 have about $130,000 saved on average, and, for those over 55 who have been active in a plan for 10 years, that average jumps to approximately $230,000. That's certainly an advantage for plan participants, but even this group may not accumulate what is necessary to maintain their living standards.

The reason for the trend is obvious: The recession and market crash inflicted pain on retirement accounts, lopping off about a third of their total value. Additionally, as many families sustained job losses and lower incomes, they were forced to withdraw retirement funds or reduce contribution levels"


This comports with other data that have been available for years, including especially the stagnation of wages and the reason so many Americans are forced to live on Social Security alone. Thus, from one government economic site we learn:

It appears then that something is rotten in Biggs account, maybe cherry picking data OR not telling the whole truth.  But, of course, for a would be "entitlements cutter" it serves his propaganda purpose. Thus he can use  his baloney to argue that since retirees are "so much better off " then Social Security can be cut.  Hence his message to Trump:

But this is ignorant folly and worse, criminal, if two thirds of Americans have Social Security making up 50 percent or more of their income.   Consider an oldster living on $2,500 a month retirement income, of which half ($1,250) is from Social Security. His rent is $900 a month and utilities comes to $150 a month. Groceries amount to $400 a month, and that's assuming he's on a very abstemious kind of diet. Add in $104 a month for his Medicare premium, $ 140 a month for his Medicare Supplement insurance plan, along with $250 (conservative!) for his Plan D drug plan and you have: a total of $1,944 accounted for.

That leaves about $556 disposable income and if his Social Security is cut by 10 percent, what then? Well, that leaves him with $431 - not much in case the rent goes up, or his Medicare supplement plan premium or his electric bill!

It is clear from this that Biggs is peddling codswallop to try to prompt Trump to break his word not to go after Social Security.  Of course, given Dotard has already broken so many of his promises- including getting Mexico to fund a border wall, bringing jobs back to the USA, and getting a health bill that will be "the best you ever saw", one can legitimately wonder how long before he breaks this one all on his own.  Especially now that he's again on the warpath on learning his Secretary of State called him a "moron" and didn't retract it.

Stay tuned!
Posted by Copernicus at 3:49 AM