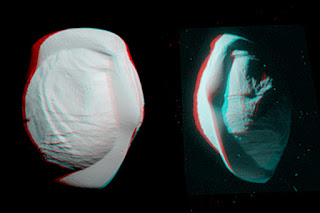 Two images of Pan taken by the Cassini spacecraft. At left is a polar view, i.e. taken from above one of its poles, at right is a lateral view with the bulging equator at an angle. The resolution of the (raw) images is 150m and the moon itself has a diameter of 35 km.

Who would have believed that the Cassini spacecraft, after entering a "ring grazing" orbit, would encounter one of the most peculiar moons in the solar system. While some have compared it to a flying saucer, other planetary astronomers have taken the more prosaic view of ravioli.  Whichever it is, even already awed specialists have to admit the sights of little Pan are mind bending.

It is precisely the close orbit of Cassini that has allowed it to get close up views of moon like Pan, orbiting Saturn at a distance of 134,000 kilometers. The new images, as shown in the accompanying examples, feature a resolution as fine as 150 meters, about the size of a football field and another half of field.

How did the peculiar shape come to be? According to Carolyn Porco - leader of the science imaging team for Cassini, it appears that as the moon coalesced from the debris of the early solar system, material from Saturn's rings fell onto the moon's equator and built up its disk like silhouette.   Porco bases this hypothesis on computer models using calculations of the likely dynamics for the material.

Thereby, over millions of years, Pan blazed a trail through Saturn's A  ring -clearing what is now referred to as the Encke Gap.  To be sure, the influx and accretion of material onto Pan's equator has decreased but plausibly continues to a lesser degree.  According to Porco, this is why the bulging belt looks smoother than the rest of the moon.

In an interview with Eos: Earth & Space Science News (may, p. 7) she added:

"Aside from just the sheer joy of seeing something so alien at such a level of detail  images like these will have an extension beyond the solar system."

In other words, studying the ravioli-like Pan will be especially helpful when planetary astronomers consider the processes and dynamics by which material accretes on a body with very low gravity.