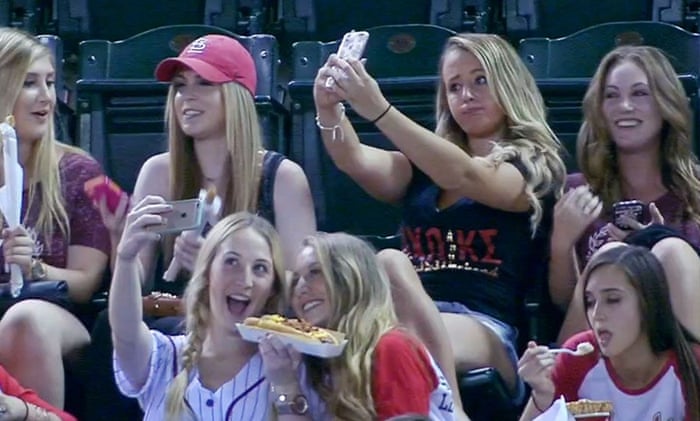 Okay, enough is enough! We need the selfie craze to come to a halt as it's now getting ridiculous. The scene shown this morning (on CBS Early Show) of the Tour-de-France and one rider smacking the smart phone from a selfie -taker said it all. The ignoramus was apparently sticking his neck literally way out into the stream of bike riders to try to snap his mug with the racers in rear view. He couldn't fathom he was creating an obstruction, so having the stupid phone slapped from his hand was a wake up call.

Apart from the fact NO males ought to be doing selfies, one wonders how this insane craze got started and why it is sustained.   Well, it turns out Joel Stein has the answer to  how this odious, self-absorbed obsession began ('Selfie Madness', Playboy, July/Aug. p. 38) as he notes:

"These were originally the bailiwick of club girls on MySpace: shot in the bathroom mirror, cleavage showing, head tilted, hand on hair, duck lips out."

He also observes, accurately I believe, that men have no business at all taking selfies. He writes:

"Men are even taking selfies in front of other people, unaware of the shame they should feel. A woman taking a selfie in public is inherently hot. She's telling the whole bar to look at her, signaling her confidence....after centuries of posing for male artists the girls can at last objectify themselves.

For a man, though, I am absolutely convinced taking a selfie is a demonstration of insecurity. We have the luxury of not having to be constantly evaluated on our looks, it's pathetic to care too much."

Indeed, it is. While a woman can be excused, especially if fairly attractive, in imposing herself in assorted real world scenes, males are a blight and an unwelcome intrusion - say like a skunk or rabid rat  suddenly appearing at a picnic. Outside observers don't appreciate it, and neither do those (like the bike racers in England) on whom this foolishness is spontaneously imposed - though truth be told, the females ought to have been keeping low profiles too (in the case of the bike race). So it is safe to say the selfie craze has metastasized to the point of a visual cancer in much of the culture.

Even Obama fell into the selfie trap at Nelson Mandela's funeral, something JFK never would have done in a million years. JFK had a sense of decorum and even if offered this smart phone device, would have likely used it only for basic communications or the odd web surfing - or taking photos of his kids- never of himself.  JFK projected power, and he was confident enough not to have to have a record of himself in every situation. (Of course, the media DID want to photograph him in almost every situation, so much so that JFK often had to go to extremes to reclaim his privacy!)

The "selfie" then embodies all the gratuitous self-infatuation that is poisoning this country - causing it to mutate into a bunch of navel-gazing zomboids with faces pushed into assorted small screens - whether of smart phones or iphones- and intruding into the visual world.  Let us also recall what Krimhilde, my sister-in-law and Eck spiritualist,  said about selfies:

"These are the creations and obsessions of the immature human, which remains steeped in narcissism, in self-absorption. No truly advanced or advancing human on the path to a higher spirituality takes a selfie. Our true motivation and mission in this life is instead to embrace selflessness. That means placing one's body in proper relation to one's spirit."

Indeed, and one of the ways we've seen the extreme manifestation of the selfie craze is in "after sex" selfies, which no one has any business doing for all the reasons I posted in a previous blog post:

Can we get people to rein in the selfies?  Not too likely until such time that they mature sufficiently to not have to interject themselves into the world every five seconds.

Stein noted that according to a poll in the British newspaper The Telegraph, selfies are "the most popular type of photograph". Which is sad, and shows the extent of solipsistic navel gazing to which we've descended. "I- phones", "Ipads"....the whole tech lingo bespeaks I, I, I. The selfie or "I-photo", simply extends this ego gratification one more dimension.

No wonder today so few have eyes turned toward the larger universe, and outer space. We're all so enmeshed in the "I" we are unable to externalize the EYES to realms beyond ourselves.

Posted by Copernicus at 9:18 AM