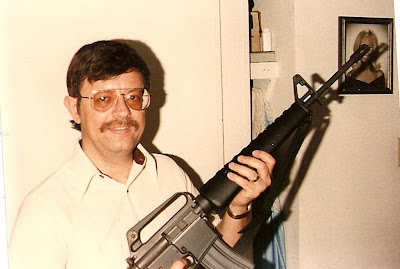 In Murdock, FL, ca. May, 1986, admiring one of my middle brother's favorite rifles in his collection. No, I am not a "gun-hater" only a hater of stupid laws!


The verdict is now in with the Trayvon Martin case and millions are outraged as they should be. The problem is to be able to pin the tail on the right 'donkey', and that means exactly and precisely identifying how a 'not guilty' in this criminal case came to be.  Reasonable people can disagree on particulars, such as influence of "reasonable doubt" and how the prosecution "blew it" but in the end there lurks the 4,000 lb. 'elephant' in the room: Florida's misbegotten 'Stand Your Ground' law.

According to an April 9, 2012 TIME article ('The Law Heard Around the World') the threshold for proof of felony homicide is so low with this law on the books, it's almost impossible to prosecute anyone for capital murder. Which, of course, is why the Special Prosecutor at the time opted not to pursue a capital murder charge in the Zimmerman case and backed away from a Grand Jury.

Even more perverse, as the TIME piece observed, is that  in Florida you're invariably better off firing your gun once it's drawn. According to the article:

"Even though 'Stand Your Ground' excuses with the barest of evidence, Florida punishes the crime of simply pointing a gun at someone with a mandatory minimum of three years in prison. In other words, you can point a gun and go to prison, or you can fire your gun and go free under 'Stand Your Ground'."

According to one of Zimmerman's former law profs (and contrary to Zimmerman's earlier claims) he knew this law, so you expect him to know he'd be tagged with at least 3 years at Raiford if he merely drew his gun on Trayvon and didn't fire. In other words, it's plausible that  a knowledge of 'Stand Your Ground' made him realize he'd have a better chance getting off Scot-free using his weapon than if he'd merely pointed his weapon at the youngster and not fired. As the article put it:

Indeed. And once he'd drawn in haste, Zimmerman would have realized he'd have to fire if he had any chance of escaping prison. This is why 'Stand Your Ground' is so perverse. Under the Florida state statutes, "776.013"  -  passed in 2005 -   effectively expanded the rule known as "the Castle doctrine". This is a version of the old common law from the Middle Ages that states if a stranger enters your home without permission you may use deadly force to defend yourself. (Colorado also has a version of this called 'Make My Day'.)

The problem was that unlike Colorado's more conservative law - which only permits you to kill an intruder once he's in your home- Florida's lawmakers opted to expand the purview not only to the easement or sidewalk outside but to "any place where the citizen has a right to be". Thus, bowling alleys, churches, movie theaters, parties....the Everglades....you name it. Oh, and the vicinity of gated communities if an SYG groupie thinks he might have spotted anyone "suspicious", i.e. "criminal".

TIME noted in its piece last year that despite SYG's vast breadth only 20 of Florida's 153 lawmakers opposed the law. Thus did Repuke Gubernator Jeb Bush sign it into law on April 26, 2005 even as the NRA got a major Jones - having fought like rabid ferrets to get the law passed since the late 80s. As the face of its PR push the NRA used a white- haired granny (Marion Hammer) who happened to be the first female president of the organization. She once declared that the key to winning the gun debate was to "get rid of all liberals".

Given such twaddle readers won't be at all surprised to learn that Zimmerman benefited mightily by over a half million bucks in right wing extremist contributions to hire the best legal team he could. And as we know in this country, as the quality of your legal team goes so go your chances of escaping a charge.

However, what people really need to put their focus on is the idiotic, deranged Florida law ('Stand Your Ground") that has been responsible for nearly 50 homicides the past 7 years not being prosecuted as such. (In the year before the law went into effect, 2004, Florida authorities deemed 8 homicides "justifiable" compared to 40 deemed such by 2010, according to the TIME piece).

Meanwhile, insane right wingers salivate over the prospect of 2 million "George Zimmermans"   able to carry their Kel-Tec PF or Glock 9mm pistols into any schools to supposedly protect the kids. This being their "solution" to another Newtown. In that case, god help us all.  More likely than not, with such trigger-happy tools in abundance it's the kids who will pay the price.

In the meantime, consider the possibility of hundreds of Zimmerman-like shooting situations erupting all over the country. This is possible if the NRA's next pet law, the National Right to Carry Recpirocity Act, gets passed in the future. This law would mandate that  all the gun control states (e.g. New York)  to allow inhabitants of the 'stand Your Ground' states such as Florida, to tote their weapons anywhere they want ....whether in Times Square...or on Hollywood Boulevard. Think of all the potential shooting situations that could erupt, from a young black guy accidentally bumping into an elderly white Florida cracker, or a black kid making eyes at a white woman from Sanford, packing her own heat.

Think the Zimmerman case was awful, wait until this law passes!

Am I a "liberal" gun-hater? Not at all (see photo). But there is a difference between gun fetishism and sound, rational gun ownership and this nation crossed it when - in 2009, it allowed weapons to be carried into national parks (as part of an amendment to passing a credit card law- which again Obama punked out on, as he ought to have vetoed it!). Now, these 'Stand Your Ground' laws have made the distinction between justifiable homicide and blatant homicide carried out under cover of the law almost impossible for even a King Solomon to parse- let alone a FLA jury of 6 mothers.

Let us hope Florida wakes up before it's too late, and somehow enough sane members of its legislature repeal the nutso 'Stand Your Ground' law. If they don't - and it's unlikely so long as repukes control the legislature- look for more of these Zimmerman -like incidents!