"Spare the Paddle?" Not for These Female Teachers!


The tendency to accept corporal punishment as a behavioral "solution" in schools, in these United States, is nothing short of appalling. I myself hadn't been aware of the extent of paddling, for example, until attending the American Atheists Convention in Orlando, in April of 2001, which featured Jordan Riak as one of the keynote speakers. Riak is a retired teacher and activist against corporal punishment. He has unabashedly compared paddling to rape and been a consistent thorn in the side of paddlers across the nation. A print interview with Mr. Riak can be read at the link below

“The sexual nature of the buttocks is explained not only by their proximity to the genitals, but also by their high concentration of nerve endings which lead directly to sexual nerve centers. Hence, the buttocks are a major locus of sexual signal”


"Sadly, the mindset of folks like these is stuck in that traumatic past and they see every incident of c.p. as a replay of what happened to them. So, by extension, they see us at TWP not only as defenders of what happened long ago but as the same persons that abused them!


Actually, no. I know absolutely none of you are the same as the nun (Sister Francesca) that caned me in the boys' lavatory (using a 1m pointer) at Immaculate Conception after accusing me of tossing wet paper towels up to stick on the ceiling (actually done by two culprits who left just before she entered). But I do know, am  fairly sure, that what I experienced as instant outrage, humiliation and subjugation, the kids you paddled with your 16-incher also experienced.


But we can be consoled at least by their further words:


"Nothing could be further from the truth! As in our MISSION STATEMENT, we believe that any use of c.p. must be Judicious, Moderate, and Sparing."


Ah yes, "we're going to paddle you using a 16" implement but never mind, we are "judicious, moderate and sparing". I love the last word! Sparing! "So you, kid, will only get three swats from my sixteen incher, as opposed to twenty -three!" The kid is then supposed to appreciate the mercy afforded him and be thankful his butt is only red and swollen for one day as opposed to bruised to the point he needs hospitalization for a week.


"In all of these cases, we would have stopped the abuse had we been there. But we cannot and no one can “go back.” However, for those who were abused -they go back constantly and that is tragic.


To those, we plead to you to get counseling!"


Wow! Get counseling? From a therp? How does that erase the trauma experienced at the time? A better solution, for those of us that were abused, is to find a way to halt current thrashings/ paddlings of today's kids. Because, after all, what are you paddlers teaching by your actions? You're teaching that brute force is the only answer or response  to a class discipline problem.


The good news is that these female teachers, all of whom graduated from schools in the Deep South - which features the majority of paddling states- in red, see map below: 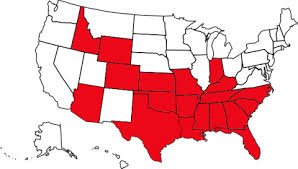 are no longer feeding their blog in terms of rationalizing their "moderate and sparing" paddling practices. The bad news is that in the period since their TWP blog entries ended, dozens more kids have probably met the business end of one or other of the women's 16-inch paddles, to their shame and pain!