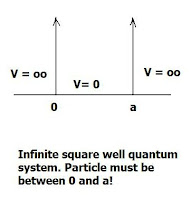 The quantum "box" actually called a 1-dimensional infinite square well, is perhaps the simplest quantum system to which first year students in QM are exposed. It is also an excellent case to see how differential equations are applied.

One notes the box limits are from 0 to a and this is the x -direction. Inside the box the potential V = 0 and outside, V = ¥, hence the term, "infinite square well".From these constraints, one sees that any particle cannot be at locations, x > a or less than 0, else it would have infinite energy. As we know, energies in QM are quantized, so no infinities are possible.


Therefore, outside the interval (0,a) one has the quantum wave form:

Thus one sees the very basis of quantum mechanics, in the fact that energies associated with the quantum system must be quantized. Energies do not occur in unending streams but rather parceled out in "chunks" we call quanta. These differ according to the energy level in the system. One may also be concerned with where the particle is within the gien system. In this case one uses the probability density  ‖y‖2.


The probability P ab of finding a particle between a and b:


Problems for the Math Maven: