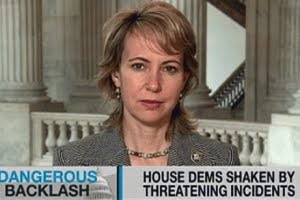 Gabrielle Giffords, halting though her speech was last night in an interview with Diane Sawyer, made it clear that with the Newtown slayings it's now past time to do something about gun control.

In addition, in saying this, she made certain Sawyer understood that both she and her husband  Mark Kelly were gun owners themselves (Gabby of a Glock 9mm), and certainly didn't want to take away any reasonable Second Amendment rights. But those rights, as I made plain in an earlier blog, cannot extend to multiple capacity clips/ magazines for use with automatic weapons. Nor can they extend to allowing mentally unstable people to purchase guns with barely a hi and goodbye. This has set the stage for a new PAC sponsored by Giffords and Kelly: 'Americans for Responsible Solutions."

In an  op-ed   appearing in USAToday, Giffords and Kelly made clear their PAC's goal is to counter the NRA gun lobby's imperious influence on lawmakers.  They wrote:

"Special interests purporting to represent gun owners but really advancing the interests of an ideological fringe have used big money and influence to cow Congress into submission,"

"Rather than working to find the balance between our rights and the regulation of a dangerous product, these groups have cast simple protections for our communities as existential threats to individual liberties. Rather than conducting a dialogue, they threaten those who divert from their orthodoxy with political extinction."

""America has seen an astounding 11 mass shootings since a madman used a semiautomatic pistol with an extended ammunition clip to shoot me and kill six others,"

Giffords and Kelly also made a startling point (which really ought not be that startling) that the NRA's plan of "having good guys with guns" in schools is not a very bright one. Giffords and Kelly pointed to the case of a man - a GOOD guy- who DID have a gun when Jared Loughner opened fire at the Jan. 2011 Tucson gathering. And know what happened? He nearly shot the guy that took Loughner down! (Plus the guy had "training"). So much then for this nonsense of training teachers to use (probable) handguns against a determined maniac with an AR-15 who has the element of surprise. The latter would have the teacher and most of her pupils six feet under before she could take the safety off!

This is especially  spot on in the wake of the grim statistics cited by Rachel Maddow in her show last night: 57,000 gun deaths in the past two years, including 5,000 children. If this was the body count from terrorist attacks you can bet your sweet bippy that every Federal agency would be on it, with "fusion centers" and the spy machinery pumped to a prime, and airports covered by instant security facial checks, plus spot checks at every turn.

But.....because extremist extension of 2nd amendment "rights" is regarded as an individual issue, nothing is done and the body count mounts. Even as I write this they are still picking up the pieces after another Aurora, Colorado shooting that left four dead. Where does it end? Will it take a maniac opening fire on cribs in a nursery to finally get effective political action? I hope to hell not! This is why after the slaying of 6-7 years olds something MUST be done.

Giffords and Kelly's PAC aims to target gun control at multiple levels, which is good. Primary emphasis as they put it in their interview with Sawyer must be on longer, more detailed background checks and eliminating any short cuts such as purchase via the internet or at gun shows. The checks themselves need to be thorough enough to sift through assembled data (surely all the fusion centers in the country have this!) for outlier mental freaks like Seung Hui Cho the Virginia Tech mass murderer, and James Eagan Holmes, the Aurora mass slayer.

Then, their PAC needs to put all the pressure it can on a do-nothing GOP-centered caucus that hasn't even seen fit to appoint a head for the ATF - the oversight agency for weapons. The end must be to re-instate the automatic weapons ban of the 1990s, and also the banning of all mega -capacity magazines. If the bastards need to be shamed into doing it, by forcing the House to hold hearings with gun victims, so be it.

But this country cannot justify its continued schizophrenic approach to citizen safety and domestic security - by going ape shit in its surveillance of ordinary citizens (e.g. Occupy Wall St.)  to extract the possible prosecution of a few assorted terrorists (domestic or foreign) - who may kill maybe 1,000 with a 'dirty bomb' or 200 with a plane bomb, while over 57,000 are offed every two years by home grown weapons! It makes no sense, and it shouldn't to any congress, President, or other National Security honchos.

Good luck to both Giffords and Kelly on their quest, they will need it!
Posted by Copernicus at 9:01 AM