The Left Should Not Accept Any "Deal" Without Ironclad Provisos! 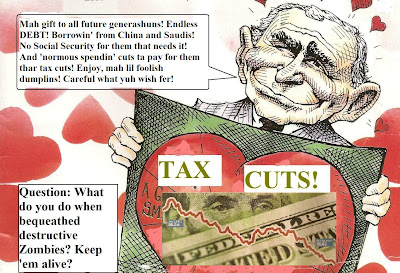 It appears we've gone past the 11th hour, regarding a patch work "fiscal cliff" deal, with the Senate having voted on it and now we await the votes of the tea party psychopaths in the House. Will they sign on? I doubt it, but that's a separate issue from what I am concerned about along with many on the left.

We already know the emphasis has been on the tax side of the issue, with the temporary deal allowing taxes to only be increased on those earning over $400k a year. For those who may not know, that number falls in the mean income range of the top 1%. If it is set in stone, it means that many more spending cuts (most likely in social insurance programs) must be found to compensate for the net revenue lost by going to the higher income threshhold. I estimate this to be roughly $400b more in cuts. This is after the 'Budget Control Act' already established $1.5 trillion in spending cuts to assuage the repukes and their ilk last year.

The gist of the news this morning, is that provided the House also votes on this makeshift deal...a big if...the tax cuts can be made retroactive. Woosh! As if no tax increases ever existed!

However, Dems in the House should not sign on to this temporary deal unless there is an ironclad proviso that that $400k threshhold is temporary only. It cannot be a part of any final deal. If it is, it means that in all likelihood we will be screwed by some 'chained CPI' nonsense. Further, the House Dems ....particularly the Progressive Caucus, should not accept any final deal that does not include taking the debt ceiling out of any future negotiations. It is time someone with balls pull the plug on this foolishness once and for all. We cannot, in order to remain a semi-stable nation, allow a pack of deranged jackals and Tea Party lunatics in the House to use it as a massive cudgel each time deficits come to the fore.

We also know, as mentioned numerous times by pundits in the know over the W/E (e.g. on Chris Hedges' 'UP' and Melissa Harris -Perry's followup MSNBC show) that these Teepee lunatics aren't cowed by anything other than being "primaried on the Right". In other words, friends, as long as they act the part of total psychopaths and lunatics their House seats are safe (thanks to gerrymandering after the 2010 mid -terms).  This means no amount of rational appeals will work on them. The only thing they can be made to understand then is executive force. As in using the 14th amendment to stop them from using debt ceiling increases as an economic terror tactic. (The President thereby incepting debt ceiling increases on his own, instigating at last a Constitutional crisis for which this matter can be settled once and for all.)

Personally, as Sen. Tom Harkin observed, I'd much rather no deal than a terrible deal which effectively nullifies the results of the recent electoral win. As I blogged before, elections have consequences, and if the Teepee Reeps don't understand that then they must be made to do so. That means the invocation of extraordinary executive powers - including executive orders- to punish Reep intransigence and terrorism that threatens the political stability of the country.

In addition, I am sick of this ongoing spiel by zero intellect pundits that puts blame on both sides! No, it is not on both sides! It is on ONE side, the freakin' psycho Tea Bagger dominated House Reepos! So, we need to drop this false equivalence one time.

Apart from that, Happy New Year! My one hope is that's not as terrible as the last, but after viewing Oliver Stone's latest instalment (Reagan, Gorbachev and the Third World), on his 'Untold History of the United States', I am not sanguine. Not one bit.