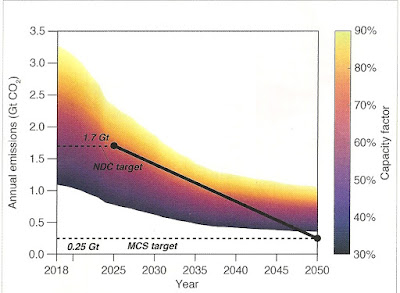 Black line shows the gap between where we are now and where we need to be by 2050 in terms of power plant emissions. Failure will have many negative repercussions.

It's  laudable that President -elect Joe Biden plans to rejoin the Paris Climate Accord, but will it really be feasible to meet the U.S. commitment?   This recently came up in the latest issue of EOS: Earth & Space Science News (November, p. 77).  Basically the research cited, by Shearer et al, considered the long term implications of the natural gas (e.g. fracking) boom from the perspective of "committed emissions".  That is, the future cumulative CO2 emissions from fossil fuel energy infrastructure - assuming average lifetimes and utilization rates.

Two quantities implicit in this research are: 1) the 'NDC' or Nationally Determined Contribution (denoted by the upper dashed black line in the graph), and 2) the 'MCS' or the mid-century strategy target, released by the U.S. government.   That would be the very bottom dashed line shown.  And the question to be considered is whether we can go from the NDC line to the MCS target line by 2050.  Right now, the computations show we can't.  It's simply mathematically and physically infeasible unless there is major rationing by consumers.  Indeed in a December 13, 2015 post I warned of the enormous gap between what the Paris planners hoped for and what many believe will come, e,g,  citing a Guardian UK article from May 17, 2015 which bluntly pointed out:

The failure to limit the temperature increases means that the goals can't be met, not without enormous sacrifices which simply aren't evident. In the context of the Eos-cited paper we are informed that the upper dashed line (for the NDC) can be met at the current average "capacity factor" or 60%, i.e. in 2025.  However, this must decrease by a third, i.e. to 40%  (or below) to meet the target line in 2050.  So far there is no evidence this can be done in 25 years.

Much of this failure can be put at the feet of the current occupant of the White House, the orange fruitcake pitching a daily hissy fit because  he didn't win re-election.  Recall soon after he bailed out of the Paris Accord in 2017 he bellowed:

"I was elected to represent the citizens of Pittsburgh, not Paris.”

Yeah, whatever.  Never mind that ever since our planet's been subject to a radiative heating effect equivalent to 2.5 x 10 7  TJ injected each year into the atmosphere or roughly the equivalent of 400,000 Hiroshima size A-bombs.    So along with his embrace of fossil fuels, Trump can be said to have played a large role in cratering this planet's chances of escaping the runaway greenhouse effect.  Here's the skinny:  All the coal and gas-fired plants must be retired in 35 years to even have a slim chance of meeting the target in 2050.

The sobering take in the Eos piece is that "currently operating coal and gas plants are incompatible with U.S. pledges made under the Paris climate agreement, requiring a substantial reduction in the capacity and/or lifetimes of these plants even if no new fossil capacity is added."

That then is a serious hole Trump and his cabal have put us into, and again this assumes the plants are operated as they have been historically.   The basic takeaway conclusion from the Shearer et al research:

In other words the decrease in  annual CO 2 emissions from power plants  is more than offset by the lower relative decrease  in "committed emissions".   Hence, the unwanted CO2 emissions are gaining.

Can you say batting on a losing wicket?

Posted by Copernicus at 5:02 AM