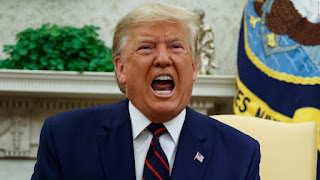 "I want my damned win and I don't care if I gotta burn the country down to get it!  You got that, Giulani!"

“This is a manufactured crisis. It is a president abusing his huge powers in order to stay in office after the voters clearly rejected him for re-election. This is what many of the founders dreaded.” -  Historian Michael Beschloss, NY Times yesterday, 'Trump's Attempts To Overturn The Election Are Unparalleled In U.S. History

"Joe Biden is going to have to do something, in addition to juggling Covid, we haven't seen a president do since the 1920s.  He's going to have to push for a wholesale, constitutional structural reform in the United States of America.  This may be a bigger task than he is up for, or he expected. But as I've been saying, Donald Trump showed America and  the world that our Constitution is really not worth the paper it's written on.

It's purely a gentleman's agreement between really really rich guys. And if those guys decide to be rogues or bandits then none of this stuff counts.  We are hanging by a thread. Now that thread happens to be a lot of people who've  decided 'I'm going to follow the facts, I'm going to follow the rules.  It seems pretty obvious that this guy Biden won.'

But that's not a safe way to keep your democracy functioning. And in fact these court rulings to me don't say the guard rails are working. It means we're pushing the envelope on how the system is functioning. A few legislators here, a couple of judges there - who don't care about their reputations or having a bad name in history and you could see a state flip.   If you didn't have Democratic governors saying no faithless electors this thing could be done.  The only reason we're having this conversation now is that the autocrat in the office was too incompetent to pull off tis coup."  -  Jason Johnson, Professor or Political Science at Morgan State University on MSNBC yesterday

Prof. Jason Johnson's insights (above) were profound and struck at the core of the electoral turmoil we behold now, with an authoritarian degenerate president pushing every button to try to enact a coup and remain in office;  While Johnson concludes that we escaped -  because of Trump's incompetence -  there are others, like Barton Gellman on ALL In last night,  who aren't buying it.  Gellman told Chris Hayes he still believes it is "not impossible"  that Trump could overturn the results in enough swing states (namely Michigan and Pennsylvania) to have a chance at retaining power.  This despite a popular vote count of Biden beating Trump by  almost 6 million votes.  .  (Recall Gellman is the author of the Atlantic article 'The Election That Broke America' e.g.

How so?  Well not via lower court cases, 32 of which the Trump cabal has lost thus far. No, rather by bullying state legislatures to refuse to certify vote counts - as in Michigan and Pennsylvania- and then to drag it out to put pressure on the same legislatures to appoint "alternative" slates of electors for Trump.  This very fact that state legislatures and electors have the potential to be manipulated by an authoritarian asswad shows the Electoral College is too dangerous to retain.  It draws out elections, despite a clear popular vote winning margin by one candidate, and makes it possible to cheat or manipulate "swing"  states to snatch their electoral votes. According to Maggie Astor in the NY Times:

"A key part of the G.O.P. strategy has been to delay certification processes in battleground states that Mr. Biden won, in the hopes that, if state officials miss their deadlines, legislators will subvert the popular vote and appoint pro-Trump slates to the Electoral College. But that’s extremely unlikely to happen."

Trump is doing it right now!   In Pennsylvania he's managed to get the Repuke state legislature to proceed with an "audit" even after certification.  He's also invited the 2  Republican leaders -  of the Michigan House and Senate -  to the White House where he plans to apply pressure to get them to refuse to certify the results next Monday. (In Michigan, the results are certified by a four-person board that has two Democrats and two Republicans, raising the prospect of a deadlock. The board has a 20-day window from November 23 to complete the certification with at least three votes.)  Jeff Timmer, of the Lincoln Project, on Maddow last night, when asked if this duo could resist Trump's pressures, doubted it.  "He has too powerful a personality!  Besides, they couldn't even resist the goons with long guns at the Michigan state house some months ago, so no way will they be able to resist Trump!"

Bit by bit this traitorous,  sore loser psychotic rat - who ought to have been hung by now  - is chipping away at our electoral edifice and hoping to overthrow the will of the people. There is no precedent for the Trump team’s widespread effort to delay or undermine certification, according to University of Kentucky law professor Joshua Douglas.

“It would be the end of democracy as we know it,” Douglas said. “This is just not a thing that can happen.”

NONE of this would be possible if there was no Electoral College. An archaic entity whose formulaic process only serves to stoke  and prolong drama. And which - by drawing everything out in exasperating stages -  tempts ne'er do wells to cheat when swing states with narrow margins for wins appear ripe for the plucking.  Indeed, the entire, multiple- stage process toward a final determination of the winner lends itself to exploitation and cheating, even brazen calls to do so.

As exemplified during a one hour and 45 minute conference at RNC Headquaters yesterday, when a crackpot conspiracy wacko named Sidney Powell called for all the electors in the 6 key swing states to be replaced by Trump electors.   Don't take my word, google the event and check it out.  Again, she is expressly calling for manipulation  of electors to keep Trump in power. Chris Krebs, the Trump administration election official fired last week over his comments that the 2020 election was secure, tweeted: “That press conference was the most dangerous 1hr 45 minutes of television in American history. And possibly the craziest.”

In this regard let's also note Gellman warned Chris Hayes last night that should Trump's efforts to decertify state elections etc. make it to the Supreme Court it is possible for him to prevail, i.e. in the case of disputed electors.   This is given:

"The Supreme Court has lately demonstrated it is very sympathetic to the power of state legislatures to decide on the manner of elections and the manner of appointment of electors."

Take away the whole Electoral College -  and the process attendant upon its role in naming a president -  and the cheating and coup efforts diminish radically.  This elicits the question of what makes the Electoral College so dangerous, so inimical to democracy, so favorable to executing a coup as Trump is now trying..

First consider that U.S. states are certifying their results over the next few weeks in a staggered process ahead of December 14, the date on which the Electoral College formally meets to confirm the next president.  The staggered dates  - as opposed to one single nationwide  date - means a determined autocrat has the time and opporunity to press the buttons on different critical states to torpedo their certifications. He can then buttonhole different legislators - at different dates- to turn up the pressure or twist arms.

In addition, the lengthy timeline provides space for Trump to cast further doubt on the clear verdict of the American people and to block the transition process to Joe Biden’s administration.  In this case, his threat of Twitter demolition and blowback hangs over Emily Murphy -  the head of the General Services Administration.  Though her primary loyalty ought to be to the Constitution she knows if she approves the "ascertainment" - allowing Biden's transition - she will lose her head (and job)  thanks to Trump.  She also knows she will likely receive death threats from insane Trump followers, as the Secretaries of State in Arizona and Georgia already have.   (Again, remove the Electoral College, which features separate state tallies, and certifications, and there is no more motivation to issue death threats  because no particular state electoral votes or electors are at stake.  One single national popular vote tally ends it all and this can be determined early if the margin is large- like Biden's is now.)

It is true - if all goes according to Hoyle - the steady sequence of certifications will make it harder for the Trump administration to continue to resist Biden’s transition.  Particularly once states that give the president-elect a majority in the Electoral College have finalized their results.   However, if Trump manages somehow (as Barton Gellman worries, and Janice too) to toss out  certifications in at least two states - say Michigan and Pennsylvania- and then have those electors replaced with Trumpies-  he could conceivably end up with 268 electoral vote-   46 of which would have been stolen from Biden's column.

He would then only need to turn one more vote - maybe in the special Nebraska congressional district (electoral vote of 1) to end up in a 269-269 tie with Biden.   In this case the tie would mean congress must weight in, and though Dems have the majority in the House, it is state legislature reps which determine the final count - and that means more Reepo votes.  Result, the tie is broken by a superior GOP count and Trump retains power.   This is one of the remote but possible scenarios that people like Gellman fret over.

The final stop on the Electoral College train is January 6, when Congress counts the Electoral College votes at a session presided over by Mike Pence.  One can only hope that long before that Joe Biden has a team of legal specialists ready to do hand- to- hand combat to fight the Trumpies in the courts to save the election - if that's what it takes.

In the meantime, Jason Johnson's call for "constitutional structural reform" must start with removing the Electoral College - whose presence will continue to make potential coups more likely - given what we've seen in this election cycle.

Trump uses power of his office to try to reverse election 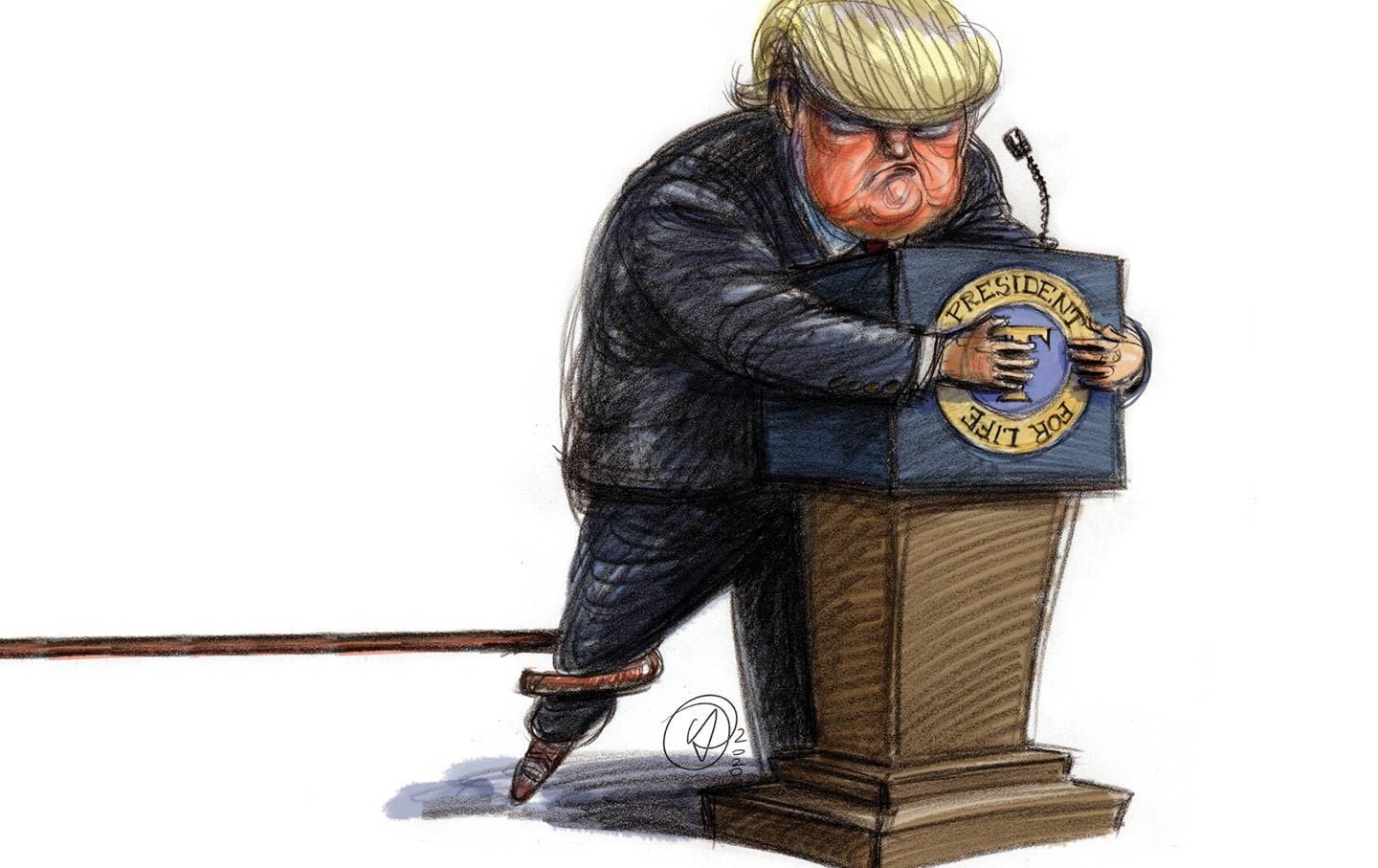 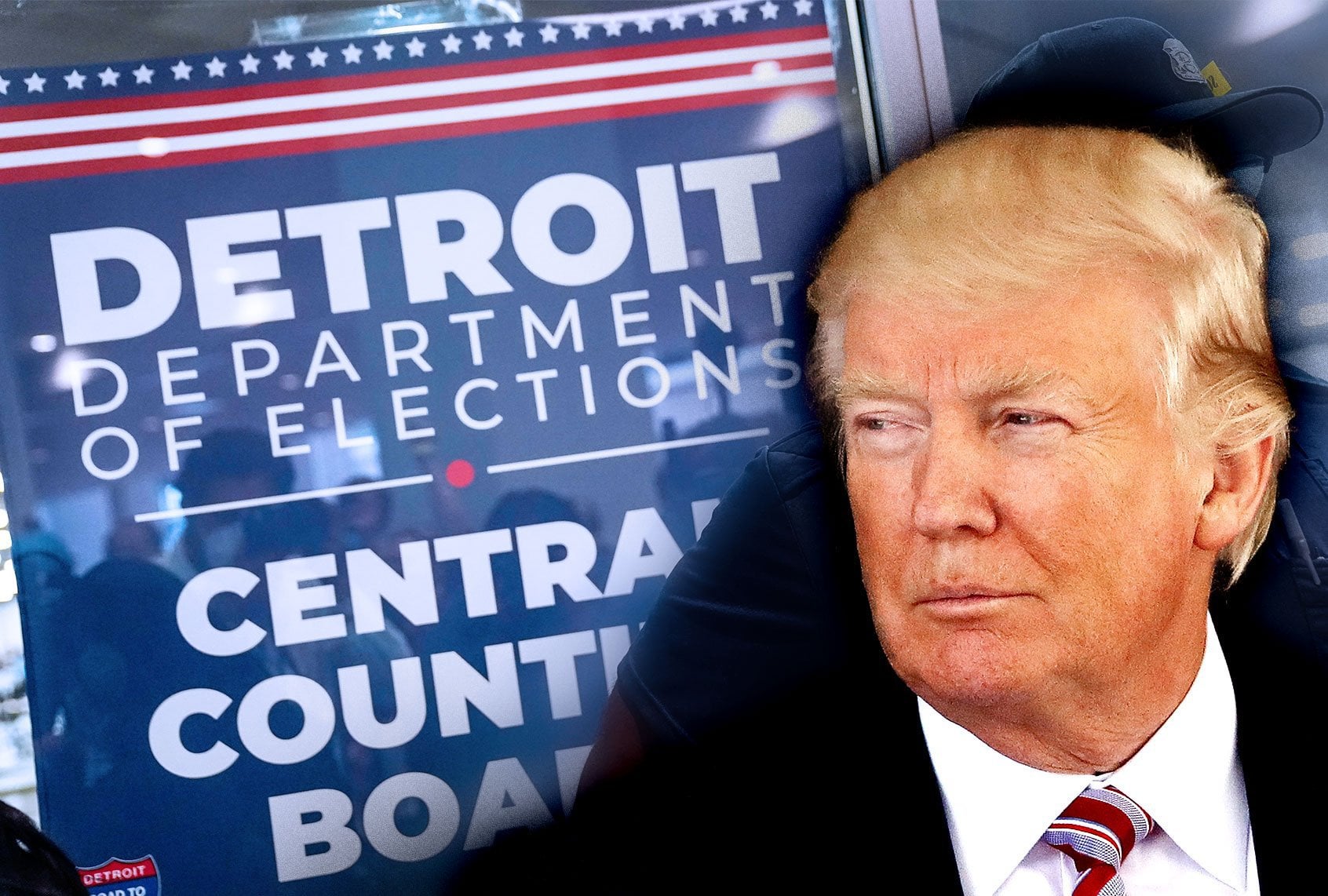 2020 Elections | Rudy Giuliani
Here Are 5 of the Most Ridiculous Moments in Rudy Giuliani's Performance in Trump's Election Case
by Cody Fenwick | November 19, 2020 - 9:04am | permalink 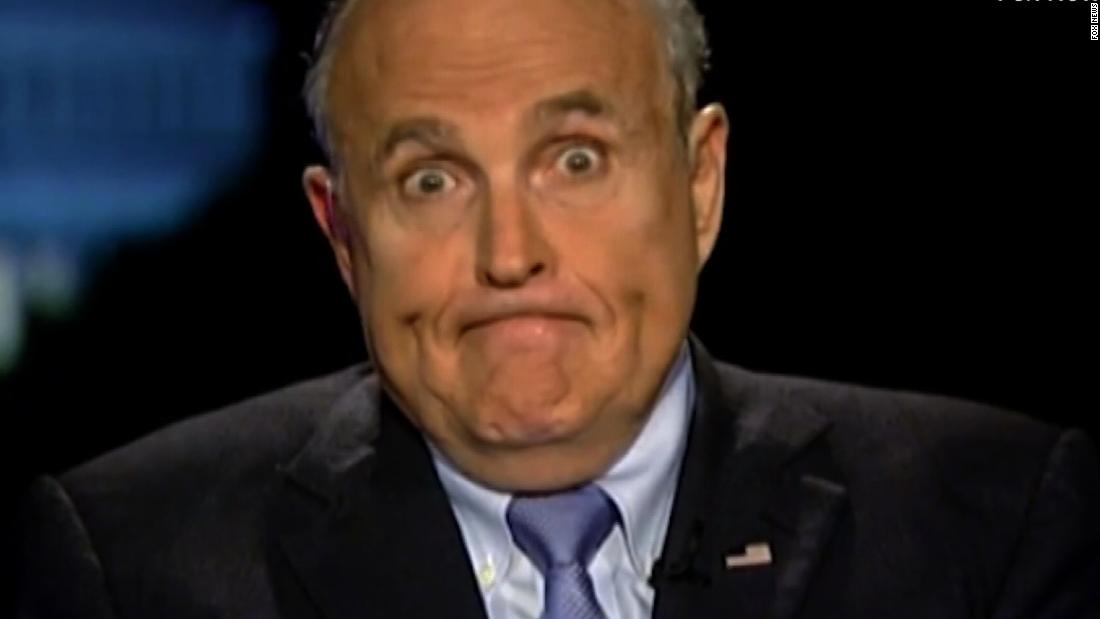 Republicans
Who Needs Zombies When We Have Republicans? 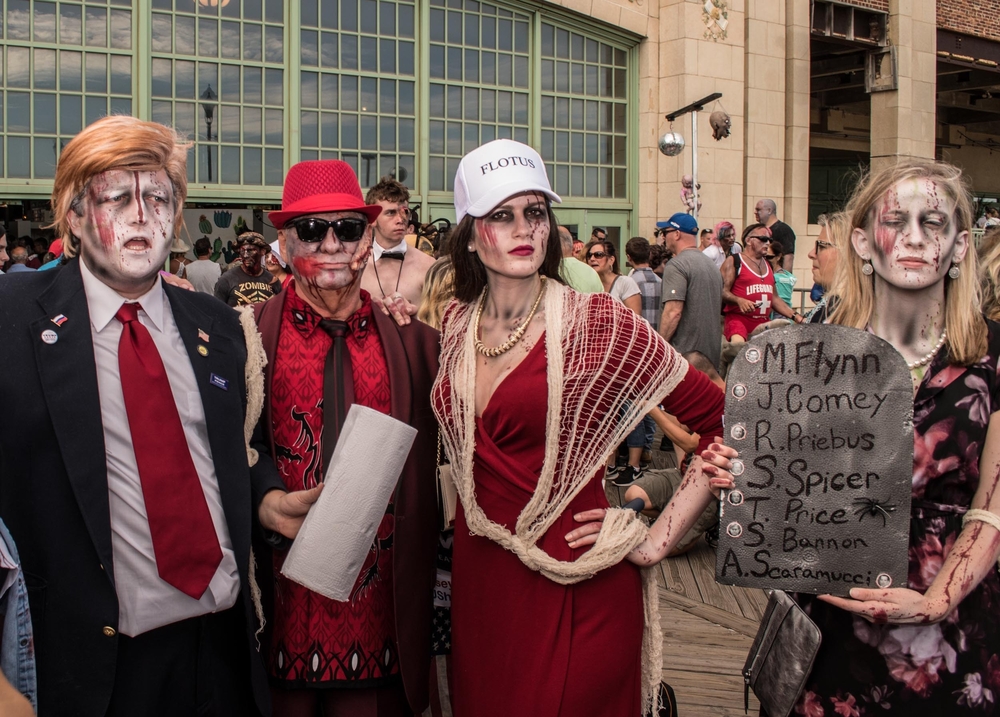 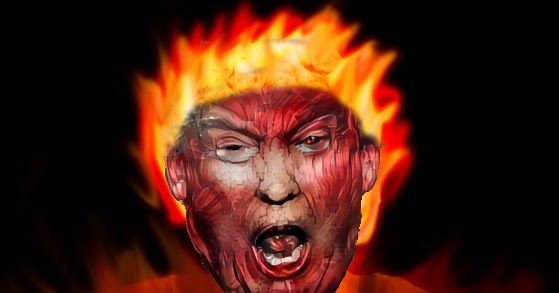 Posted by Copernicus at 6:35 AM