Graph showing the rise in temperatures since 1900. 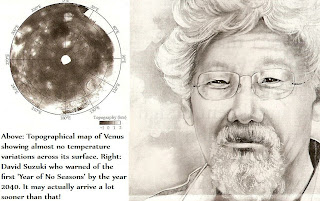 Even as Blowhard Dotard yesterday blustered to those gathered at Davos about ignoring the "perennial prophets of doom, the heirs of yesterday's foolish fortune tellers and their predictions of the apocalypse"  -   a veritable climate apocalypse was brewing across the planet.   And so  we beheld Greta Thunberg (Trump's intellectual superior) setting the record straight with a note of reality.  I.e. that “our house is still on fire” and that “naction is fueling the flames by the hour.”i


Incredibly even low IQ Dotard  at least knows that trees are beneficial. They give us oxygen, absorb CO2, provide nests for birds and habitats for wildlife, protect against flooding and even help to clean up air pollutants from traffic.  And so as the world’s forests  have come under increasing threat from fires, agriculture and logging, the World Economic Forum has launched an initiative to ensure 1 trillion trees are restored.  And Trump, to avoid his rep as a climate renegade,  jumped onto the  tree planting bandwagon.  But in relative terms it's akin to trying to save the Titanic with a bucket brigade. In other words, the tipping point is already upon us - with the record heat of the past five years proving it - and David Suzuki's first year of no seasons now imminent.
So yeah, Trump is on board at least to the extent of a con.  Though like other climate deniers he did toss out the toxic memes that any form of genuine mitigation - like higher gas taxes, or cutting carbon emissions - amounts to 'loss of freedom' and socialism. But Greta Thunberg wasn't having any of that empty blather.  As  Thunberg responded to him at Davos: “Planting trees is very good of course, but is nowhere near enough and cannot replace real mitigation.” and said so, e.g.:
https://www.youtube.com/watch?v=I3qbXSf93bc
Adding:

"Our house is still on fire, and your inaction is fueling the flames by the hour"

Recall Trump and his nitwit cult never got over Thunberg getting TIME's 2019  Person of the Year, and were so desperate they even reworked the TIME cover, e.g.

Photoshopping Trump's empty head on Thunberg's body.   The only word that comes to mind? Pathetic!

Thunberg's reinforced warning isn't apocalyptic doomsaying either.  We now know  that the year 2019 was the second hottest on record for the planet’s surface, according to latest research. The analyses reveal the scale of the climate crisis: both the past five years and the past decade are the hottest in 150 years.  All indications now are that climate author David Suzuki's forecast of the first "year of no seasons" will indeed occur by the year 2040 - if not before.

In his book It's A Matter of Survival (Harvard University Press, 1991) co-authored with Anita Gordon, Suzuki wrote in Chapter One, 'Beyond Your Worst Nightmare':

On page 8 of the same chapter, the authors go on to link the total disappearance of the seasons worldwide to global mean temperatures being 5 C (9F) above what they were in 1991.  All signs  now are that we may equal or surpass that  - especially given there is absolutely no evidence that the planet's inhabitants are prepared to take the measures needed: significant taxes on gasoline, major emissions cuts back to 1990 levels, etc.  Hence we're living in a fools paradise.

Attesting to this we have the succession of records being broken year after year.   Described by one paleo climatologist as: “the drumbeat of the Anthropocene”.  That drumbeat   is bringing increasingly severe storms, floods, droughts and wildfires- including the recent ones smothering Australia and New Zealand in smoke.   The drumbeat is also bringing painful economic symptoms as WSJ columnist Greg Ip recently observed ('Economic Impact of Climate Change Is Here', Jnuary 17, p. A2), noting:

"McKinsey Global Institute estimated  that 'unusually hot summers' affected 15 percent of the Northern Hemisphere's land surface in 2015, up from 0.2 percent before 1980."

This is ominous because the current projections are that 2 billion more people will be added to the population by 2050.  How will they get sufficient food given the probable declines in grain yields?  Indeed, where will they all live, given vast land areas will become almost uninhabitable by then, thanks to  persistent, catastrophic drought or the prevalence of monster hurricanes, typhoons?

We also need to be more aware that we've been living on borrowed time thanks to the oceans absorbing the bulk of excess heat. An amount one specialist analogized to "five Hiroshima bombs being detonated every second."   This is serious given more than 90% of the heat trapped by human greenhouse gas emissions is absorbed by the oceans. On Monday last climate scientists revealed 2019 as the warmest yet recorded in the seas, calling it “dire news”.  It is indeed, given ocean life as in the food chain that supports thousands of  animals, is now at risk.  The krill population that feeds the Chinstrap Penguin alone has decreased by 25-30 %.  Other sea life - from the fish we consume, to crustaceans- are also at risk.  When Bill Maher informed his HBO audience two years ago that there may be no fish left at all in fifty years, no one believed it.  W(ell, it is more than likely there will still be Jellyfish)

As we can see from the attached (top) graph:  the average temperature in 2019 was about 1.1C above the average from 1850-1900, before large-scale fossil fuel burning began. The world’s scientists have warned that global heating beyond 1.5C will significantly worsen extreme weather and suffering for hundreds of millions of people.  The World Economic Forum’s global risk assessment for the next decade, also found the top five dangers were all environmental, including extreme weather, failure to prepare for climate change and the destruction of the natural world.  This is all supported by the WSJ's Greg Ip who writes (ibid.):

"Climate crises in the next 30 years might resemble financial crises in recent decades: potentially quite destructive, largely unpredictable, and - given the powerful underlying causes - inevitable."

“What is important is the totality of evidence from multiple independent data sets that the Earth is warming, that human activity is driving it and the impacts are clearly being felt. These announcements might sound like a broken record, but what is being heard is the drumbeat of the Anthropocene.”

“It’s now official that we have just completed the warmest decade on record, a reminder that the planet continues to warm as we continue to burn fossil fuels,”

Let's also note that while instrumental temperature records stretch back to 1850, data from ice cores indicate that today’s temperatures were last seen at least 100,000 years ago. Furthermore, the level of carbon dioxide is the highest it has been for several million years, when the sea level was 15-20 meters  higher.By the early 1990s, climate scientists completed more precise studies of ice cores extracted from the Greenland ice sheet. Dust and oxygen isotopes encased in the cores provided a detailed climate record going back eons. It revealed that there had been 25 rapid climate change events like the Younger Dryas in the last glacial period.  The evidence in those ice cores  - many of them originally studied by Univ. of Alaska climate researcher Prof. Gunther Weller (at the Geophysical Institute) -

Prof. Weller's  work and that of colleagues  has disclosed that over the past 800,000 years the CO2 concentration of  300 ppm was never crossed until after the advent of the Industrial Revolution and the burning of fossil fuels.  Prof. Weller's work was also critical in highlighting the phenomenon of "Arctic amplification".  In papers and seminars delivered at the GI over 1985-1990 he pointed out that a much warmer Arctic translated to a much more unstable polar region with more frequent intrusions ("waves")  of polar air

The four temperature datasets are compiled from many millions of surface temperature measurements taken across the globe, from all continents and all oceans. They are produced by the UK Met Office with the University of East Anglia (UEA), both Nasa and Noaa in the US, and Europe’s Copernicus Climate Change Service. Small differences between the analyses arise from how data-sparse polar regions are treated, but all agree that the past five years are the warmest five years since each global record began.

The Met Office’s forecast for global average temperature for 2020 suggests this year could well set another record and is very likely to be among the top three hottest. The UK government will host a critical UN climate summit in Glasgow in November. The UN secretary general, António Guterres, and many others are urging nations to increase dramatically their pledges to cut carbon emissions, which would lead to global temperatures rising by a disastrous 3-4C.

“It is obvious we are not succeeding in preventing dangerous anthropogenic interference with the climate system, which was the main goal of the original 1992 UN climate change convention,” said Bob Ward, of the Grantham Research Institute on Climate Change at the London School of Economics.

“Even if we succeed in limiting warming to 1.5C, this would not be a ‘safe’ level of warming for the world,” he said. “Therefore we must focus on cutting global emissions to net zero as soon as possible. We know the transition to a net zero economy is the growth story of the 21st century.”