Other Voices Weigh In On The Impeachment Hearings 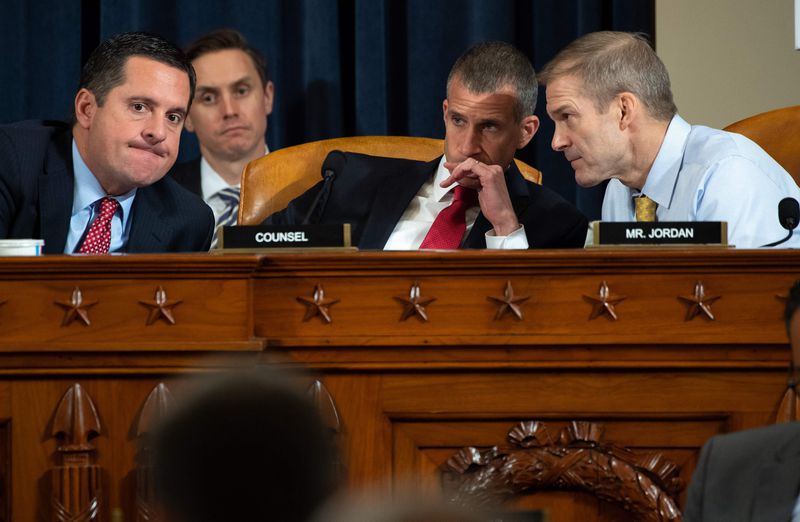 Below please find other voices, bloggers sounding off about this week's hearings:

"House Speaker Nancy Pelosi repeatedly pounded home on Thursday the idea that “bribery” is a central charge in the impeachment inquiry surrounding President Donald Trump’s Ukraine scandal during a briefing with reporters.

“The devastating testimony [on Wednesday] corroborated evidence of bribery uncovered in the inquiry and that the president abused power and violated his oath by threatening to withhold military aid and a White House meeting in exchange for an investigation into his political rival,” she said of the previous day’s pubic hearing. “A clear attempt of the president to give himself the advantage in the 2020 election. Doing so, as I’ve said to the president, jeopardized our national security, undermined our national security, jeopardized the integrity of our electoral system.”

She emphasized that “bribery” is listed in the Constitution as one of the two named impeachable offenses.


Ambassador Yovanovitch, Once a Trump Target, May Become His Nightmare
by William Rivers Pitt | November 15, 2019 - 6:09am |

Excerpt:
Read the transcript! The phone call was perfect! No quid pro quo!

This has been the deeply misleading and self-serving refrain of Donald Trump and his defenders regarding the now-infamous July 25 telephone call between Trump and Ukraine President Volodymyr Zelensky. In deploying this line of nonsense, they seek to convince all who might listen that the July 25 call is the only element of the scandal engulfing the White House.

On Friday, former U.S. Ambassador to Ukraine Marie Yovanovitch will have a golden opportunity to put that brazen misrepresentation to bed once and for all. For Yovanovitch, the story of Trump’s Ukraine extortion scheme did not begin when story first broke several weeks ago. It began for her at the end of last year, when she found out that Trump attorney Rudy Giuliani was taking an active interest in Ukraine, and in her.....

Marie Yovanovitch’s career-spanning professional integrity stood as an impediment to these intentions. If Giuliani was to effectively execute the plan to dragoon Ukraine into doing Trump’s political bidding, it was understood that an individual of Yovanovitch’s reputation would not stand for it. She had to be removed from the board … and so the whispers began....

Was Yovanovitch directly involved in the July 25 phone call, or in any aspect of Trump’s extortion scheme against the government in Ukraine? The answer is a definitive “no.” Yovanovitch, however, is living proof that Trump and his allies were up to some profoundly underhanded shenanigans many long months before that July 25 call, and those shenanigans not only cost Yovanovitch her post, but left her feeling that her own personal safety was in jeopardy


Impeachment Hearings Confirm Republican Party Is Detached from Reality. What Does the Press Do Now?
Eric Boehlert

Republicans proudly advertised their radical ways during Wednesday's impeachment hearings into Donald Trump, wallowing in conspiracies and embracing debunked claims. The question now: How does the Beltway media cover a party that has aggressively removed itself from reality? How does the news business describe and treat a political party that routinely echoes the most unbelievable claims from Fox News and the darkest corners of the right-wing media?

The truth is, this is a decadeslong game of dare that Republicans have been playing with the press, as members of the party uniformly become more radical and more antidemocratic, and basically challenge the press to call them out, knowing full well it won't happen. That's because the Beltway press basically revolves around the central idea that there are two major competing parties in this country and that they are mirror opposites of each other. Republicans are just as conservative as Democrats are liberal.

Why this obsession? Because to concede that one party operates under a radically different set of guidelines (or no guidelines at all, in the case of the GOP), journalists have to do two things. They have to defend themselves against allegations of "liberal media bias," and they have to throw out the old, dependable rule book that allowed the press to lazily suggest that Republicans and Democrats function on the same plane, and therefore had to be treated similarly.

New testimony from State Department employee David Holmes given to the House Intelligence Committee on Friday in closed session confirmed a previous revelation that he had overheard President Donald Trump on a phone call discussing Ukrainian investigations, CNN reported.

Here are five stunning details about Holmes’ opening testimony, as revealed by CNN:


Sondland reportedly told Trump that Ukrainian President Volodymyr Zelensky “loves your ass” — a sign of just how self-obsessed the president is and how he expects those around him to be sycophantic.

This ties Trump directly to Sondland’s work pushing for the investigations in Ukraine. Existing evidence already showed that Trump was deeply involved in the effort, but Republicans have nevertheless tried to raise doubts about this claim. This testimony seems to undercut that argument even more.

3.”Give a shit about Ukraine”
CNN reported:

Holmes also confirmed Taylor’s testimony about the President’s thoughts on Ukraine, saying he asked Sondland “if it was true that the President did not ‘give a shit about Ukraine.’”
Holmes said Sondland responded Trump only cares about “big stuff.”

4. “The Bidens investigations”
In response to a question from Holmes, Sondland reportedly said that the “big stuff” was stuff that benefits Trump, “like the Biden investigation that Mr. Giuliani was pushing.”
This testimony is bad for both Sondland and Trump. Sondland previously testified that he didn’t realize the investigations he was pushing for in Ukraine would have involved the Bidens, which these claims seem to contradict. And it also bolsters the already strong case that Trump had no interest in corruption in Ukraine, as his defenders claim, but only in taking down a potential political opponent.

5. “I could hear the president’s voice through the earpiece of the phone.”
Holmes reportedly said he didn’t take notes on the conversation, but he remembered it clearly. And he also reported that Trump’s voice on the phone call was so loud he could hear what the president said, even though it wasn’t on speakerphone — which raises even more questions about the operational security of the call, which is already highly dubious.
Watch CNN’s Manu Raju report on the testimony:

David Holmes, a career foreign service officer serving in Ukraine, told a congressional panel behind closed doors that he was present when Donald Trump spoke on the phone with U.S. Ambassador to the EU Gordon Sondland about Sondland’s efforts to make Ukraine President Volodymyr Zelensky announce an investigation to Hunter Biden. Holmes opening statement, obtained by CNN, discloses that there are as many as three other witnesses to the call.

Sondland, Holmes and a few others were at a restaurant in Kyiv when the ambassador made the call to Trump. Trump apparently spoke so loudly that Sondland held the phone away from his ear and Holmes, and presumably the others, heard the conversation. In the call, Sondland told Trump that President Zelensky “loves your ass.”
Posted by Copernicus at 8:13 AM