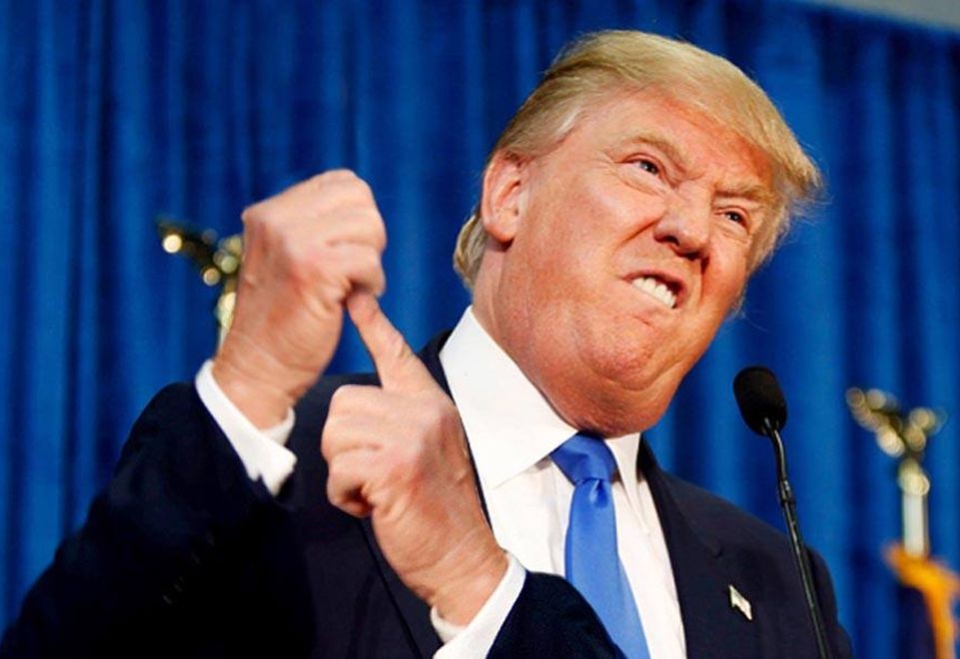 "Hey! I like it when a guy punches a fake news critic in the face!  We oughtta have more of that in this country"

Trump knows his asinine low IQ base is stupid, but he must believe the rest of us are as well after that boffo performance last night in Wisconsin, at yet another "MAGA" (i.e. brown shirt) rally. Only this time he tried to offer up formulaic, meaningless words about the multiple bombs dispatched to his critics, before wailing on the critics and the media.  As Janice said, "How does this piece of shit get away with this?"  Well, because millions are too stupid to see beyond the savage bully and narcissist authoritarian veneer.   And this comes as we learn 8 devices now in total have been found and are now being examined for any forensic clues.

To show how dumb and demented his base is that shows up at rallies, just look at those yahoos who delivered false "it's on both sides" responses last night.  These morons blame the left for harassing the GOP stalwarts - like Sens. Mitch McConnell and Ted Cruz - at restaurants,  and believe in their moron hearts it's like mailing bombs out to political opponents.  Forget about passing a Mensa entrance test, most of these yokels couldn't pass a "Densa" test.

That applies to the WSJ editors as well, writing in one of today's gems ('The Politics of Pipe Bombs', p. A14) this delusional balderdash:

"Close to an election there are attempts to blame the devices on intemperate political rhetoric, especially from Donald Trump. We doubt this and we doubt it in the same way the attack on Steve Scalise and other Republicans ....was the fault of Bernie Sanders."

Totally different, you numskulls, given: a) Sanders was not President but an ardent and justified critic of Repuke policies like preventing those with preexisting conditions from getting health care, i.e. via the ACA, and b) he didn't actually call for outright violence - like punching people in the face or body slamming them like Donnie Dotard has.  But we know the WSJ editors, like the Reep media trolls,  are very worried now these incidents will generate an even bigger Blue Wave.

Look, let's cut the crap and all the "both sides" baloney!  ALL the mail bombs were dispatched to Trump critics, whether politicians or in the media.  It is obvious that some Trumpie sore head got unhinged, probably after one of Trump's recent hate fest rallies, and decided to take matters into his own hands.  And no I do not buy the Right Wing Troll Media's frothing horse shit that these incidents are all  just part of a "false flag" operation to pin the tail on the Right, e.g.

I don't buy that codswallop any more than the deranged Alex Jones'  tripe that Sandy Hook was a false flag and the kids actually slaughtered were merely child actors - now quite alive and romping somewhere in the woods - amused they pulled off a real media coup.  This one designed to grab guns from the gun nuts.

I know the average American now has the attention span of a gnat, and even less memory of recent political events, far less historical ones. But it shouldn't be too much of a stretch or mental demand  to recall the incendiary words of the Swine-in-chief at a rally last week in Missoula, Montana.  Recall this POS celebrated Republican representative, Greg Gianforte, violently attacking Guardian reporter Ben Jacobs last year. Jacobs was simply trying to ask a question about health care, but within seconds was body-slammed and hurt by Gianforte.

The slime criminal thug subsequently won election to the House but later pleaded guilty to misdemeanor assault. At the rally last Thursday, Trump cheered the congressman as a “tough cookie”, and roused his supporters by loudly proclaiming: “Any guy that can do a body slam, he’s my kind of guy.”  What kind of message does that send?

What kind of message got sent last August (is that too far back?) when Trump - after the neo-Nazis marched with KKK-Aryan allies in Charlottesville, and killed a woman protester (Heather Heyer) e.g. 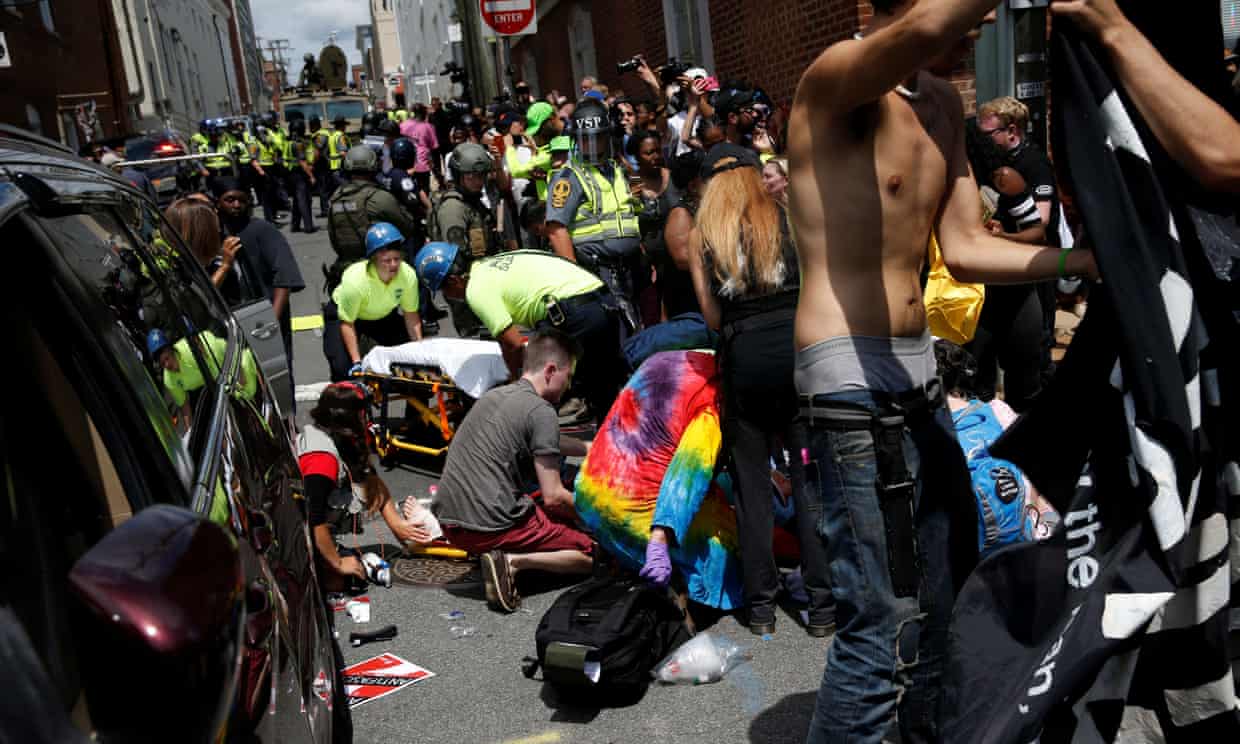 Recall that Dotard Trump referred to the killers, and other marching Nazis with Tiki torches as "some very fine people".

Trump had one primary job to do last night, just one: an unqualified condemnation of terrorist acts.  Acts designed to instill fear in people, but especially in his own critics in the 4th estate and political opposition.

But this he could not do,  instead bellowing within minutes of delivering a half -hearted objection to the bombs:

In other words, the deranged fucker wants no criticism - none!  Despite the fact the job of the press is to hold power - especially unchecked - to account. No,  this blowhard authoritarian wants no part of it, only adulation - or at least looking the other way -  while he cages infants, encourages political violence, and makes nicey with a guy who helped hoist him into the presidency.

And let's not pretend this is all just coming out now, oh no. From the 2016 dumpster fire of an election campaign we knew the nature of this walking slime.

Trump has repeatedly invited his supporters to beat up protesters at his rallies, implying that the protesters bring physical assaults on themselves by disrupting him.


Neither the fatal shootings at a newspaper in Maryland nor the killing of journalist Jamal Khashoggi in the Saudi consulate in Istanbul have discouraged this filth from blasting journalists as “enemies of the people”.


And don't think for a second the Trumpist hate doesn't creep out from rallies and rebound on those trying to do their damned jobs. For example, at a CNN forum on Monday, Maggie Haberman of the New York Times talked about her children sobbing because they are so scared for her and their own safety because of the vitriol and threats that are flung at reporters covering Trump rallies.
There's one person and one alone, who can stop this nation's spiral into civil war and even worse violence: Donald John Trump. He could have started the path to peace and civility last night by using the pipe bombs as a message to followers to truly back away from political violence. Instead he merely postured with empty, meaningless words before coming right back and attacking the press and political opponents.
As former DOJ spokesman Matt Miller put it last night:
"The problem is he doesn't have the credibility to deliver this message. So when you hear the words you know they ring hollow, and he can't stick with it because he doesn't really mean it. And we already see him turning and trying to blame this on Democrats tonight and I's sure we'll see even worse from him tomorrow."

Of that I have no doubt, because we have a human maggot in the highest office, incapable of setting any kind of judicious or civil example. He is a brat, bully and thug at heart and that will never change.