As noted in my post of Oct. 24, it was mere hours after the news broke that explosive devices had been sent to George Soros, Bill and Hillary Clinton, Barack Obama and other prominent Democrats, that  deranged conspiracy ideation  (I refuse to dignify it with the term 'theory') was spawned in certain corners of conservative media.  The bombs, according to this hogswill, were not actually part of a plot to harm Democrats, but were a “false flag” operation concocted by leftists in order to paint conservatives as violent radicals ahead of the elections next month.  As Matt Miller put it last night ('Last Word', MSNBC) "This is coming from conservative circles that this was somehow a liberal plot to distract from the caravan  which they believe is what the election ought to be about. So again, you have this idea that because they were Democratic targets it's not a national crisis, but something we can again fight over - which is obviously a really reprehensible idea."

Sound familiar? If it does you might recall it comes right out of the playbook of  über -kook Alex Jones who fabricated the false flag bunkum that the Sandy Hook/Newtown massacre was a federal "false flag" operation. Those twenty  kids weren't really slain, they were merely child actors- as well as the teachers- in an elaborate script to befuddle the public and make them demand gun confiscation across the land. (Jones was also one of the nitwits who confected the cockeyed conspiracy codswallop that the Parkland shooting victims, who became gun control activists-  were all actors.)

So no one need be a Mensa brainiac to know the template for this latest false flag conspiracy B.S. has been in existence from the Right's stooges and trolls for some time. Hence, it ought to have been of minimal surprise to learn this latest iteration shares the same deranged heritage, or "DNA" if you will. In this case, a wacko named  Jacob Wohl-   a pro-Trump twit who writes for Gateway Pundit (a Right wing troll farm)-   tweeted  the  refuse that the assorted pipe bombs were props, planted by Democratic operatives and amplified by a biased liberal media.  In other words, all a ruse to drive voters to the Dems. No, folks, you cannot make this shit up, this is real and happening in Rightist Trump World.

One is led to inquire what engenders this degenerate crap.  What defects in the brains of these losers causes them to spawn such bollocks, say instead of applying what gray matter they have to researching real conspiracies?  Well, one answer is that researching the real ones - like the JFK assassination  - actually takes hundreds of man hours of real work.  Just plowing through Oswald's CIA files - e.g. the  OS-351- 164 file from his  201- 289 248 CI/SIG file or his 74-500 file. as reported in the Appendices of  John Newman’s book, ‘Oswald and the CIA’- can take hours.   It's a damned sight more exacting than merely scribbling  an imbecilic text on 4 Chan, Reddit or Gateway Pundit.

Sadly, columnist Kevin Roose, in a recent  NY  Times piece : ' False Flag Theory on Pipe Bombs Zooms From Right-Wing Fringe to Mainstream',  appeared not to be able to distinguish this latest right wing baloney from serious conspiracy research. That is the nature of the work done by Mark Lane  - who would be called a REAL conspiracy theorist or better, conspiracy analyst.  (The analyst having often shown facts, evidence, data beyond the conjectures of theorists.)

As articulated by Dr. Pat Bannister, the conspiracy research community is the province of mature, rational, educated adults. Serious people possessing some measure of intellect who bring their scientific, mathematical and other aptitudes to the investigation of multiple aspects of a putative real conspiracies - whether the BCCI banking conspiracy, Iran-Contra or the JFK assassination. These people put in real man hours and actually published their work in authoritative media and respected forums as opposed to spreading bunkum through the lowest dreg regions of the net.

Lane, for example, was the first to expose the misdirection and artifice to do with Lee Harvey Oswald's USMC rifle test scores. This was in conjunction with the Warren Commission's questioning of Major Eugene D. Anderson in reference to Commission Exhibit No. 239.  Thus, the WC simply published Anderson's ambivalent speculations on what  weather conditions  for May 6, 1959 might have been, i.e. at first asserting "it was an ideal day".   But it was Lane who pointed out, 'Rush To Judgment', p. 124:

"Although the Commission adopted and published the major's speculation on what the weather 'might well have been'  there was no need for imprecision on this point. Whenever weather is a factor in a court case in the United States, the records of the United States Weather Bureau are subpoenaed and presented as a matter of course.  ... The Weather Bureau records show that the day was not 'windy, rainy, dark', it was sunny and bright and no rain fell."

That, I submit, is the work of a serious researcher, not a wacko like  Jacob Wohl, Michael Flynn or Alex Jones.   Alas, Mr. Roose - unable to make any critical distinction between genuine theorists-analysts like Mark Lane and ignorant poppets such as Alex Jones, Jacob Wohl et al, writes:

"Conspiratorial thinking has always been with us — the grassy knoll, the moon landing, the Freemasons. But it has been turbocharged in the Trump era..."

Thereby conflating conspiracy thinking and analysis with paranoid ideations and blatant nonsense.  This occurred as soon as he dragged in "the grassy knoll".  Following on from his book 'Rush To Judgement', Lane prepared a video with eponymous title, in which actual assassination witnesses were interviewed including: S.M. Holland, Lee Bowers, Aquilla Clemmons,  Orville Nix and others. In the case of S. M. Holland, e.g. 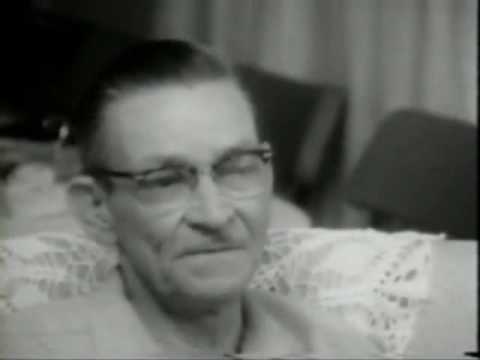 Lane escorted him to the top of the Triple Underpass overlooking Dealey Plaza to assess the full layout including the grassy knoll, and the curve of Elm Street around the Texas School Book Depository. Subsequently,  Lane actually walked with Holland  to the picket fence on the grassy knoll, clearly revealing its height would have concealed an assassin. Holland also recounted for Lane the questions never asked him by the Commission.

The interview with railroad worker Lee Bowers (later found dead in a suspicious car accident) disclosed the movement of men and a vehicle ('58 or '59 Chevy, tires covered with mud) behind the picket fence on the knoll just before the assassination.

Lane's preliminary work in many ways set the stage for the research of D.B. Thomas (published in the journal Science and Justice, Vol. 41, p. 21, 2001) which showed the putative origin of the kill shot in the assassination, traced to the grassy knoll using echo correlation analysis. This was based on the inferred geometry:

Thomas incorporated  both the original acoustic data (in dictabelt recordings) from Nov 22, 1963 and  more recent evidence from August 1978, when a test shot was fired in Dallas’ Dealey Plaza to provide a fiducial mark for the putative Grassy Knoll shot.   This integration was such that the test shot could be compared with the impulse record obtained on Nov. 22, 1963, e.g. 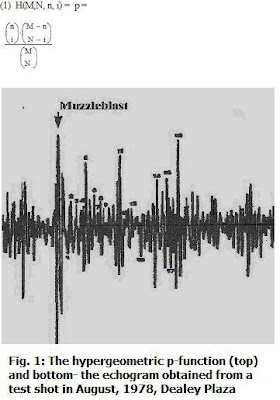 This enabled the  fiducial mark to be lined up to events recorded on the Zapruder film. Thus, the test evidence (mainly in terms of echoes and echo delay times received via an echogram from a test shot (See Fig. 1) was essentially used to confirm the microphone recording & positions for the shots made on the actual date, by resort to microphones placed at the same (or approximately so) locations.

The hypergeometric p-function was then used for differing weighting factor distribution sets, H{M..N, n, i} to assess significance or likelihood of occurrence. It's based on the number of echo  'windows'  M,  with each spanning 190msec (total time)  at 2msec width per window and n for assigned impulses in the evidence pattern, with 'i' the "coincident impulses" or those matching the original (11/22/63)evidence and the test result.

The question was whether a succession of first impulses of given amplitude could be manifesting a signal or was merely random noise. Thomas found that for a given configuration for 2 motorcycles at designated locations, 1 for (Grassy knoll) shooter location and one for alignment of muzzle blasts with one pair of echoes, the p -value is 0.000012 or about 1 in 100,000 against the null hypothesis, i.e. that the impulses were from random noise. An alternative way to put this is that the odds are 100.000 to 1 against being random noise. Hence  in favor of the impulses comprising actual rifle shots.

For the test shot, using Thomas' sonar model and the muzzle velocity for a Norma 6.5mm Mannlicher-Carcano (which is very doubtful that the GK shooter used), one arrives at a 171 msec time for the shock wave to take the defined path to the microphone, from a distance of 28.3m.  (See geometry diagram above)  One must then add the time taken for the putative bullet to travel the distance to the time for the shock wave. In this case: 126 msec + 45 msec. The first parameter is relatively fixed since the distance from bullet to test microphone is fixed at 44.2m and the speed of sound defined for the sonar model was 350 m/s.

In the “analytically determined” schema (e.g. actual data obtained on 11/22/63), all the above values change slightly. For example, the distance to Kennedy (from the GK shooter) becomes 30.5 m, and the speed of sound is 342 m/s given the air temperature was 18  C (64.4 F)  at the time of the assassination. The distance from the (GK) assassin to the nearest motorcycle was 67 m leading to the muzzle blast arriving at the motorcycle some D t = [67m/ 342 m/s] = 196 msec, after the shot. When air resistance is corrected for by + 11.5% (from the shooter location) the muzzle velocity resulting becomes 748 m/s (using a starting assumed bullet speed of 672 m/s). Because of a shooter “location uncertainty” of +/- 1.5 m (A<-> A') the muzzle velocity uncertainty is at least +/- 32m/s, so one is left with a range of: 748 +/- 32 m/s. Assuming Thomas’ parameters are correct, then this excludes a Remington Fireball as a possible candidate weapon, but it does permit either a German Mauser or a .30-30 Winchester.

The bottom line is that Thomas' investigation soundly reconfirmed the original acoustic tests and that the kill shot came from the grassy knoll.
My point in writing this post and undertaking this exercise is to show the need for more scrupulous attention to details, as opposed to recklessly and lazily employing throwaway terms like "the grassy knoll"- to conflate one of the few genuine conspiracies with current wacko ideations.  The  latter referring to the false flag idiocy spewed by the Right's parade of morons, paper patriots  and shameless knuckledraggers.

By also showing more perception, intelligence and insight, writers like Roose will command more respect, especially in being able to discern poppycock from actual events that merit close analysis and research of the type I have shown.  Writers like Roose thereby emerge as more competent and informed when they write pieces on claptrap, paranoid conspiracy ideations - such as circulated by Jacob Wohl and Alex Jones.  The takeaway for serious journalists?  Do not insert "grassy knoll"  phrases or references as a kind of cheap homage to "conspiratorial thinking"  when criticizing today's incarnations of paranoid bunkum.

And:
Here Are 5 of the Worst Far-Right and White Supremacist Terrorist Attacks of Recent Years

Posted by Copernicus at 8:40 AM