Teleprompter Trump: An Hour's Worth of "Sane" Boilerplate Balderdash 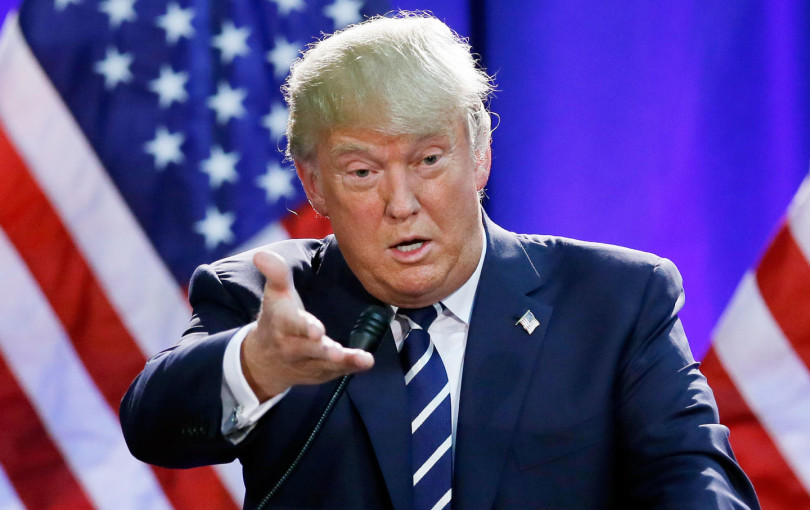 Trump during his performance last night: the snake oil salesman selling bottles of strychnine and passing them off as an elixir to a gullible audience.

"President Trump’s speech had an air of unreality because what he said tonight was so different than how he has governed in the first 40 days. He’s proposed nothing on trade or infrastructure, which might help working families; and his budget seems to cut education and medical research, which he talked about improving. The president is simply using populist rhetoric to cloak his hard right, anti-middle class agenda." Sen. Chuck Schumer

"The bad part of this is that it will fool a lot of people. If you knew nothing about Donald Trump before this and you just watched this you would say, 'oh there's a Republican president, he looks like a fairly reasonable guy'.  But what worries most of us is the personality, You can't have somebody who is diagnosable like this guy with the narcissism and all the rest and think that it's going to come out well for us. Somebody who sees things that aren't there. And we've seen that he doesn't know anything, saying the other day that he's finding out health care is difficult."  - Bill Maher on MSNBC last night


On the plus side, Trump didn't come unglued or unhinged in his speechifying last night to a joint session of congress. On the other hand that was a minimal threshold to cross and actually obscured the venomous aspect of the Trumpists' underlying policies. That was distinguished by a stilted,  fake appeal to "unity" - all belied by his actual recent actions, as well as his budget proposals.   For example, I read yesterday morning that among the cuts to be enacted - if he gets his way- are 80,000 AmeriCorps teaching assignments in disadvantaged urban and rural communities. It is like an American Peace Corps.

Worse: Under Trump’s “simplified” tax plan, millionaires would see taxes reduced by ten percent. Some families earning between $20,000 and $50,000 would pay more in taxes—for a shrinking social service infrastructure. The burden falls heaviest on lower-income workers, including the roughly 40 percent of the workforce earning less than $15 an hour. These are also the folks who stand to have their existing healthcare "repealed and replaced" with Repuke "access". (Transl You can get healthcare if you have enough $$$). On the other side of the ledger, Trump seeks a $54 billion boost for military spending, to be offset by slashing social programs. (Like Americorps and Senior Service centers)

As Chuck Schumer put it, the speech and reality have never been more detached.  Indeed, Schumer noted that when you peeled away the piffle the speech was "like the campaign." Meaning he says one thing and governs differently, or rather "pseudo -governs" For example, he talked about education and medical research but the budget he proposed will slash those things to the bare bones. Then he said he was going to "reform" Washington but his government is filled with swamp creatures including one, Wilbur Ross - who had become head of a Cyprus bank that helped Russian oligarchs launder money e.g.

In addition, while he bamboozled the assembled legislators and millions on TV, his war against the press goes on unabated as well as his war against the people of this country, including immigrants, minorities, and all those who'd be decimated by repeal of Obamacare. In this sense, Trump emulated the classic snake oil salesman handing out his favorite elixir but neglecting to the tell the buyers it is laden with strychnine and arsenic.

As exhibit A we can refer to Bernie Sanders' Twitter message after the performance:

"Perhaps most astoundingly … I did not hear President Trump say one word, not one word about the need to combat climate change … In fact, he pledged to increase our dependence on fossil fuels.
I had a difficult time not laughing out loud … on this very, very day he signed an executive order rolling back President Obama’s clean water rules."

So, as Trump was blabbering his anodyne hogswill to the peanut gallery, e.g.

"what will America look like as we reach our 250th year? What kind of country will we leave for our children? I will not allow the mistakes of recent decades past to define the course of our future."

He already knew he'd signed away that future by signing an E.O. to allow coal companies to dump their waste into rivers, and (yesterday morning) gutting the Obama update of the "Clean Water Act" ,  enabling the larger poisoning of the nation's watersheds with more poisons: lead, arsenic, perchlorates. benzene, xylene, atrazine etc. At the same time he had to know  all that contaminated water would  spawn millions more cancers (pancreatic, kidney, liver, colon, breast, prostate),  that none of the victims would be able to afford to treat. Not with their ACA subsidies replaced by tax credits and health savings accounts!

Another patch of BS that he bloviated concerned infrastructure repair:

"Crumbling infrastructure will be replaced with new roads, bridges, tunnels, airports and railways gleaming across our beautiful land."

Does Trump have any clue how much that will cost? I doubt it!  An illustration of how much spending has fallen is indicated below with a graphic image of one consequence of inattention: 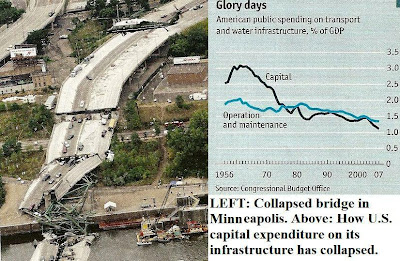 We act like essential idiots, paying more attention to the Business News crawl of the DOW's daily jumps, than to our REAL wealth - tied up in water mains, pipes. highways, bridges and sewer systems. Yet the cost of that unattended and lackadaisically maintained infrastructure is growing by the day. The American Society of Civil Engineers already estimates a cost of over $2 trillion to attain a stage of basic repair.

WHERE is Trump going to get that kind of money, given he won't even raise the revenue via taxes to do it - and cuts can't make it given all the other stuff he's promised? WHERE do we get that $2 trillion to begin maintaining our infrastructure?  As long ago as 2011, The Economist   ('Life in the Slow Lane', April 30, p. 29)  proposed introducing a "fuel tax rate increase"(currently at 18.4 c a gallon) but also noted that "these are even more unpopular than deficits".  But this is exactly what Trump would need to do, or have congress enact,

Instead, his actual plan entails a "private-public" cooperation but with private sharks grabbing most of the money (e.g. 82 cents of every dollar going to financiers, banks). In addition, Trump's plan requires drivers to pay high tolls, far greater than the fuel tax advanced by The Economist.

But merely to blab away about replacing crumbling infrastructure with "new roads, tunnels, airports and railways gleaming across our beautiful land." is nothing. Anybody can talk and promise the Moon. Talk is cheap, but people have to be intelligent enough to know when "bullshit walks" . The fact Trump didn't "lose it" already has many in the media believing that we have a real President after all because he didn't erupt in a psychotic meltdown. But they miss the point that he shouldn't be doing that ANYWAY!  Again, a low bar and low expectations - such that reading vacuous baloney from a teleprompter has idiots comparing him to JFK with his American University speech, e.g. "one people who bleed the same blood", compared to JFK's "we are one people on one planet who all breathe the same air". The difference being that JFK referred to all the peoples of the planet, not one people in one nation.

Another cynical play concerned invoking as his personal, grandstanding prop the widow of an American soldier, Ryan Owens, killed after being sent on an ill-conceived mission to Yemen.    (The whole mission itself  dreamed up at one dinner date with Bannon and son-in-law Jared Kushner, as Michael Moore noted last night:).  But for Trump in his consummate narcissistic bubble it was all about the applause meter. Grotesque!  There was Trump playing on the patriotism and sense of honor of those assembled to accrue more brownie points for his malignant ego.

"I wish she hadn't allowed herself to be used as his prop like that. I don't see any great courage here. Where's the courage?  Who wouldn't stand and applaud for a war widow? It's all very well and good to elect this guy who's going to be the bull in the china shop until people realize the china being broken is your china. You losing your health care. Your coal job not coming back."

Maher went on to note it's all "fun and games when you're out on the campaign trail" and rousing your base and the hate radio kind of stuff but now it's actually happening and people are being hurt. Families being separated, rivers polluted.  Again, emphasizing the disconnect between the rhetoric and reality.  Like the disconnect between the smooth spiel of a psychopath like Ted Bundy, and his actual deeds.

I still recall after Bundy was finally apprehended in Florida after his vicious sorority house murders at FSU, my friend Rick  (a psychologist) telling me: "The most brutal murders, especially of women, have been done by soft spoken, smooth talking psychopaths, like Ted Bundy."

Now, of course, we have a soft speaking (at least this time) malignant psychopath ready to murder our own country. But is anyone paying attention? Or will they now allow this pseudo-speech, a travesty if ever there was one, to lull them into a sense of false complacency?

Don't believe for a second that because Trump exercised a bit of restraint last night that he's sane. NO he is not. Even a psychotic - once he has his thorazine and a few shocks of ECT - can appear lucid and sane for an hour or so.  The mistake of too many women who crossed paths with Ted Bundy was they took his practiced normality signals as indicating he was safe to be with. They paid with their lives.  Our job is not to let Trump pull a Ted Bundy on all of us. Our duty is to resist until we are no longer able to do so. This loathsome maggot and his attendant parasites must not be allowed to prevail.

"Old habits and impaired thinking lead to a suboptimal outcome.

In the age of President Donald Trump, too many members of the American news media have acted like the drunk searching for his or her keys under the streetlight. They are looking for answers in all the wrong places.  Here are several examples drawn from the tour de force of lying and deception that Trump performed on Tuesday."
And:

“They really want to blow this place up,” a mid-level State Department officer told The Atlantic. “I don’t think this administration thinks the State Department needs to exist. They think Jared can do everything. It’s reminiscent of the developing countries where I’ve served. The family rules everything, and the Ministry of Foreign Affairs knows nothing.”