The Cold, Hard Truth: It's Game Over For Bernie 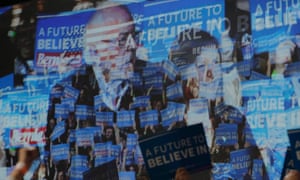 There comes a time when the most pie-eyed optimist must face reality and concede the battle is lost, and even the war. Since I am not,  nor ever have been an optimist, I have no problem now calling a spade a spade and acknowledging it is game over for Bernie Sanders.  He fought a valiant, uphill battle for the American left - even when its darling (Elizabeth Warren) refused to run - or even endorse him (opting to remain neutral)  But it was  insufficient to conquer the well-oiled Clinton Machine. Not only that, but he had to go against that machine plus the DNC's rigged system of superdelegates. A shadow system in which lobbyists and party bosses could trump the will of actual voters.

This   hidden system alone, which had ratcheted up over 582 total delegates even before Super Tuesday commenced (after Hillary's SC win)  meant that to keep pace Bernie would have had to have taken at least 9 of the 11 states in play, including the biggest - Texas- as well as his neighbor state, Vermont.

But this he could not do, winning only four states (VT, CO, OK and MN),  and thereby falling so far behind that it is now impossible to catch up - given Hillary's delegate lead- to even compete in a realistic way. Though some might be deluded at what appeared to be about a couple hundred delegate count difference after last night, the actual count (with superdelegates),  is Hillary 1033 and Bernie 387.

Yes, with a $40m haul from February, Sanders can technically battle on until the convention, but it is a total losing wicket and only spells more humiliation as more and more state super delegates follow suit and tilt to Hillary as "Savior" from "the Donald". In Colorado, for example, despite Sanders carrying 51 of 64 counties and winning overall by 19 percent over Hillary, she will likely end up with two more delegates, 40-38.

It is clear from the way this has turned out that Americans, Democrats in particular, are not prepared to give up Neoliberalism and its version of rigged capitalism-  despite the fact it hasn't delivered duck squat to them. Polls also show they are not as angry as Republican voters, but they should be -given how they've been tricked so often.  They are, in turn, the ultimate suckers - especially African-Americans -   who've tilted to HRC in such absurd proportions. (See previous post)

But this was all predictable as the campaign carried on,  with the neolib pundit class interjecting and sowing its doubts on Sanders (including multiple utterances of the s-word)  at every turn despite my skewering them one after the other. At some point, like it or not, the negative PR began to stick as well as the gender card played with good effect by Hillary and her surrogates.

The biggest disappointment for me was Elizabeth Warren - who might have helped enormously in the struggle - but didn't even have the courage to endorse Bernie, despite the fact he sounded the same notes that she had always embraced. That she wouldn't run because of believing she might wield more effective influence in the Senate was one thing, but not to even endorse him was plain cowardice in the service of crass political calculation. (That she'd be less damaged if she kept her mouth shut).

But bravo to Rep. Tulsi Gabbard of Hawaii who had such courage of her convictions that she left the compromised DNC and came out foursquare for Sanders. She had to leave the DNC in order to escape the shadow of Debbie Wasserman  Schultz (a Hillary surrogate) and do that.

It is clear to this Sanders supporter that Americans simply lack the courage and conviction to change the system they have. Given that, they are in no position to complain about it as it screws them over and over and over again with more bailouts of banks, more corporate mischief (including the TPP), more invasions and occupations and ever higher health care/drug costs and exploding student debt.

If you as a serious voter lack the balls (or conscience)  to change the system - out of fear - then  you lack any claim or basis to complain about it, especially if you approve of those committed to preserving the status quo. Clearly, Trump supporters-voters are determined to change the system however they can, probably in a bad way. (Tom Brokaw said last night on NBC they will 'sadly learn Trump is not a dictator in our system of dispersed power''). But the Dems who settled for Hillary out of a sense of false security and complacency will now have to try to ensure the Trump nightmare -  spawned by a misplaced demand for change- doesn't overtake their own aspirations, e.g. of "the first woman president". Enough said!


Thanks for not really paying attention and for misunderstanding pretty much everything and for voting out of fear and incoherent emotion, and for permitting and enabling an engineered, anti-democratic political system.