SCOTUS Nominee Merrick Garland Is The Best Deal The Reepos Will Get - And They Should Take It! 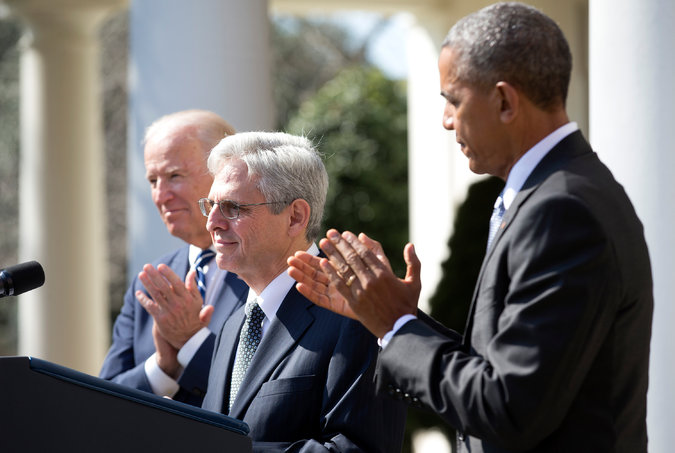 Taking a page directly out of the script for 'The Godfather' ("We'll make 'em an offer they can't refuse') Barack Obama called the obstructionist Repukes' bluff yesterday by nominating moderate Merrick Gardner to the Supreme Court.  While some in the corporate MSM referred to him as a "moderate liberal" he is nothing of the sort.  In his 19 years on the bench, Judge Garland has established a solidly centrist voting record that reflects no strong political ideology. He has sided with the government in cases involving habeas corpus petitions from detainees at Guantánamo Bay, and has voted against criminal defendants more often than his liberal colleagues.

In any kind of sane universe and nation, the repubs would be jumping for joy that they'd gotten Obama to come to their side more than they'd ever believed. Hell, his pick even had most of the liberal blogosphere in an uproar yesterday - but they need to get over it and appreciate Obama's chess move.

Obama is basically calling the Reeptards out for being the obstructionists they are, and forcing them to adhere to the Constitution, which stipulates the Senate shall give its "advise and consent" following a SC nomination. Even someone like Scalia - a strict constructionist - would interpret that in the active sense (i.e. of actually holding hearings ) and not the passive aggressive sense of "deny and obstruct".

Because if you deny hearings at all, like the SOB Mitch McConnell is advocating, then you're merely acting the part of a constitutional fraud who mouths the words of respect for it but doesn't really believe in them. Thus, it was choice seeing this asshole squirm soon after the announcement and again interject the red herring that "we need the people to choose". Totally oblivious to the fact they already have, when they elected Barack Obama in 2012 by 5 m votes over Mitt Romney. Last I checked, Obama's term is still in effect with over 300 days left in it, so his nomination of Garland means he is doing the people's will. The ones who elected him in 2012. For McConnell to disregard or disrespect that is to spit on the will of the voters that he now appeals to.

In the midst of all the kerfuffle erupting we also heard Sen. Orrin Hatch being asked why - if he supported Garland before  - he wouldn't do so now. He came up with the lame excuse that "times are different" because we are in the midst of an overheated, politically polarized climate and an election. So what? You're going to hold up hearings because of that? That's a bloody cop out which would leave the highest court without a deciding member for over a year.

More to the point, Hatch, who sits on the Judiciary Committee, insisted in 2010 said Mr. Garland would be a “consensus nominee” and said there would be “no question” that he would be confirmed to the Supreme Court with bipartisan support.


As recently as last week, Hatch repeated his praise, saying that if Mr. Obama wanted a real moderate, he “could easily” name Mr. Garland, but predicted that “he probably won’t do that because this appointment is about the election.” So now Obama has called Hatch's bluff and what does Orrin do? He tries to weasel out of his recent supporting proclamations.

Clearly,, the pukes are gambling that they can win the 2016 election and put their own guy in, but that is a big gamble. To show how much nerve they really have some actually offered that if it turns out that Hillary wins in November, they WILL allow Garland as a Lame duck pick. Oh gracious me, really! Of course they would allow him then because they'd shudder to consider a really liberal  HRC pick in January, 2017! So they're just trying to hedge their bets.

But it won't work! Even the WSJ in a piece 2 weeks ago ('Some Republicans May Suffer For High Court Line') noted up to five Reepo senators  - including Kelly Ayotte (NH) and Ron Johnson (WI) could lose their Senate seats to Dems if the Repub intransigence pisses off state voters who disdain the optics. The same piece noted a Quinnipiac poll at the time showing 56 percent of Americans "believe the Senate should hold hearings and vote on Mr. Obama's Supreme Court nominee."

And this was even BEFORE there was an Obama nominee! What exactly do you really think good ol' Mitch and his boys will do when new polls come out - after seeing this moderate nominee- and they show 70 percent or more are demanding hearings? I promise you the Reeps will change their minds faster than that movie producer in The Godfather did when he awoke with the severed horse's head in his bed (after initially refusing to put the Don's godson in a movie).

See, in the limited realm of reality, Obama knows  - and the Reeps too - that this is the best  deal they will get. They needn't confront a firebrand liberal in confirmation hearings, but a steadfast moderate who already proved his law and order mettle by pursuing and ending the Oklahoma City bombing case.

If they don't take it, and they lose in November -  a huge possibility given how many female voters especially are cringing from Trump's theatrics - as displayed on Chris Hayes' All In last night, they could be plausibly facing a real liberal nominated by HRC, and then - given all the time they would have already wasted (and the public mood growing ever more impatient) they will have no place to run or hide and no more lame excuses like the 'Strom Thurmond' rule or the "Biden rule". (Biden clarified that irrespective of his opinionating (it was not a "rule")  in 1992 the Dem Senate never refused to even hear or vote up or down on a Reep nominee.)

If the Republicans have any political sense at all, and actually like maximizing their odds, they will take this deal and not look back, or pander to their extremist base. Because in the end it will be the best deal on offer- and the best they will get this year or next.  Now, the jig is up - or soon  will be - so  Senate Republicans must stop stonewalling and give this widely respected federal judge an up-or-down vote.

http://www.smirkingchimp.com/thread/robert-reich/66483/tell-your-senators-to-do-their-job
Posted by Copernicus at 8:12 AM