Did Obama Diss Bernie In A Recent Speech? It Seems So! 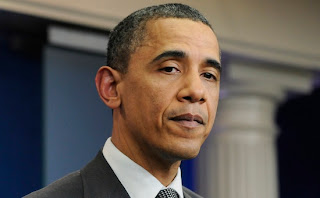 Even as parts of the 'librul media' now claim Bernie Sanders is running a "con" (cf. Rachel Maddow Friday night) or "pandering" (Elizabeth King on salon.com) in getting younger citizens to buy into his concept of a political revolution, it appears the Prez is bearing down on Bernie too.  In her recent WaPo column, Ruth Marcus claimed that Obama - the day after the NH primary- delivered a speech in which he "lamented the poisonous political climate"  and mourned that "the tone of our politics hasn't gotten better since I was inaugurated, in fact it's gotten worse".

Well, duh! What would you have expected from hardcore Repukes who actually vowed (like Mitch McConnell in 2009) that their numero uno goal was to block Obama's plans at every turn?  And even Obama later conceded that obstruction by having to resort to a number of executive actions on a host of matters from immigration to the environment. So don't act so damned surprised, Mister Prez!  And also, if I may add, it took you way too damned long to admit what these rat fuckers were doing - to the point you actually tried to appease the bastards with Social Security cuts - via your now (thankfully)  defunct "Debt commission".

But I digress. The main thrust of Marcus' column was that Obama had a chief bone to pick with Sanders. Marcus wrote that "some correctly interpreted Obama as criticizing Trump" but "the more interesting aspect of Obama's speech was its implicit disagreement with Bernie Sanders - the previous day's winner."

She even went so far as to insist Obama's speech (which she admits was "bumped off the front pages and most media") "can be interpreted as a rebuttal to Sanders and a rebuke of the Vermont Senator's approach to politics and an unstated endorsement of Hillary Clinton's plodding pragmatism". Which  latter I already wrote about and took to task as essentially useless, e.g.

"After all, if as Obama and Hillary demand,  health care be kept a business (since insurers are part of the mix) then profits will be incorporated. The profit expectations will also be continuously  increased so higher and higher premiums must be expected"

In other words, without calling out the term, I deliberately identified both Obama and Clinton as Neoliberals - which they are. Also known in Left parlance as "DINOS" or corporate democrats.  But again, I get ahead of  myself.

The point here is that no one with good sense ought to express surprise that a Neoliberal would "rebuke" the Bern. Hell, his whole legacy and identity depends upon it. And lest some forget, let's remind them of one of Obama's biggest, proudest Neolib badges, defending the TPP against fellow Dems, e.g.

While we're at it, David Bromwich (at salon.com),   in an article Obama’s Disappearing Act- What Happened to the President He wanted to be?  put it in great context - much better than Marcus as to why he wouldn't have the courage to back a real Dem like Sanders:

Perhaps the thin connection between Obama’s words and his actions does not support the use of the word “conviction” at all. Let us say instead that he mistook his preferences for convictions — and he can still be trusted to tell us what he would prefer to do. “

Leading Bromwich to then revive the term "leading from behind". Waiting and waiting until a popular furor builds up and catapults the issue before embracing it. Marcus herself endorses this perception noting Obama's "ingrained tropism" (tropism being a feature of plants) to "move toward middle ground".

Sure, JFK would have ‘preferred’ also such lackluster behavior, e.g. so as not to face down U.S. Steel and earn the wrath of the corporatocracy, but he knew he had to do it for the welfare of the nation. Hence, he threatened that corporation with removing its defense contracts unless it complied and didn’t raise steel prices in the spring of 1962.  Similarly, Kennedy would have ‘preferred’ not to have to confront his Joint Chiefs over their intent to bomb and invade during the Cuban missile crisis, but he did so because he realized the preservation of life on Earth may well depend on it.

Well, Bernie is THAT mold of President! One we haven't seen in the White House for over 53 years.

But what really annoyed the hell out of me is that Obama's middle ground "tropism" arose from Bernie's "call for political upheaval". Jeezus Peace, you'd think the woman was portraying a call to firebomb buildings, take over the Army bases and oust the high roller CEOs and banksters from their plush offices.

At no point did it sink into her thick cranium that when he calls for "political revolution" he doesn't mean it in a literal sense, say like the Marxist-Leninists did with the 1917 Russian Revolution! He meant it in the sense of a collective revolution in consciousness - much like author Charles Reich once proposed in his marvelous book, 'The Greening of America'.   The first step, as Reich notes, is hurling off the yoke of false consciousness - that infection of mind which leads us to only see reality through the lens of the System. Hence, leading us to accept such travesties as an economically rigged economy, a rigged banking system and a hopelessly defunct healthcare dinosaur.

Thus,  Sanders is correct when he avers that any real change must be stoked by the people - this after they doff the false conscious cocoons.  THEY must incite their reps to act on their behalf and do the right thing to make the system work for them and not against them. In this sense, it is true that Sanders (as he himself admits) is "no magician".  At the top of the list we have to override the mainstream media in its lies about Sanders' proposals - making them appear as if they're mere flights of fancy - say like constructing a gigantic space ship to go to Proxima Centauri.

Lastly, even as Obama was reciting his pabulum about uniting red and blue America" (which will NEVER happen!)  Marcus was bloviating how Sanders's depictions were too "dark" in terms of the business model of Wall Street being a fraud, the economy being rigged, and the billionaire class purchasing a "choke hold" on Washington. Hmmm.....methinks I need to send her a copy of my book, 'The Elements of the Corporatocracy'.

Anyway, even as she and Obama were blabbering their Neolib nonsense, the news from the February 12 Wall Street Journal was headlined: "A Warning Signal Flashes' (p. C4), the article noting how the market for credit default swaps - the same buggers that nearly crashed our financial system in '08 - are now on the rise again.  According to the Journal (ibid.):

"At the end of June the global CDS market was $14.6 trillion as measured by the total amount of default protection outstanding according to the Bank for International Settlements"

This is serious but confronting growing CDS toxic crap and also avoiding another massive bank bailout, depends on level-headed realists who see our craven, rigged system for what it is. Not on Neolib cheerleaders who value their legacies more than the truth! So Marcus can yap all she wants that we ought to follow Obama in his Kumbaya -unity themes and not Sanders "by manning the barricades". But if this CDS racket is on track to explode again, I believe we need the latter, and Bernie need make no apologies for his anti-establishment positions - nor should those of us who support him.

"Here's the list of issues I heard Bernie Sanders address at the Denver Convention Center on Saturday night: crumbling infrastructure, climate change, youth unemployment, mass incarceration, Medicare for all healthcare, campaign finance reform, tuition-free public education grades K-16, Social Security, poverty, income inequality, income equity, a woman's right to control her own body, and more. Was there one single thread running through his firebrand speech? Of course. And that single thread is the tie that binds people to Bernie's campaign."

Posted by Copernicus at 2:17 PM