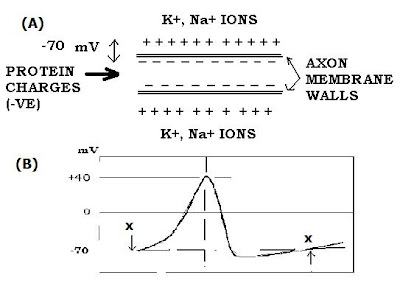 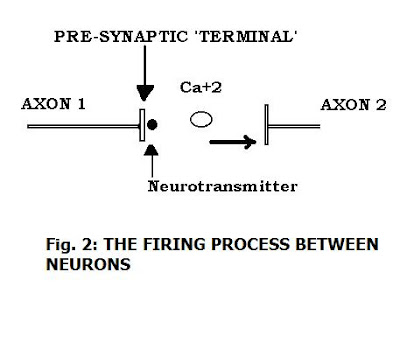 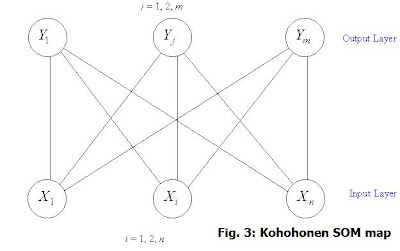 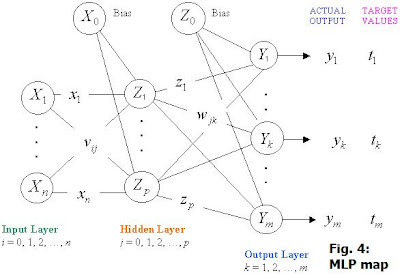 In this instalment we examine how we might use specialized processing, say via quantum dot interfaces at specific brain (neuron-synapse) sites, to correct the brain's endemic defects. To begin, we examine the scope and scale of the problem - which the accompanying diagram (Fig. 1) can be used to fix ideas.

We are looking at an electro-chemical signal (action potentials in (B) ) which are conveyed to the receptor neurons in the region of the amygdala. The waveform really represents changes in permeability, we note that when an axon is in its resting state it maintains a constant potential difference, or ‘resting membrane potential’ of –70 mV. When it is excited, it rises to a peak voltage of around 40 mV. This is sketched as the wave pulse peak in (B) with the ‘baseline’ value of (-70 mV) included for reference.

The latter basically arises from an uneven distribution of K+ (potassium) and Na+ (sodium) ions across the axon cell membrane relative to a collection of negatively charged protein molecules inside the cells. The small section of axon cross-section (A) depicts this.

One could say that (A) portrays the axon segment shown in a kind of equilibrium condition. Clearly, this can change if the ions outside the membrane walls can somehow filter through. In that case, the potential difference is bound to change. Indeed, if neurons are stimulated – say by an electric shock from implants, an electronic monitoring device will show the 40 mV ‘action potentials’ on the traces. An interesting phenomenon associated with this, is that no matter the size of the stimulus applied, the action potential peak remains the same.

What this shows is that even an appliance, device or artificial neural network (to "train the brain's receptors") placed in the immediate pathway will not stop the signal propagation. Like solar x-rays that can incept total communication blackouts, a way or mode must be found to short circuit the whole transfer process.

Note further that each pulse peak for the action potential coincides with a polarization change in the axon. Thus, as the pulse moves to a given site on the axon, Na+ ions move into the axon. Though technically both potassium and sodium ions are involved, there is actually a preferential bias. This bias is what we'll need to exploit in creating an adequate neural network to regulate the reception of impulses. This particular bias inheres in a preferential transferrence of Na+ ions through the axon membrane by a ratio that varies from 3:1 to 3:2 relative to K+ ions.

Thus, one way to engender a short circuit would be to alter the bias by altering the ion concentration at the axon membrane, say to 1:1.

The synapses also have a role, of course, specifically the synaptic cleft. As I noted above, action potentials are constantly generated in an ‘all or nothing’ kind of way, and their endpoint is the synaptic cleft of the neuron. But here is where the ‘buck’ or rather the pulse, stops. Because as the axon has no choice in propagating the action potential, the neuron on the opposite side of the synapse (the post-synaptic cell) does have a choice of whether to fire or not fire when the potential arrives. If post synaptic neurons fired predictably with arrival of each and every action potential they’d be totally deterministic.

And boring. The fact that they need not fire, indicates a high degree of probability factored into the process. This process is depicted in Fig. 2 in simplified view, based on treating the axons as simple electrical ‘cables’ and the ends as ‘terminals’. This is perhaps the essential modus operandi for the brain acting as self-programmable von Neumann machine, particularly since quantum mechanics can easily be factored in.

In the diagram, we focus on Axon 1 and note that when the action potential arrives at the terminal it’s depolarized. This depolarization enables Calcium ions (Ca+2) already within the terminal to diffuse out into the mediating space. These ions follow a concentration gradient, unlike the case of the Na+ ions in the sodium pump. As the ions migrate, then diffuse to the post-synaptic cell (at Axon 2), they leave a channel in their wake that allows quantal releases of neurotransmitter (shown as a solid dot). These, like the Ca+2 ions diffuse across to the post-synaptic cell(s).

One neurotransmitter is acetylcholine. If the transmission of this or any similar chemical is rapid firing will occur, if not it won’t. Note also that Axon 2 must have a way of eliminating neurotransmitters almost as soon as they arrive. For acetylcholine, the enzyme cholinesterase acts to break it down into choline and acetate. In these inactive forms the neuron is spared being in a state of maximal and continuous excitation that would otherwise destroy it.

Generalizing the electrical cable analogy, the synapses act as switches in the system, the ‘on’ or ‘off’ positions denoted by information, in the form of chemical messages, to cross the synaptic cleft and trigger firing of the post-synaptic neuron(s) or not. Most probably there are bundles of similar neurons linked together by their respective connections, to perform critical functions. One might refer to the neuronal super-assembly or 'super-circuit’ within which considerations such as networks, and optimization of paths as well as 'adjacency and order' take precedence. Again, this is almost absurdly oversimplified since there really are no neurons that have only one connection to another. Indeed, we expect the typical neuron to have something like 10,000 connections to others.

I begin by considering two possible networks: The Kohonen SOM (Self-Organizing Map) in Fig. 3 and the Multi-Layer Perceptron Network (Fig. 4). In the case of the first, iinitial trials (using operational amplifier proxies) quickly disclose it is too oversimplified. For example, it's applicable only to a single layer but the brain region under scrutiny is multi-layered. In addition, each "grid" neuron is an output neuron only. In real life, one must have both input and output neurons.

As the Kohonen (SOM) is implemented, each input pattern gives rise to a localized region of activity in the feature map against a background of lower activity.(For example, the activity may be registered as relative voltages, and these in turn may signify the ratio of Na+ ions to K+ ions). Once the Kohonen SOM is entrained, the aggregation of the input pattern should cause a localized group of neurons to be active. However, the activity will almost surely not be what is desirable, because the simplicity of the map doesn't allow us to make drastic changes to the configuration of action potential thresholds. We conclude that the Kohohonen SOM cannot be a useful device to achieve what we want.
Now, consider Figure 4 for the Multi-Layer Perceptron Network, can it do what we need it to? While still relatively simply (single hidden layer) it does offer the potential of more realism and attaining the goal. In particular, by contrast to the Kohonen SOM, here are n neurons in the input layer, p neurons in the hidden layer, and m neurons in the output layer. Note we also have embedded "bias" points (X(0), Z(0)) wherein ion ratios can be altered to perhaps 1:1. This means there is the potential to embed a quantum dot device to alter the output, and most likely this will be a quantum gate device using a Pauli spin operator.
Pauli spin operators are based on Pauli spin matrices, viz.: σ(x) = (0,1¦1,0); σ(y) = (0,-i¦i, 0); and σ(z) = (1, 0¦0, -1). (Note each left pair is a matrix 'top' and each right pair a matrix 'bottom' - since they are usually written in a rectangular array form. It can easily be shown using basic matrix multiplication, that some input say (0,1) can be inverted as an output, e.g. to (0, -1) (just what we'd need to shut down an electro-chemical signal) if it is multipled by the Pauli spin matrix, σ(z) . In other words, the quantum dot gate incorporates this specific operational property of the spin matrix, to iinvert an incoming voltage or action potential wave form.
WHERE to locate it? There are two plausible locations in the hidden layer interface: Z(1) and Z(p). At each respective location then let quantum dot gates using σ(z)(I) (where I denotes a designated input, e.g. (0,1)), be operative to plausibly invert the incoming signal - directly for the bias at X(0) and indirectly for Z(0). Of course, numerically, this must happen for billions of neuron inputs in the amygdala sub-complex. Is this feasible?

Next: The Results of the MLP Mapping Network from a numerical experiment.