Is It Time to Put Rover on the Menu? 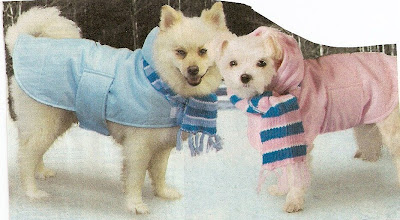 Dressed doggies: Time to put 'em on the Menu?

Burn off fur over hot fire, then carefully remove the skin while still warm and set aside for later (can be used in other recipes).

Marinade meat in mixture of vinegar, peppercorn, salt and garlic for 2 hours.

Fry meat in oil using large wok over an open fire, then add onions and chopped pineapple and saute until tender.

Cover and simmer over warm coals until meat is tender.


Source: 'Let Them Eat Dog: A Modest Proposal for Tossing Fido in the Oven': by Jonathan Safran Foer, in The Wall Street Journal, Weekend Journal, page A-10.

For any readers whose brain has by now gone into meltdown mode and whose eyes are bulging wildly with terror (as they clutch little Roscoe, Barney, Lassie or Rebel to their bosoms) rest easy. There is little chance of dog getting on any American menus anytime soon. The cultural milieu that regards dogs as companions, friends and more ...wouldn't allow it. At the same time it would be erroneous to conclude that Foer's piece was "tongue in cheek", it wasn't.

In a world starving for protein, Foer makes an excellent case to incorporate canines into the menu and not look back. His reasoning is as cold, calculated and rational as most of the investment articles on ETFs and hedge funds that appear in the Journal.

First and foremost, unless you are a vegetarian who never touches beef, you are already consuming someone's Rover or Fido, at least in a second hand mode. Consider: some two and a half million doggies on the loose eventually end up at the Pound, and 90% of these are euthanized annually. Ever wonder where they end up?

Ever watch the flick 'The Misfits', starring Clark Gable and Marilyn Monroe? The gist of it was a clique of cowpokes head off to Nevada to rustle up wild horses to be dispatched (for $$$) to a rendering plant....as dog food! (Marilyn's role- in her character- is to cry and whimper and otherwise try to set all the wild horsies free).

That was 1962. Now, fast forward some 35 years. The remains of millions of Rovers, as well as abandoned kitties, are being rendered in massive plants each year. The remains then end up in enormous cattle feedlots and mixed in with a mishmash of millions of tons of unnameable stuff and fed to the cattle. (See the film, Fast Food Nation, if you haven't yet)

When you consume the cattle - unless you know they are free range, and forage on plain old grains, you are eating those remains!

Foer's argument is 'why not just remove the middle men'? Why not just eat the overpopulated, abandoned (soon to be rendered) dogs and done? As Foer puts it:

"This need not challenge our civility. We won't make them suffer any more than necessary...we can all agree that if we are going to eat them, we should kill them quickly and painlessly, right? "

Foer then continues, tying the purpose to ecology on a planetary scale:

"Few people sufficiently appreciate the colossal task of feeding a world of billions of omnivores who demand meat with their potatoes. The inefficient use of dogs- conveniently already in areas of high human population should make any good ecologist blush. One could argue that the various 'humane' groups are the worst hypocrites, spending enormous amounts of money and energy in a futile attempt to reduce the number of unwanted dogs while at the same time propagating the no dog-for-dinner taboo'"

As a former Humane Society member, I recall shelling out hundreds of bucks in donations to save stray dogs, only to find out later that the Humane Society did more euthanizations than dog giveaways. That was emphatically not what my money was for. It was to find HOMES for abandoned canines, not eliminate them!

Like it or not, most of the world is in a protein crisis as much as a water crisis. Protein is still essential to proper brain development but in places like Haiti and Niger is conspicuous by its absence. At the same time, feral dogs are all over the place. Instead of malnourished kids in Haiti having to eat "mud cakes" - prepared by heating local moist mud over an open stove and flavoring it with sugar, why not cook the available dogs up and distribute the cooked meat? American temperaments no doubt rebel at the concept, but as Foer notes, that is totally a cultural emotional reaction, brought on by our peculiar habit to prefer canines as companions rather than edibles.

Why do we cook our pigs up and convert them into bacon, wieners, roasts and chops, and leave our dogs as privileged companions? (Some idiot 'Muricans even going to the extreme of taking dogs to get outfitted in clothing, or having dog birthday parties) In numerous rigorous tests, for example, pigs have been found to be just as intelligent as dogs. Pigs are the closest relatives in terms of their value in human experiments, and pig tissues- even hearts- have sometimes substituted for human. Yet we put them in vast slaughter houses, then butcher then and eat them. As George Orwell once opined (in his great novel, Animal House): "All animals are equal but some are more equal than others".

Now think of how Swine Flu began. It started in a vast factory pig farm in Mexico. Most E Coli cases have originated in huge industrial factories, wherein the cattle are carelessly butchered, as portrayed in 'Fast Food Nation'. Thus, Foer's final point that:

"There is an abundance of reasons to say no to factory-farmed meat: It is the No. 1 cause of global warming, it systematicallu forces tens of billions of animals to suffer in ways that would be illegal if they were dogs."


All of this perhaps is reason enough to agree with Foer when he says: "Dogs are practically begging to be eaten".

Which is to say, I will pass on it, thank you very much. But I won't look down my nose at anyone who is averse to factory farmed meats raised in their filth in slaughterhouses, and who opts to barbecue their Rover- rather than put him down at the local Pound..... for their neighbors to consume with that next cheese burger.