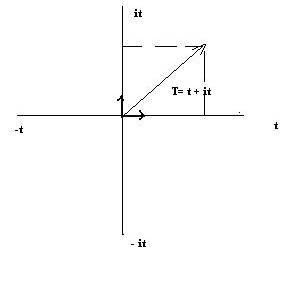 The relationship between imaginary (it) and proper time (based on description given in 'A Brief History of Time' by Stephen Hawking).

Does Anders Branderuds know anything? Or is he merely another hyper-religious apologist pretender - like the ID’ers and creationists- who use the lexicon of science, but have no clue as to what they are talking about. The most recent example of massive ignorance appeared in his blog regarding time, wherein he conflates operational time (as a definition, and dimension) with time in its most fundamental sense.

Time is a physical unit (see the derivation for this fact here):

Everyone knows time is a physical unit, but that doesn’t exhaust its meaning or the extent of its usage. It is also a dimension, referenced to space-time (not “timespace” as Anders puts it), and it is conceivable that “time” as an objective property doesn’t even exist.

For example, the late physicist David Bohm, in his Stochastic Interpretation of QM (developed at a more or less popular level in his monograph, ‘Wholeness and the Implicate Order’) made the case that given quantum nonlocality (instantaneous connections demonstrated by the Aspect experiments) “time” doesn’t exist as a unit of reference or singular property. After all, if two events (say the inverse polarizations of photons, or the inverse spins of electrons) are instantaneously connected- then no time exists for any signal transit. In this case, time as a recognizable property ceases to be.

Bohm invoked a higher- dimensionality cosmos to build upon this theme, for example, positing that mass-energy and space-time are melded in at least a five dimensional entity. (Op. cit., p. 186, ‘Quantum Theory as an Indication of a Multi-dimensional Implicate Order’) What we perceive as instantaneous connections are really manifestations of that higher dimensionality.

Moreoever, the fact that Bell’s theorem shows that NO local hidden variables theory can be correct, means that NO local description of nature can be correct, only non-local. (‘The Arrow of Time and Quantum Mechanics’ by Thomas Gold). Since local descriptions of nature are founded on local measurements of time, this means that such measurements are inadequate.

Other physicists, e.g. Robert Nadeau, Meno Kafatos et al, have correctly observed that since time itself is susceptible to certain formulations of the Heisenberg Uncertainty Principle (e.g. its energy-time presentation) then time itself is uncertain, and if uncertain, no defined units or dimensions can be assigned. This also means time is elastic. It can bend, expand or contract, and even do so under the influence of consciousness. (See, ‘Conscious Mind in the Physical World’, by Euan Squires)

But the variable nature of time, and the fact it can’t be registered as an absolute was already known from special relativity. For example, for a person moving at 60% of the speed of light in a spacecraft, his clock time registers much more slowly in reference to a stationary Earth observer. For example, if four years were recorded for the Terran observer, only 3.2 years would be recorded for the astronaut travelling at 0.6c. At a speed of 0.95c, only 1.25 years would elapse for the traveler while the full four years would go by on Earth. (Anyone can verify these results by recourse to the well known time dilation equations for special relativity, available in any General Physics college text, or by googling).

Thus, despite having the exact same clocks, measuring seconds, minutes, hours etc. in the same way- the two observers (stationary and traveling at some w x(c) value, record differing time intervals. From this it is evident that Anders’ definition of time as a “unit” is over-simplified to say the least.

More astounding, as physicist Squires points out (op. cit., p. 126), the assumed time reversal invariance of quantum theory depends on the construction of the Hamiltionian, H being a REAL function. (For those unaware, a “Hamiltonian” defines a relation between the kinetic (T), potential (V) and total energy (H) of a system, such that H = T + V. One can also obtain the “Lagrangian” which is L = T – V)

However, as he points out (ibid.) there are certain interactions which have a small imaginary part, and which give rise to small effects such as the decays of K-mesons. In these decays, causality propositions or assumptions are violated.

More prosaically, from Maxwell’s theory, we are fully enabled to make use of what are called “advanced potentials” defined in terms of:

And the f1, f2 are functions of the electric potential and vector potential,respectively.

In the advanced time, we ascertain conditions for the future potentials based on the past, and are able to use them in appropriate calculations in the future. An evident violation of causality, though admittedly the sort of applications where these may be used are limited (see previous links to Cramer’s offer and echo waves wherein the latter bear some similarity to advanced potentials and Cramer has devised experiments to detect them)

Anders’ quaint time conceptions are also impoverished and limited. He surely doesn’t take into account the different temporal models, definitions available historically. For example, in something called Minkowski space-time, Minkowski envisioned a kind of hyperspace in which events do not just 'happen'. Rather, they already are embedded in the space-time metric (geometry) and one comes across them, like towns along a highway (cf. Whittrow, G.J. 1972, The Nature of Time, Pelican Books, Great Britain, p. 103.) For example, imagine the Minkowski temporal scale:


where E1, E2 and E3 are three events, say: E1 = Explosion of the Hindenburg dirigible, E2 = John F. Kennedy's assassination, and E3 = some future asteroid impact in the 21st century. In the Minkowski hyperspace these have always been on the timeline, which is traversed in the same way one would traverse a space. Thus, one encounters the various events on the timeline as s/he might encounter towns or villages along a highway.

Movement can occur in time or in space, and have a complementary (space or time) equivalent. For example, stay where you are and let one minute elapse on your watch. You have performed a 'movement in time' without a corresponding movement in space. We say you have traversed imaginary space. This imaginary space can easily be computed:

That is, you have traversed 18 million imaginary kilometers or 11.25 million miles in imaginary space. (Im(x) is the symbolic representation for an imaginary space (x) transition). Now, think of a movement in real space, but none in time. Is this possible? Well, I can get out my telescope and observe the Moon instantly - bearing my consciousness upon it - without taking the time to travel there. For all intents and purposes I am there. In this case, an imaginary time interval is the result, and again can be computed:


That is, 1.28 imaginary seconds to get there. I note here that this imaginary time interval is equivalent to a real space interval: 384,000 km (space distance to Moon) = 1.28 i seconds. Thus, imaginary time and real space are interchangeable. This has prompted at least one observer of the situation (to do with Minkowski spacetime) to observe (Whittrow, op. cit., p. 104.):

“In other words, the passage of time is merely to be regarded as a feature of consciousness that has no objective counterpart.”

Therefore there can be no such thing as time external to the physical universe. Timespace has a beginning.

The problem is that Anders conclusion doesn’t follow from his simplistic reasoning, e.g. that time is a simple operational unit, nothing more. As I showed, time is both much more than this and none of it (if totally predicated upon consciousness) so it clearly can’t be pigeonholed into such an artificial conception. Indeed, to make Anders’ definition work, one would have to assume or embrace the existence of an absolute time – invariable for all observers, which we know had to be abandoned in real science (see: ‘The Road To Reality’, by Roger Penrose, p. 409).

Beyond this, Anders still doesn’t grasp what is meant by the energy-time uncertainty principle, or how it applies to spontaneous inception of the cosmos. In addition no one says that time (as a fundamental property) is “external to the physical universe”. The negative pressure- vacuum bubble was no less physical than the universe it spawned on expansion – when the negative pressure fluctuated and incepted a non net-zero mass-energy effect, which result we now perceive indirectly in the cosmos accelerated expansion.

“We assume the universe made a transition from a quantum to a classical limit around eta = eta-bar, which is taken to be close to zero. Correspondingly, we take (alpha)^ to be ~0 with alpha(1) >> alpha(2).

“By assuming the universe to be an empty, quantum gravitational spacetime for eta >> eta-bar one can accommodate matter creation in the theory. Continuity of the metric across eta = eta-bar leads to the condition:

Since as he notes, continuity of all derivatives of the metric exists at: eta = eta-bar, then it follows there is no “external” or discontinous region.

Rather than belabor this any more with Anders’ ridiculous arguments, it would be better if he actually read the paper, and paid especial attention to Sec. III, ‘Geometry of the Quantum Universe’. Note the functions used, and how they are treated in the context!

The person stating otherwise needs to refute the mentioned scientific facts for him/her to make his/her position valid. Opinions based on no facts has no scientific value.

Nonsense, because you have not mentioned any valid scientific facts, only what you surmise to be such. You are totally ignorant of the nature of time, the extent of its applicability in different domains, and probably do not even know what proper time is, or how defined. Contrary to your assertions, YOU are the one in possession of no facts, and hence your writings have no scientific value. I am sure they may comfort all the religionists that flock to "Anders' Blog" but they do nothing to validate any of your claims.
Posted by Copernicus at 11:34 AM

Terrific piece! It is clear than Anders Branderuds is merely a more sophisticated variant of Pastor Mike. Maybe with about five years more in university qualifications. Other than that, he is the same, and never seems to move on to develop his points in a comprehensive way.

The way you took apart his childish concept of time here is something else. Even better than your earlier demolition of his causality notions.

If I were Anders, I believe I'd stick to analyzing Disney Cartoons, or maybe the meaning of Harry Potter's "death eaters".

That's probably more up his alley.

I believe you hit it exactly right, Caleb. I couldn't have put it better!