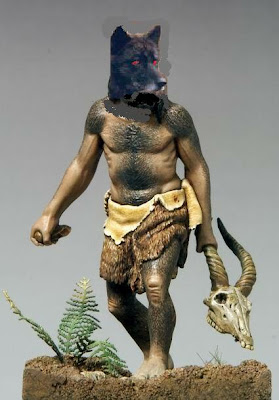 The image depicted at the top shows a Wolf-Neandertal creature, engineered by recovering Neandertal DNA (say from an excavation or Neandertal burial ground) and then splicing it with Wolf DNA. Is this feasible? Not long ago, we had received the news that a team from the Pennsylvania State University - using hair samples from two woolly mammoths - one 60,000 yrs. old, the other 18,000 yrs. old (Neandertals died out about 36,000 years ago) - had realized they could bring back a mammoth by the simple expedient of placing the DNA inside an elephant's egg. The mammoth would then emerge from its elephant mother - though doubtless that poor mother would perish in the process.

In much the same way, some have mentioned recovering T. Rex DNA, say from a prehistoric (Jurassic era) mosquito trapped in amber. The removal of the T. Rex DNA would be a simple thing, and it would only be left to locate a suitable host to ensure its proper gestation, and then birth. Worldwide we hear that such a thing would never, ever be attempted and it is "impractical" - but one thing we know about inquisitive humans is that if a thing can potentially be done, it will be attempted.

Now, the Wolf-Neandertal would require something far more sophisticated than simply a Neandertal DNA specimen being placed inside a female wolf body and brought to fruition. It would require the culturing of a genetic hybridoma - an actual genetic blend of the two differing creatures.

This has been done already to some extent, as with mouse-human hybridomas, though none of these were allowed to get to a stage of mitosis past about 22 divisions. In Vance Packard's notable shocker, The People Shapers, he noted that the Chinese had reached the stage of more than 10,000 mitotic divisions for an ape-human hybridoma, before it became unstable. Evidently, they had planned to augment their three million man army using ape-human fighters.

While the thought of facing a mass of ape-human soldiers is probably appalling, I don't believe it is nearly as appalling as the recent efforts to bring back long since extinct (or dormant) diseases, for "general study and research of course". Most people already know, for example, how the 1918 influenza virus was re-engineered using remnants of the DNA recovered from a dead Eskimo in Alaska (who died from it) and merging it (splicing) with modern forms to complete the genome. The end product is evidently just as virulent and deadly as the original that offed 50 million people. Let us hope that it remains safely locked up in the vaults at Ft. Detrick, MD or wherever they have it now.

More recently, genetic researchers have successfully brought back a bacteria extinct for over 12 million years. Evidently by recovering it from some long dead arthropod's body. One wonders, however, when luck runs out and these "researchers" manage to bring back a virus or bacteria long since dead and for which no human has any resistance.

Just how far can these things go?

Drew Endy (now at Stanford, earlier MIT) talks blithely about being able to design our own offspring. (New Yorker, Sept. 28, p. 61). For example, if one worried about having a kid who would turn out to be a bible-punching believer fanatic, all that one would need to do is to splice out that segment of the genome or genetic code that gives rise to religious ideation. As Endy notes it is pretty straightforward:

"You just decode a genome, take it off line to the level of information- in other words, brak it down to its specific sequences of DNA the way one would break down the code in a software program. We can then design whatever we want and recompile it"

The future is limitless, indeed only circumscribed by the imagination? Want an unusual pet, not just a dog or plain lizard, or snake? Then design a special "pet" with three heads (dog, lizard, snake), perhaps- and the body of a large komodo dragon. what is a pet after all? As Endy puts it (p. 65):

"A house pet is just a domesticated parasite. It's evolved to have an interaction with human beings. Same thing with corn, a crop that didn't exist until we created it!"

What if you wanted to build a super-atheist kid? Again, no problem - as Endy (and his peers) put it, it is just a matter of recognizing the arrangement of the four basic nucleotides (A, T, C, or G) that make up most atheists in their genomes, say like:

then programming it in. At the same time the "believer" components (which are directed mostly from the temporal lobes as Michael Persinger's experiments have shown) are excluded. You have basically "stitched" a super-atheistic human from scratch.

Can millions or billions be made? Sure, since the same decoding and stitching can be mass-produced with powerful effect. One has a particular template, and you just employ it on a vast scale.

Endy notes that in cases like the above, the proteins produced by one code arrangement can act to counteract or mute others. By the same token, they can also be used to enhance others. Say the atheist arrangement works in tandem with a prolific writing or research aspect, then both can be augmented together.

Do we really want to create a world where atheists or super-atheists outnumber believers and bible-punchers by 10 or 20 to 1? At first one might be tempted to say "YES!"

However, I suspect it'd be an awfully dull planet with no believers to poke fun at, or argue with.
Posted by Copernicus at 2:36 PM