Baby Dotard Barks "Treason!" As Stocks Dive - What You Should Know About This Market Volatility "WAAAAAH! Those Dems Is Treasonous For Not Clapping At My Speech!" 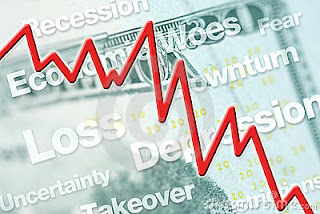 Even as the overgrown thug baby occupying the White House pissed his Depends at a speech at a company in Cincinnati (Sheffer Corporation)  yesterday he continued to bluster and bawl about the Democrats committing "treason". This because they refused to clap at the pathetic excuse for a State of the Union speech last Tuesday - when he barely managed to sound sane for an hour and twenty minutes.    At the Ohio company the fat con man and snake oil salesman yelped:

“Can we call that treason?  Why not? I mean, they certainly didn’t seem to love our country very much.”

Confusing love of country with ass kissing  this sleazy real estate criminal and Russian -backed stooge.. Of course, this fat turd is mad because one can't be guilty of treason for merely failing to applaud a farrago of lies.

But the interesting thing is that while this blubbering buttbrain was going on  about Dem "treason" the stock market plummeted by more than 1,000 points.  Even more interesting, as Diaper Donnie ranted, TV networks broadcast a jarring split screen. As Dotard  boasted of companies bringing billions of dollars back to America, the Dow Jones industrial average was shedding billions more. At one point, the rout became so drastic that CNN and MSNBC switched from the speech to report exclusively on the market gyrations.

Trump's delirious spiel about "treason" and inflating his effect on national economics coincided with the largest one day point drop in history.

This is where we get very serious and try to note the underlying reasons for what's going on. Higher wages threatening inflation and higher interest rates from the Fed has been one reason, and it is legit. While fatter paychecks are a welcome sight to workers (wages climbed 2.9 percent last month) they usually signal inflation for stock investors That in turn signals to them a Federal Reserve move to increase interest rates, meaning an end to the cheap money that's been fueling the stock bubble.

Right now the market is floating on trillions ($4 trillion to be exact)  of cheap money thanks to the generous Federal Reserve quantitative easing program. But the underpinning of this is really massive debt which hasn't been helped by the GOP tax cuts. These are projected to add nearly $1.5 trillion in deficits.

As yesterday's WSJ 'Business and Finance' headline blurted: Investors Fear Broader Asset Fall. Therein noting that over the past year stocks, emerging market currencies, commodities (like copper and gold) and high yield bond prices, have all risen in lock step.  However, this flashes red warning signs to global investors who (ibid.):

"had grown uneasy about various assets moving in lockstep -  especially because trading in many of these market isn't typically tied to share prices Such closely correlated movements are often associated with turning points in the markets."

Further, and most important:

"A sharp rise in asset prices can lead to an increase in leverage, or the use of borrowed money,before a turn in sentiment prompts a decline in prices that spurs forced selling as borrowers scramble to repay debt obligations..   That has some investors worried that even if some sort of market correction is inevitable, the number of markets that are moving in tandem raises the prospect of a more severe selloff than what the still positive fundamentals would warrant."

In other words, the lockstep asset prices could lead to a "mulltiplier" sell-off effect that would overshadow a normal correction, So if 10 percent is a normal correction and the DOW was initially at 25,000 or so, that would mean a loss (total) of 2500 points.  If this is a multiplier effect at work, we could instead be looking at a  20 percent correction, or a 5000 point drop  Do the math and you will infer the selloff isn't over, not by a long shot.  That doesn't mean it will dive today (though the DOW Futures indicates that) but we can expect weeks of gyration leading up to the debt ceiling increase. (Or what should be a debt ceiling increase!)

Let us note that debt:  municipal, corporate or (federal) governmental, is financed via bonds.  Investors purchase bonds at a certain rate and then see their yield increase or decrease. Generally, bond yields have now increased which explains why many foreign investors are bailing out of our stock market to buy bonds instead. They feel bonds are a safer bet and they're probably correct.

Just so you know, companies comprising the Standard & Poor's 500 index got 43 percent of all their sales from outside the country in 2016 - the last full year for which the S&P DOW Jones Indices has statistics. Indeed, the biggest U.S. company - Apple - got 63 percent of its investment sales from abroad in the most recent year for which stats were available.

As can be seen, our stock market stability is currently built upon the purchase power and holdings of foreign investors. If these investors bail, as in sell - then flee to bonds and sell them too - that means a "multipleir"sell off must ensue and that's what we're seeing now- as in yesterday's nearly 1200 point drop of the DOW.  The Financial Times, by the way, is already referring to what we've been in as a "bond bear market", meaning crashing prices, rising yields.

As per an article appearing in the Sunday Denver Post (p. 11A):

"The stock market finally got spooked by an ongoing sell-off in bonds.  As bond prices fall their yields go up, a sigaal of rising interest rates. Low interest rates have been an underpinning of the current bull market in stocks now for the ninth year."

Now, go to the WSJ headline on Feb. 2nd ('Deficits Shake Up Treasury Bond  Issuance'), in which article we learned the Trumptard- GOP tax cuts boosted borrowing needs at a time of shifting demand for debt. Just as regular bond yields are rising, we learn that Treasury bond yields are as well. (The yield on the 10-year Treasury climbed to 2.84 per cent Friday  from 2.79 percent Thursday.  That may not sound like much difference, but over a 1-day  interval it's colossal.

This is not a good thing because  "investors think the supply of government bonds hitting financial markets is rising as budget deficits grow as a result of the Trump administration's recent $1.5 trillion tax cut."

As a result, the Treasury Borrowing Advisory Committee (TABC) has estimated the Treasury will need to borrow a net $955 billion for the fiscal year that ends Sept. 30th.  For reference, this is up from $519 b the previous year and discloses a radical increase in debt (and deficits) traced to the recent tax cuts. Worse, the TBAC has estimated borrowing costs will be even greater in subsequent years, e.g. $1. 083 trillion in 2019,  and $1.128 trillion in 2020.  This marks the first sustained acceleration in Treasury borrowing since the 2007-09 recession and also comes within weeks of the looming debt ceiling increase.

A warning heard from Eric Winograd, senior  U.S. economist at AllianceBernstein, ought to send chills down the spine of every equity investor, e.g.(D. Post, ibid.)

"We are rapidly approaching the point at which low rates will no longer provide support to the equity market."

What could go very wrong and send the current correction into a crash? Failure to raise the debt ceiling whereby we (as a nation) signal to creditors we don't plan to pay off what we already owe. U.S. debt is considered the safest of safe assets, which is why lots of other financial products are benchmarked to U.S. Treasury yields. If our creditors doubt they’ll receive full and timely payments, Treasury yields will rise, setting off a chain reaction of chaos and panic in markets throughout the world.

Note that technically  we  reached our borrowing limit in early December. Since then, the Treasury has been resorting to “extraordinary measures” to prevent default. This essentially means moving money around so we can meet our obligations without issuing new debt. At some point, though, those measures will get exhausted. And that some point is coming sooner than previously expected. In November, the Congressional Budget Office projected that Treasury would run through those extraordinary measures around late March or early April. But then Republicans passed their absurd tax bill.

The potentially most dire aspect is that the debt ceiling won't be increased.   If not, well ...look for lots of roiling market upheaval and volatility and a possible further correction or even crash. (Though I don't foresee the big one until October)..  Re: volatility, it should be noted that the Vix volatility index, Wall Street's  "fear gauge", shot to its highest level yesterday since the Chinese currency devaluation in 2015.

FT columnist Gillian Tett also has referenced other serious issues, including: too low interest rates have "fostered financial engineering", i.e. structuring ETNs (exchange traded notes) to make bets on volatility  - similar to how credit default swaps were used prior to the credit crisis in 2008. Also, Tett warns "regulators are finding it hard to keep track of the risks" because they are now so fragmented.

Among her other depressing observations: "the global debt to gross domestic product is now 40 percent higher than it was ten years ago."  In addition, "leverage has crept unnoticed into the corporate world".   How many corporations are now surviving on billions of borrowed money, risky loans, we have no idea. But when these debts come due the party could well end in a thudding crash.

While finance pundits - like Melanie Hobson on CBS this morning - talk soothingly of the "fundamentals" being fine and to "stay the course", they avoid mention of the enormous debt and leverage this market is based upon.   Also unmentioned amidst all the tax cut cheerleading is how previous cuts have spawned stock market crashes. See e.g.

All this is unfolding as Americans, flush with their  growing 401(k) balances,  are increasingly tapping them - whether for dream vacations or home remodeling projects. (Denver Post,  Business, p. 1K, Feb. 4th).   This is despite the money being taxed or even being hit with a 50 percent early withdrawal penalty. Quoting one of these irrationally exuberant folks in the piece:

"It is a hard decision but I think I will make more money in the stock market."

Of course, that is assuming no crash, which event  - if she's near retirement - would ensure her having to work 10 or 15 more years to make up the losses. No stock market rise goes on forever, all end in crashes and that's when the hoi polloi who can least afford it are parted with their cash  - with the richest investors (or those using flash trading) picking up the pieces.

The best advice one can offer in a volatile market environment is to not even think of withdrawing any 401(k) money no matter how "rich" you might feel. Remember it's only phantom money - on paper - until shares actually are redeemed.
Posted by Copernicus at 8:17 AM