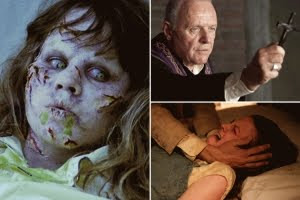 The recent news that a new school for exorcists opened in Illinois:. The Pope Leo XIII Institute for the “education & training of priests in the holy ministry of exorcism and deliverance” is depressing to say the least.   Just when the rationalist would have hoped that humans had finally abandoned primitive thought and come of age in the 21st century, one learns that this backward superstitious dreck is back in the news once more.

The current program was launched at the Mundelein Seminary in February — when the first cohort of trainees arrived for a 10-day seminar. For just $1,500 (plus $960 room and board; check and credit card accepted; donations welcome and tax-deductible), priests receive instructions from some top exorcists — using a curriculum that was reportedly pre-approved by a committee of credentialed bishops. (Are U kidding me?)

Of course, the media hasn’t helped by churning out idiotic headlines and via broadcast news that 'Exorcism is back!'  The  buzz? "is training a new class of priests to perform exorcisms to meet a growing public demand.”  According to one padre: Father Francesco Bamonte, president of the Italy-based International Association for Exorcists:

“Diabolical possessions are on the increase as a result of people subscribing to occultism. The few exorcists that we have in the dioceses are often not able to handle the enormous number of requests for help.”
So wait! Too many kids are getting hooked on Ouija boards, being seized by demons leading to  swiveling heads in 360 degree circles, babbling in Aramaic and projectile vomiting? Or is it that the assorted "news " has gone histrionic including  juicy interviews with priest-exorcists — and their lurid descriptions of what demonic possession purportedly looks like: “people babbling in languages foreign to them, shaking uncontrollably and vomiting nails, pieces of metal and shards of glass.”
Then you have padres expatiating on alleged dangers to the press, including the predictable line (as reported by the UK Telegraph in January:)


“The rise in demonic cases is a result of more people dabbling in practices such as black magic, paganism, Satanic rites and Ouija boards, often exploring the dark arts with the help of information readily found on the internet.”


Hmmm…… I dabbled in Ouija boards as well as “black Masses” (using the “Satanic Bible” of Anton Lavey) with other college friends in the 1960s and at no time was there ever a case of possession. Oh, there was one instance where the Ouija board pointer appeared to be stuck and wouldn’t budge. It then began to seemingly move of its own accord to the ‘west’ and stopped. We attributed it to a girl named Gail pressing on the planchette then pushing it that way – which is the only sensible conclusion a rationalist would draw.

Why dabble in this baloney? Oh, likely out of curiosity and .....probably because of the brainwashing we received in Theology class- as more or less encompassed in the class notes (from 1964) saved and shown here:

The point is that though we did much more than dabble,  no one got “possessed”, and no one expected to be!  The mighty limit law on inordinate bullshit states that:  “Only a finite amount of  bullshit and jabberwocky is allowed into reality at any one time and it is mutually exclusive with all forms of BS and jabberwocky operative at the moment”.  In other words the probability of demons manifesting from Ouija boards is vanishingly small.

While it is true that exorcism has been taught as part of Catholic theology – as my old Loyola notes show- no truly mature and rational priest or Bishop really believes that. It is merely fed to them, like the whole concept of “sin”, to keep the faithful at the level of malleable infants to be controlled. I left the Church precisely because I wanted to be an independent thinker …and doer. Not bound to any silly, centuries old dictates or dogmas.


According to the ’s new exorcism guidelines people who claim to be demonically possessed must be examined by doctors — to rule out the presence of physical or mental illness. Assuming that priests really do require medical clearance (they’re not regulated, so it’s hard to say), who is providing it? Who are these doctors—and are their actions in line with their obligations as medical professionals? We should be asking why and which doctors support the use of exorcism on people who believe that they are possessed by demons.

The basic problem with the whole exorcism shtick is that it’s based on primitive, superstitious gibberish.  Namely belief in a demonic entity in the first place. We can probably trace it back to Martin Luther. In his ‘Teufelsbucher’ or Devils’ Books, written from 1545- 1600, he laid out the whole warp and woof of how the Devil involved himself in human affairs.

According to this “first Protestant", the Devil was involved in everything that made life worth living: dressing up, food, party going, dancing to poetry, drama, writing. The Devil was behind virtually all the vices and manifestations of the world. Especially sex! The other bottom line made clear is that Satan was not to be trifled with or taken lightly. Woe to those (like atheists) who did, and all that!

But why the obsession?  Why the need for Satan, devils, or exorcisms at all? Little known by the demon mongering idiots is that in Yeshua's time, before the dawn of modern psychiatry, ordinary schizophrenia and schizoid personality disorders were commonly believed to be manifestations of  "demonic possession". Thus, we had biblical allegories and stories referring to Christ "casting out" Beelezebub from sick people, and even animals. But modern biblical scholars now understand these were metaphors for seeking cures (at that time) for the mental illness that stalked the population even then.

Further,  the Catholic Church's ritual of exorcism was founded and promulgated not on the belief that demonic possession was real, but that the afflicted person believed it was real. Thus, the rite of exorcism was initiated as a memetic template to cure the belief in the person's possession, not any objective possession per se. Up to now, indeed, no one has been able to prove beyond any reasonable doubt that any demonic possession has ever occurred, never mind absurd fictional portrayals like those in 'The Exorcist'.

Doubts that possession was real probably surfaced first just after the period of the Inquisition. This is because the tortures and executions of the Inquisition were self-sustaining, because none of the greatest theological minds could figure out how one might exterminate demons or Devils permanently by killing the allegedly possessed humans. Because they could not be killed, and could still possess humans (according to the Inquisition), then whenever you tortured a heretic or apostate to death  the possessing devil or demon would just skip to another forlorn soul, who in turn would have to be killed. With that possessing demon jumping to another ,…..and so on keeping the Inquisition’s fires and torture wheels going indefinitely.

Eventually, the Church's great brains figured out they could potentially slaughter every single living member of the "Body of Christ" yet not be able to get at the demons or Satan himself! In other words, their own feverish delusions were having them on, leading them to excessive actions and reactions that didn't do a damned thing to advance the welfare of the "Body of Christ".

Adding fuel to Satan-mania was the Malleus Maleficarum of Heinrich Kramer (Dean of Cologne University) and Jacob Sprenger (Dominican Inquisitor General of Germany). This was the book which gave the prescriptions for exposing those possessed, or under the influence of familiars or witches or other demonic entities (succubi, incubi) under a Bull issued by Pope Innocent VIII.

Because this book allowed persecution to spread to tens of thousands of women - as "witches" - it soon became evident to the best and brightest that belief in demonic possession was in fact a recipe for self-extermination, not purification!

At the very least it meant one half of humanity being exterminated, since generally, throughout the Middle Ages, the belief persisted that the female was closer by far to the demonic hordes, by virtue of her enhanced carnality. Indeed, the demise of male virtue as well as mental power could allegedly be traced to female wiles, and what better way to enhance them than using a herb like savin (given by a witch)

Given the “evidence” of any one or all of these the accused witch could be apprehended and subjected to “the question”. This meant usually prodding her flesh with special instruments to locate the mark of “the Beast” (666) or any similar mark usually associated with the Devil. If a first pass wasn’t enough gradually more pressure and torture would be applied, usually ending up in some sort of disfigurement being found eventually and attributed to the Devil. According to author Peter Stanford (‘The Devil’, 1996, p. 162):

“Witches and warlocks provided an easy target for the Church, intent on rallying the faithful with a bout of demonization”

Probably over a half million innocent women throughout the West underwent such appalling tortures merely to appease savage and depraved minds they didn't have a demon lurking inside them.

Thus, the road to rejecting demonic possession was replete with horrible suffering and endless death. In other words, nearly 2 million innocent humans had to be brutalized, maimed or slaughtered, before humans (at least in the West) figured out that retaining a belief in demonic possession did not redound to their benefit.

Sadly, while the curse of belief in demonic possession had retreated in the more enlightened West (thanks to the continuing benefits of rational skepticism and the Enlightenment) these dark ideas now seem to be making a comeback, thanks to anti-rationalists in the Church - as well as a 24/7 media that can't get enough bull crap to broadcast.

Not too likely. Decades of research discloses only limited value for psychotherapy, and in any case, the true believers and upper echelon (priest, bishops, ministers, preachers) are seldom subjected to treatments, only their forlorn victims.

What is needed is a non-negotiable agreement or contract that obligates anyone who practices religion in any form to reject demon-mongering – including all exorcisms or other manifestations that even indirectly validate the Satan-Hell myth.. And – if they do not – they must submit themselves for "demonic expurgation" by whichever method works the best and drives demonic belief from their brains.

Probably the optimum method right now is electro-convulsive therapy (ECT). Much different from the antiquated version (shown for example in the movie, 'One Flew Over the Cuckoo's Nest'), the new ECT uses milli-amp range bursts for brief periods of seconds to re-energize and renew the brain for improved reality cognition.

Yes, this is extreme, but given the horrific effects of demonic or Satanic belief it's clear we can't allow it to seize control of more vulnerable minds. Thus, we have to treat those minds that initiate or spread the beliefs at their source as major sources of mind virus infection.

A last possible option, but not yet developed, is the implantation of quantum dot electrodes in strategic parts of the brain, such as the amygdala and temporal lobes.

Quantum dots are tiny ( ~ 1 -2 nm) conductors that operate to control, electrical -neural information loads. They're small enough to be integrated with brain tissue, neurons to alter brain functions, including eliminating Satanic ideations. This can be effected via the replacement of primitive neural maps residing in the brain's "fear center" or amygdala, with more organized neural maps which strip the atavistic residue as they are impressed

If we can thereby eliminate the belief in "demons" we can surely eliminate "exorcism" as a prescription to eject demons which do not exist. Maybe more priests need training in psychotherapy, as opposed to exorcism.

Posted by Copernicus at 5:45 AM