Dark Energy - Evidence for a New Law of Physics? 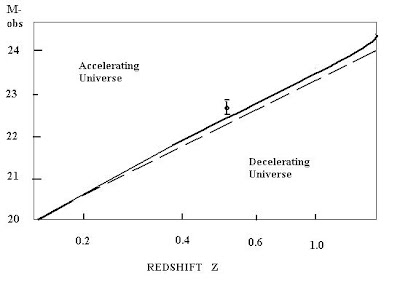 Before 1998, few if any astronomers had heard of “dark energy”. Rather, “dark matter” had come to the fore with a series of articles in various periodicals, journals (e.g. Physics Today, (1992), Vol. 45, No. 2, p. 28 by S. Tremaine) Dark matter was acceptable to most of us because at least it could be understood easily at some level. After all, Fritz Zwicky in 1933 actually laid the original, observational basis for dark matter. His measurements of galaxy clusters highlighted a 'missing mass'. He found that the mass needed to bind a cluster of galaxies together gravitationally was at least ten times the (estimated) apparent mass visible.

This mass, because it was inferred but not directly detectable, became the first dark matter. Around the same time there were other confirmations, based on observed stellar motions in the galactic plane by Dutch astronomer Jan Oort. He determined there had to be at least three times the mass visibly present in order for stars not to escape the galaxy and fly off into space.

By the time of Tremaine’s Physics Today article, it was estimated that at least 90% of the universe was in the form of dark matter, and barely 10% constituted visible matter – meaning that it either reflected radiation or emitted it at some wavelength. Many of these results issued from the data acquired by the Cosmic Background Explorer (COBE) satellite.

By 2000, this whole picture had radically changed and new assays for the mass-energy distribution for the universe had ordinary visible matter at only 7% of the total, with fully 93% a “dark component” - of which nearly 70% was dark or vacuum energy, the rest dark matter. (See, e.g. Physics Today, July, 2000, p. 17)

This was almost too much to take. Of course, as a physicist (in solar physics at that time) I’d been familiar with the claim of vacuum energy in various crank forums, or via e-mails from cranks. Most of them embraced the notion that empty space was replete with vacuum energy at an almost infinite density level – and accessible if one can only get to it. Free energy without the hassle of infrastructure!

In no way did anyone – even those astronomers least conversant with modern cosmology – expect the most distant objects to exhibit a slowing down, and the closer ones to exhibit a speeding up: indicating the expansion was accelerating, and worse, that a counter (repulsive) force to gravitation might be operating. However, not when two separate groups find supernovae that are dimmer – and thus further away – than they should have been,

But in science, meticulously obtained and plotted data seldom lie. And by early 1998, the type Ia supernova results of two groups: the Supernova Cosmology Project (based at UC Berkeley) and the High- Z Supernova Search - led by Brian Schmidt of Mt. Stromlo Observatory in Australia, began to show tightening error bars.

Why Type 1a supernovae? First, because they’re bright enough to isolate in different galaxies – hence there’s a cosmological dimension. Second, they exhibit a uniform, consistent light spectrum and brightness decay profile (all supernovae diminish or ‘decay’ in brightness after the initial explosive event). This applies to all galaxies in which they appear so they function as cosmic standard “candles”. Third, all Type 1a’s betray the same absorption feature at a wavelength of 6150 Angstroms (615 nm) - so have the same spectral “fingerprint”.

Basically, the majority of plotted Type 1a supernovae data points congregated along the upper of the two plot lines shown in Figure 1. (One sample point is shown) This placed them firmly in the region of the graph (of observed magnitude vs. red shift) we call “accelerating universe”. On the other side of the diagonal is the "decelerating region". An additional feature of the accelerating side is 'vacuum energy'.

While my first instinct was to reject the notion of vacuum energy, this didn’t withstand further examination. The bottom line is that the best fit to the supernova data indicate that the energy density of the vacuum translates into a repulsive force that can counter gravity’s attraction.

To get an insight, we can examine the equation that underpins cosmic expansion and whether it is accelerated or not (cf. Perlmutter, Physics Today, 2003)

Here R is a cosmic scale factor, R" is the acceleration (e.g. second derivative of R with respect to time t), G is the Newtonian gravitational constant, rho the mass density. We inquire what value w must have for there to be no acceleration or deceleration. Basic algebra shows that when w = -1/3 the whole right side becomes zero. The supernovae plot data constrains w such that it cannot have a value > (-1/2). Most plausibly, w, the ratio of pressure to density is (Perlmutter, ibid.)

This is consistent with Einstein's general theory of relativity - which one could say approaches the status of a 'basic law of physics'. In this case, a negative pressure meshes with general relativity's allowance for a "repulsive gravity" - since any negative pressure has associated with it gravity that repels rather than attracts.

Some might argue that cosmic repulsion shows a "new law" of physics, but it's merely extending the existing concept of gravitation to show it has a repulsive as well as attractive aspect, and has always been consistent with Einstein's general theory of relativity.

This brings us to the question: What’s to become of the cosmos if the acceleration is ongoing? Clearly, photons emerging from whatever cosmic object (star, nebula etc.) can never catch up to the (too) rapidly expanding space-time. This means that over time, fewer and fewer objects will be visible to any sentient observers. Eventually, all cosmic objects will “vanish” from the scene and all observers – if any remain- will be plunged into featureless skies.

(To be continued)
Posted by Copernicus at 2:00 PM