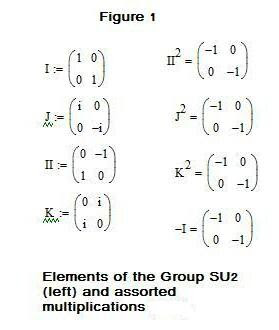 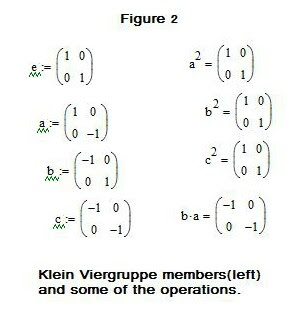 In an earlier blog we examined the fascinating mathematical structures called groups. We recall here the properties that make a group, from the definition given:


A GROUP is a set G with one binary operation defined on it , and G satisfies the axioms:

There was also the additional property that defined an Abelian Group:


We now want to see how these apply to groups that are posed in matrix form.

A matrix is an assembly of numerical quantities in the form:


Matrix multiplication, the main operation we will need to know, is easily obtained.

I.e. say the above matrix is denoted A, and another B =


For example, let A=

The reader is invited to verify this for himself.

We are now in a position to look at some simple 2 x 2 matrix groups, and also assess whether they're Abelian or not.

Another interesting group is PSL(2, z) which has generators:

Yet another group with 2 x 2 matrix elements is sl(2) which has elements: h, e and f such that:

The elements of the group can easily be shown to obey the relations:

using the designated elements assigned earlier for the generic matrices A, B)


Then there is the famous Klein Viergruppe with members: e (identity), a, b and c. The 2 x 2 matrix members are shown in Fig. 2 along with 4 different operations.


The ambitious reader can gain further insights via the following exercises!

3. Show that the Klein Viergruppe, V4, is Abelian.
Solutions to be given in a future blog!
Posted by Copernicus at 12:00 PM